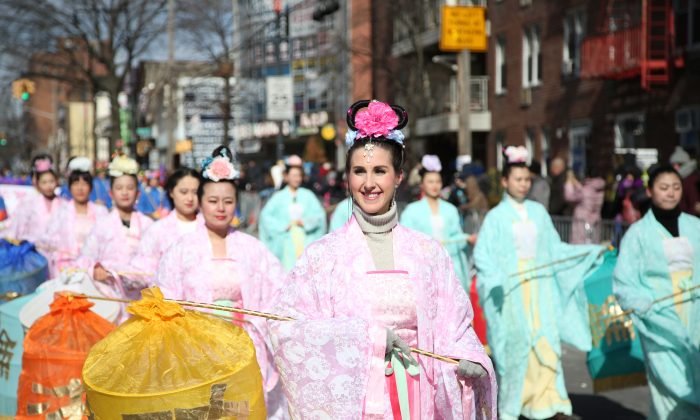 NEW YORK—Harsh wind chills on Feb. 13 may have thinned the crowds on the streets for this year’s Lunar New Year parade in Flushing, but many still gathered to watch the colorful procession of floats and performers—even if it was from behind the windows of Chinatown shops and malls.

Performers from various organizations and ethnic backgrounds, primarily Chinese- and Korean-American, stood up to the 11-degree weather with dragon and lion dances, drumming, the graceful steps of women depicting heavenly maidens, and even a full marching band.

Since 1996, Flushing Chinatown has celebrated the Asian holiday season with New Year parades of growing scale.

Danielle, a Flushing local, has attended the parade and its performances for the last six years because of her abiding interest in East Asian culture.

“Chinese culture just kind of melts into everything,” she said. “I just think it’s really good that they come out even though it’s freezing cold. They participate in something that’s for everybody so they can enjoy it. It’s really nice.”

While the parade enjoyed wide participation, it has special significance for one group in particular: the practitioners of the spiritual discipline Falun Gong (also known as Falun Dafa.) Banned and brutally persecuted in China, Falun Gong practitioners take joy in taking part, and being welcomed in, a public celebration. While everyone felt the harsh chill, there was nevertheless a certain jauntiness in the practitioners’ march on Saturday.

Simon Vereshaka has also been to the parade for the last six years—as one of hundreds of participants in the processions representing Falun Gong in New York. This year, Vereshaka manned a banner flanking one of the group’s spectacles, a lion dance.

“I practice Falun Dafa, so it has always been an honor,” said Vereshaka, who took up the traditional Chinese self-improvement system in 1998. Falun Gong includes fives exercises, and teaches adherents to conduct themselves according to the principles of truthfulness, compassion, and forbearance.

He does it for the audiences. “I get a really rich feeling because I’m really happy that they are watching us, and they are smiling and they are happy to see us. It’s wonderful.”

Chinese-speaking members of the audience enjoyed the jubilant atmosphere and cultural bonanza.

One Chinese woman who brought her eight-year-old son said she was “thrilled to see the parade.” Her son was particularly taken by the dragon and lion dances, which his mother praised for their strong Chinese feel.

“I’ve been here for three years and there isn’t much in the way of [Lunar] New Year atmosphere,” she said. “Only today, when I see the parade, can I feel the atmosphere. I got up really early to see it.”

Aside from the lion dance, Falun Gong adherents and performers from other groups, including multiple Korean societies, depicted a wide variety of traditional arts.

Mengzhu, a 13-year-old Falun Gong practitioner who moved from China last May, participated in the parade for the first time as a heavenly maiden. “The makeup and regalia of the heavenly beauty is a really pretty ancient costume,” she said. “It is one of China’s traditions and represents China.”

For those who practice Falun Gong, the freedom to express and exercise their faith openly in this year’s New Year event stands in marked contrast to the situation in mainland China, where it has been violently suppressed by communist authorities since 1999.

Zhang Yuhua, formerly a Russian language instructor at a Chinese university, recently emigrated to the United States after years of persecution by the regime. It is her first time taking part in the Flushing New Year parade.

“It’s a spectacular scene,” Zhang said. “People from the mainland can see from this parade that all kinds of people from different races who holding different beliefs all have the freedom of belief and choice.”

Zhang, who began practicing Falun Gong in 1998, was detained for years by the Chinese police. “Thinking of the life that I had when in mainland China, there was no human dignity.”

“The image of the heavenly maiden is one that is dignified, pure, and holy,” said Catherine, a young Chinese woman who has played the part every year since 2010. She says practicing Falun Gong gives her what it takes to wear the thin costume in freezing weather.

“It is worth it if we can bring an auspicious and peaceful messages of peace to the Chinese people for the Lunar New Year,” she said.

Catherine came to the United States from China for secondary education, and recently completed a master’s degree in management science at the Rensselaer Polytechnic Institute.

She began practicing Falun Gong in 1997 and feels that the parade is a potent means of counteracting the propaganda that the Chinese regime has spread at home and abroad to portray Falun Gong as unusual, or somehow anti-social.

With additional reporting by Juliet Song.