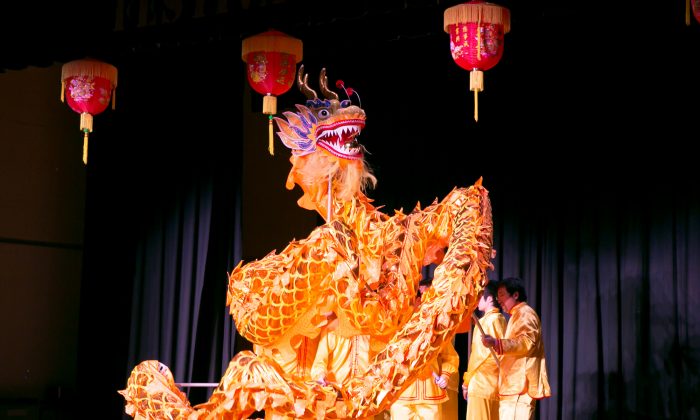 WASHINGTON—Want to celebrate the year of the dog? Then the 11th annual Chinese New Year Festival in Falls Church, Virginia, on Saturday, Feb. 10 should be on your calendar. Admission is free.

Those who come to the Luther Jackson Middle School will feel, said the festival’s Tiny Tang, as if they have arrived in China. The traditional decorations not only have the authentic look of decorations in China, they have the spirit of the scene in China.

Chinese people will feel, Tang said, as if they have come to the town’s temple or fair. Westerners will have a chance to learn about Chinese culture.

At the festival, there will be performances all day, including dragon and lion dances, traditional Chinese and other Asian dances, music and singing, and martial arts demonstrations. There is lots of Asian food, booths with crafts, games, and, at 2 p.m.—a parade that winds its way through the school.

The Lunar New Year is the most important holiday, not only in China but in all of Asia. Tang said the holiday involves looking back at what one did in the year just ending, and looking ahead to the year that is coming.

According to the traditional way of thinking, at the end of the year, one is taking stock and reporting to the gods what one has done, Tang said. There may be some punishments in store for those who have done poorly.

In order to help the new year be auspicious, one wants to drive away any evil that may be at hand. So, one wears red and makes loud noises, banging things, and setting off firecrackers, all to scare the evil away.

People are also careful with their thoughts, Tang said. At the new year, one only wants to speak in a positive way; one doesn’t want to have bad thoughts. If you think of something, that will become true.

In what may be the sweetest part of the celebration, one unites with one’s family while eating special foods symbolizing happiness, longevity, prosperity, and harmony in the family.

Tang said the mission of the festival is to promote Asian culture, and in particular traditional Chinese culture and values. This year is the year of the dog, which is known for the virtue of loyalty. And so this year’s festival has made the virtue of loyalty a theme. Both President Donald Trump and his son Barron were born in the year of the dog.

In a new feature, children will have the opportunity to go on stage and recite two traditional Chinese poems. There will be a group of native Chinese speakers and another for non-native speakers. Those selected to recite on stage will receive a prize for participating.

Tang said that for those who grew up in China, the new year provides many happy childhood memories.

She says the same thing is true today for children who come to the festival. “They give their whole heart to the event.”

She said that children who had attended the festival when it first started 11 years ago are now returning as volunteers to help run the festival.

Tang said local VIPs, including members of Congress, have supported the festival with proclamations and letters. They come to the festival to take part in a ceremony, but then often linger through the day, and sometimes take part in the parade.

Tang, who does marketing for The Epoch Times and for NTD, and Mindy Ge, an actuary for a local insurance company, started the festival 11 years ago after they found the local options for celebrating the Chinese New Year unsatisfactory.

Tang said that everyone likes to see the dragon dance and the lion dance, and she and Ge had gone to Chinatown a few times for the New Year celebration. It was less than an ideal experience. The performance was outdoors, and it might be cold or even raining. If one was not at the right spot on the parade route, one would not even get a chance to see the dances.

They decided that if they held an event indoors, that would benefit more people. And so, with that wish to bring something good to others, the festival was born.