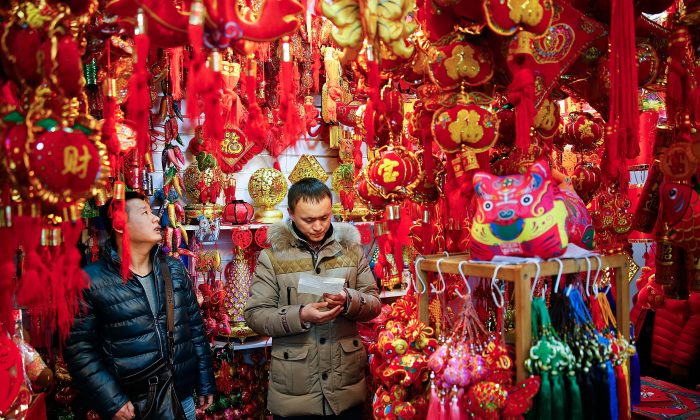 Chinese New Year Decorations Must Be Politically Correct in China

With the Lunar New Year fast approaching, people in China are preparing to put up decorations like lanterns and red scrolls bearing festive calligraphy to celebrate the joyous holiday season. As for what’s written on the scrolls, though—that must now keep within the strict guidelines set by the Chinese Communist Party.

The Central Propaganda Department has instructed Party officials to see that spring couplets carry calligraphy that “propagates socialist core values.” Local authorities were told to organize poetry and couplet associations to “inspire residents” in crafting spring couplets; the goal is to create “positive energy at the street level.”

This time I might not return.
— Cui Shuyong, detained for displaying couplets that included the word 'compassion'

The instructions were circulated to municipal and county authorities at the end of December in a document posted to the websites and social media accounts of two municipal governments in the central Chinese province of Henan.

Issuing the instructions appears to be a means of enforcing ideological and cultural control over an area of cultural life that has for a long time been free of overt Party control. Over the years, however, things have ended badly, even tragically, for Chinese citizens who decide to use spring couplets to challenge official policy.

Spring couplets are a festive variant of the traditional Chinese couplet, two pithy lines of (usually rhymed) verse. Each line carries the same number of Chinese characters, which typically spell messages of good fortune, prosperity, and well-wishes. With a history going back thousands of years, spring couplets are believed to ward off evil spirits and reflect the hopes for the coming year.

Placed above and beside the door, they also serve as colorful decorations.

Ancient Chinese would engage scholars, preferably good calligraphers with an upright and virtuous character, to inscribe spring couplets on red scrolls with a bamboo brush dipped in black ink. Nowadays, spring couplets printed in golden characters on red paper are mass-produced in factories.

During the Lantern Festival, which falls at the end of Chinese New Year, Chinese often hang red paper lanterns adorned with yellow tassels. The festival is at the end of New Year celebrations, and falls on Feb. 22 this year.

Gone are the days when the Communist Party attempts to eliminate traditional culture—now, propaganda authorities are simply trying to ensure that their own messages are smuggled out using traditional mediums.

For instance, couplets bearing the image of Chairman Mao Zedong with faux verses—”On the Reddest Red Day, He is the Heaven’s Child,” says one of them, aside Mao in a green military jacket as he reads an official report—are sold on Chinese e-commerce platform Alibaba.

But Chinese citizens who go rogue with their door couplets can find themselves in trouble.

Mr. Wang, the owner of a hotel in Nanjing, had spring couplets ripped off the doors of his hotel because he kept them around for too long, according to official reports in 2014.

Those who put up spring couplets with politically sensitive content get harsher treatment.

Huang Yuhua, a resident of Changjiang Village in the southern China province of Guangdong, posted a pair of couplets that read, “Falun Gong and Truthfulness Compassion Forbearance are Good—The World Knows Falun Dafa is Good” on her door on Jan. 27, 2007, according to Minghui.org, a clearinghouse for information about Falun Gong. Police later imprisoned Huang in a detention center.

Practitioners of Falun Gong, a traditional Chinese self-cultivation practice, have been brutally suppressed by the Chinese regime since July 20, 1999, for performing gentle exercises in parks and adhering to principles of truthfulness, compassion, and tolerance. According to incomplete information on Minghui, over 3,900 practitioners have been killed, and hundreds of thousands of others languish in labor camps.

Tragedy befell Cui Shuyong, a Falun Gong practitioner in the central Chinese province of Henan, after he put up spring couplets on the gates of his house in 2005. Three police officers gave Cui a vicious beating because the word “compassion”—a Falun Gong principle—was in couplets, according to Minghui.

As the police hauled Cui away, he turned to his wife and said: “This time I might not return.” He had just served a four-year sentence of forced labor for petitioning the authorities in Beijing.

For the spring couplets, Cui was handed two years’ forced labor, a stint he survived. After spending the following years in and out of detention for keeping his faith, Cui was severely tortured in a detention center in Hebi City, and died on Nov. 20, 2013.