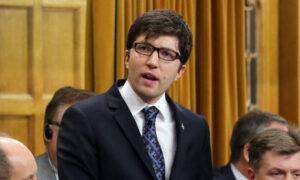 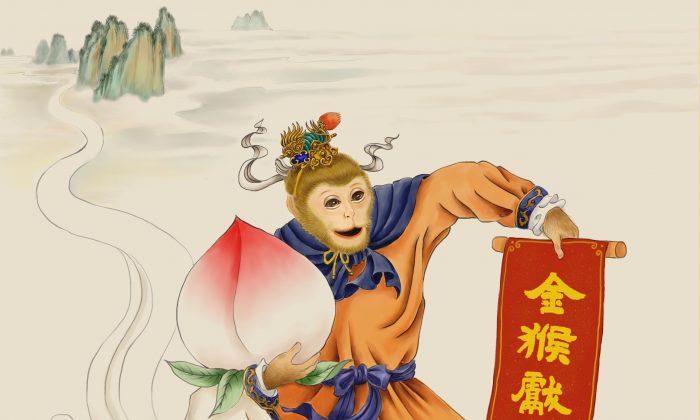 The Chinese New Year occurs on Monday, Feb. 8, this year, marking the start of the Year of the Monkey, a symbol of creativity and inspiration. The Chinese characters say “Golden Monkey brings a Happy New Year!” (SM Yang/Epoch Times)
China

A tribute to the Monkey King from the classic novel 'Journey to the West'
By Cindy Chan, David Wu and Tanya Harrison
Print

Feb. 8, 2016, marks the Chinese New Year and the beginning of the Year of the Monkey, a symbol of creativity and inspiration in the Chinese zodiac.

Celebrating these themes in honour of the Year of the Monkey is a perfect time to share the story of the legendary Monkey King from the classic novel “Journey to the West.” With his fantastic martial skills and supernatural abilities, the Monkey King not only displays mighty power but also demonstrates the awe-inspiring strength and dignity of the force for good.

The Monkey King not only displays mighty power but also demonstrates the awe-inspiring strength and dignity of the force for good.

Published in the 16th century during the Ming Dynasty (1368–1644), “Journey to the West” is one of the four greatest literary masterpieces produced in dynastic China.

The adventure-packed novel takes place in the 7th century during the Tang Dynasty (618–907). It tells the story of the journey of Xuan Zang (also known as Monk Tang) and his disciples to what is now India, with the hope of bringing the sacred Buddhist scriptures back to China.

Monk Tang’s disciples consisted of the ingenious and talented Monkey King, the often lustful and lazy Pigsy, the reserved and diligent Sand Monk, and the quiet and loyal White-Dragon Horse.

These four immortals had all been banished to the human world because of sins they committed in Heaven. The merciful goddess Guanyin gave them a final chance to atone for their sins and return to their celestial home—by converting to Buddhism and protecting Monk Tang on his pilgrimage.

On their journey, the group encountered a staggering series of 81 trials and hardships. Using force and deception, a myriad of demons and evil spirits tried to stop them by various means. They were especially eager to capture Monk Tang, as it was believed that his body had been purified through 10 reincarnations and that one would gain immortality by eating his flesh.

Celebrating the Year of the Monkey: Chinese New Year 2016

Overcoming incredible odds, the pious pilgrims triumphed over their tribulations and in the end returned to China with the holy scriptures.

Born From a Magic Stone

Born from a magic stone, the handsome Monkey King became king of the monkeys as a result of his wit and cleverness. He developed supernormal powers and many magical skills under the tutelage of a Daoist master, who named him “Sun Wukong,” which means “monkey awakened/enlightened to emptiness.”

Full of mischief, however, the Monkey King created chaos in Heaven and below. The Jade Emperor of Heaven attempted to pacify him by granting him auspicious titles. However, the Monkey King considered them of low status and dubbed himself the “Great Sage of Heaven,” rivalling the status of the Buddha. In arrogant rebellion, he wreaked even greater havoc in the heavenly palace.

For his transgressions, the Buddha trapped him under a mountain for 500 years. When Monk Tang finally passed by one day, the Monkey King realized this was Guanyin’s arrangement. He pledged his fealty to the monk and the sacred journey and was thus freed from his captivity.

The Monkey King proved to be invaluable to the mission. Neither deceived by demons’ disguises nor tempted by beauty or riches, his keen perception and fantastic powers delivered Monk Tang from many perils.

In Chapter 27 of the novel, the Monkey King used his mighty powers to destroy a particularly evil monster.

As the story goes, one day Monk Tang and his disciples entered the mysterious White Tiger Mountain Range, where the White Skeleton Demon lived. Wanting to seize the monk, the demon tried various tricks. It first transformed into a beautiful young girl. The Monkey King saw through the deception and killed the false “girl.”

Monk Tang, pure and kind though easily deceived, was horrified by this seemingly unwarranted violence. Before the Monkey King could explain, the demon tried again, this time transformed into a likeness of the girl’s mother. When the Monkey King killed the “mother” too, the gentle monk was beside himself.

The demon then transformed into the girl’s father. This time the Monkey King destroyed it completely. However, Monk Tang, fooled by the apparition, rejected the Monkey King’s explanation and expelled him from the pilgrimage.

Despite being wronged many times by his master, the Monkey King remained loyal to him throughout the journey.

Despite being wronged many times by his master, the Monkey King remained loyal and provided wholehearted protection to him throughout the journey. Even after being rejected, each time he could still be counted on to rescue the monk from the ensuing dangers.

As a reward for his great achievements helping his master obtain the sacred scriptures, the Monkey King received the title “Buddha Victorious in Strife.”

“Journey to the West” is packed with action and humour, but also filled with life lessons and principles exemplified by the characters as they prevailed over evil and surmounted perils one after another.

Among other insights, the characters inspire us to take focused action to realize our dreams, never give up on a meaningful goal, master our strengths, pursue lifelong self-improvement, and work cooperatively with others to become stronger as a whole.

The Monkey King character particularly symbolizes wit, intellect, loyalty, and tolerance. He also demonstrates persistence, optimism, concern for others’ welfare, and fearlessness as he consistently rescues the weak and defends what is right.

The Monkey King remains a totally lovable character from beginning to end.

Moreover, he has the ability to recognize evil in any form, reminding us that it is important to know when to look beyond the surface in order to understand the true reality of things that matter.

In addition, he shows us that goodness and benevolence embrace multiple meanings. These ideals not only include qualities such as gentleness, patience, forbearance, and humility. They also encompass dignity, strength, and not turning a blind eye to wrongdoing or evil deeds.

Despite some less desirable personality traits such as being restless, overconfident, quick-tempered, and unruly at times, the Monkey King remains a totally lovable character from beginning to end.