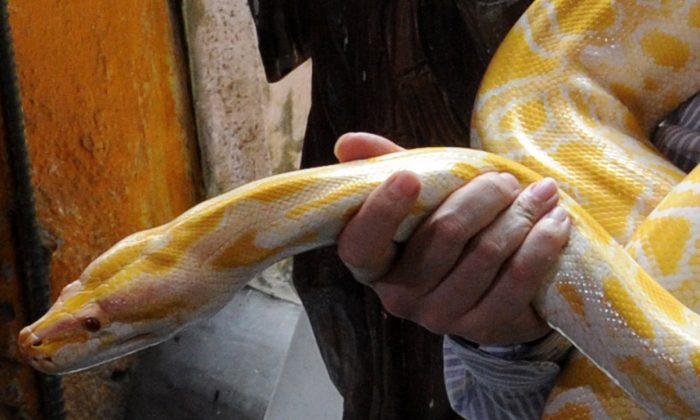 An albino python in the Philippines in 2013. (JAY DIRECTO/AFP/Getty Images)
China

A 7-second video showing a small brown puppy being attacked and constricted to death by an albino python belonging to a Chinese man has been been widely criticized in social media comments, not least for the fact that according to the owner, the dogs he feeds his pet snake are all adopted.

it is not known where the video was filmed, but Chinese can be heard spoken in the background.

Angry netizens applied human flesh search techniques to track down the social media accounts and photographs of who appears to be the man and forward the details to other platforms.

“It’s not that I values dogs over other species, but this guy is betraying the trust of others by adopting animals to feed his snake,” reads one concerned comment on Chinese social media. “Then he makes it into a video and puts it online, and he’s laughing! Nobody with upright moral values would support this, right?”

Another remarks: “An adopted dog! The adoption agencies will have to choose their owners carefully.”

“Snakes are cold-blooded animals to begin with, but this human is even more ruthless than the animal,” said another user. “How can you feed such a tiny, living dog to a snake? How cruel!”

Pythons are native to southeastern Asia and southern China and can reach lengths of well over ten feet. They are docile, non-poisonous snakes but have large appetites and must be handled with caution lest they attack humans.