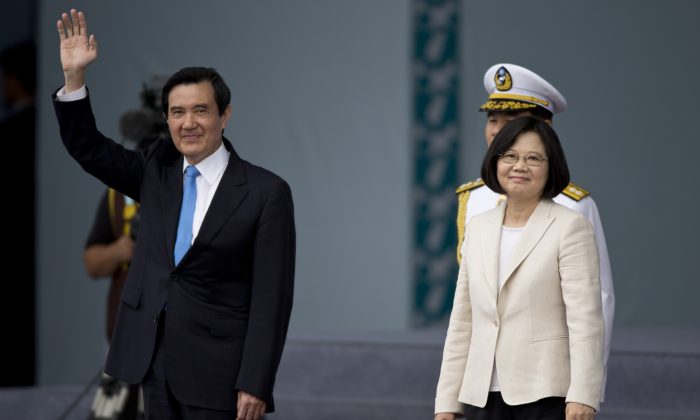 Taiwan President Tsai Ing-wen (R) and former Taiwan President Ma Ying-jeou (L) greet to the crowd on May 20, 2016 in Taipei, Taiwan. Chinese netizens are stunned to learn that Ma would be living in his old apartment after leaving office. (Ashley Pon/Getty Images)
China

With the swearing in of Tsai Ing-wen as president of Taiwan on May 20, outgoing president Ma Ying-jeou moved out of the presidential residence and back to his old, unimpressive-looking third floor apartment in the district of Wenshan in Taiwan.

Chinese internet users could scarcely believe their eyes upon discovering this detail from a news clip about Ma’s post-presidential situation—how could it be that the residence of the leader of a democratic Chinese island be less luxurious than the lowest ranking Communist Party official, or even a prison for purged Party cadres?

According to a video clip posted to popular news portal Sina, former Taiwan president Ma Ying-jeou was returning to the apartment that he had been living in for more than 20 years. The apartment was situated in a residential neighborhood, and conveniently located near eateries, a park, and a food market where Ma would tuck into his favorite dish—noodle soup with shredded pork and preserved vegetables.

“If there is a police officer about, you know he’s back,” said a local female resident. “He once gave a wave to us folks before leaving.”

On Sina Weibo, China’s version of Twitter, many Chinese netizens contrasted Ma’s living conditions with that of Chinese officials.

“I am not bluffing: Any village chief in China lives far better,” wrote “MaaaaJ_” from Jiangsu.

“His home is worse than Qincheng,” wrote Beijing netizen “The Normal Life of Mai Xiansen.” The netizen is referring to Qincheng Prison, a maximum-security, luxury prison in Beijing for high-profile Party officials.

If Ma had engineered a reunification of Taiwan and China, he could be living a very different post-presidency life, one Chinese netizen hypothesized.

“If unified, Mr. Ma would at least have his own villa, as well as police guards and beautiful housekeepers,” wrote “Bi Te Ke” from Beijing.

This is not the first time that the conduct of elected officials in Taiwan has left the Chinese netizens in amazement. In January 2015, netizens were stunned to see Taipei Mayor Ko Wen-je riding the subway without a security detail.