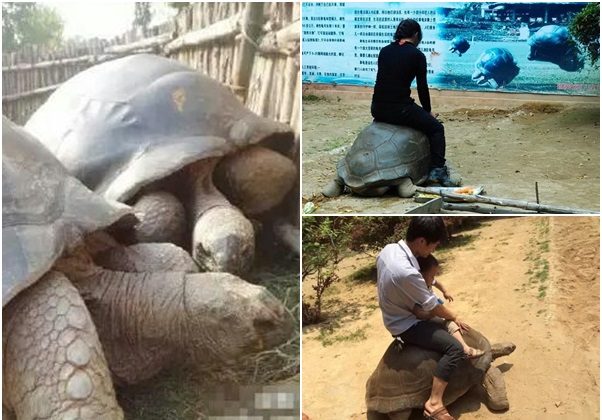 Photographs procured by Oriental Net, based in Hong Kong, show tourists riding giant tortoises at the Haicang Wildlife Zoo in Xiamen City, Fujian Province, recently. In some of the photographs the riders appear to be holding a screwdriver, used to prod the animal to walk. (Screenshot via Oriental Net)
China

Tortoises, especially giant ones accepted as diplomatic gifts, aren’t meant to give humans joy rides, or be spurred to do so with sharp objects. This is a fact that some Chinese tourists appear simply unaware of.

Haicang Wildlife Zoo in Xiamen City, Fujian Province, is home to a pair of Aldabra giant tortoises—one of the largest species of tortoises in the world—that were given by Mauritius to the Xiamen government in April 2012.

Upon receiving the tortoises, one male and one female, Zhan Cangzhou, a member of the municipal standing committee and Party secretary of the municipal Political and Legal Commission declared that “Xiamen will take good care of Mauritius’s national treasure,” according to a statement on the Xiamen government’s website.

In the photos, a Chinese man, his son, and a girl are seen riding the giant tortoises. The boy and girl hold what appears to be a screwdriver, which they use to prod the tortoises to make them crawl. In another photo, one of the tortoise had tears in its eyes.

The tortoises’ breeder, one Ms. Xue, told Oriental Net that she did allow tourists to snap pictures with the tortoises, since that was in line with the zoo’s regulations. Ms. Xue said she saw tourists mounting the giant tortoises and would caution them against riding them for too long. She has since lost her job at the zoo.

Haicang WIldlife Zoo officials say they have set up an investigation team to probe the news of animal cruelty, and have restated the zoo’s policy that tourists cannot ride tortoises when taking pictures. Officials add that the tortoise’s “tears” in its eyes and nose are “normal” and shows that the reptile is “healthy.”