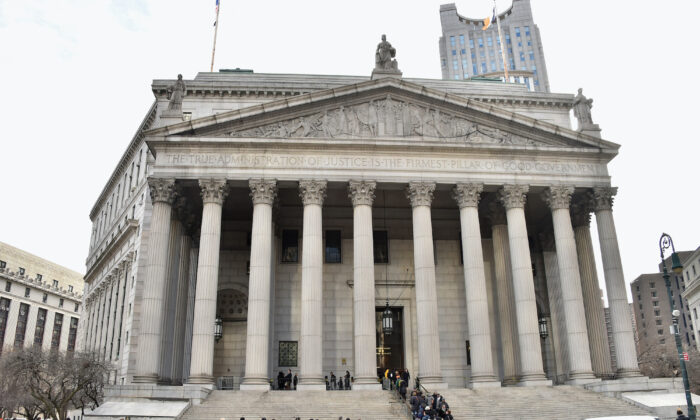 In recent years, more and more Chinese people and China-based companies have filed lawsuits in the civil courts of New York, hoping to get help enforcing the judgments of Chinese courts that have failed to hold debtors accountable.

For instance, Shenzhen’s Yipiao Enterprise Management Consulting Co., Ltd., filed a lawsuit to the civil court in Manhattan, New York, asking it to confirm a 2014 judgment made by the Second Intermediate Court of Shanghai. The legal basis for the transnational filing is the Uniform Foreign Money-Judgments Recognition Act enacted by the U.S Uniform Law Commissioners in 1962, and New York State Civil Enforcement Code CPLR Article 53.

According to court records viewed by The Epoch Times, there have been many such court filings made recently, such as the maritime shipping contract dispute between the White Periwinkle Shipping Company and Chongqing Red Dragonfly Oil Company. The plaintiff, the shipping company, filed the lawsuit in March this year in New York, asking the local judge to recognize and enforce judgments made by Chinese courts.

There is also a stock dispute case: Northeast Securities Co., Ltd. vs. Sichuan Hengkang Co., Ltd. where the plaintiff filed the case with the Manhattan Civil Court in New York on July 7 seeking to recognize and enforce the judgment of China’s Jilin Court involving a debt amount of 500 million yuan ($74.5 million).

But why are plaintiffs filing their lawsuits from China in New York courts to enforce foreign judgments? It’s because in many cases, both the defendants and the subpoena recipients are now living in New York. Many Chinese high-net-worth families have chosen to settle in the megacity—the financial center of the world—after emigrating to the United States. Moreover, almost all major banks and financial institutes have branches in New York, making the city a good place to start asset tracking.

Then why should New York courts recognize foreign judgments? Take the above-mentioned Shenzhen’s Yipiao case as an example. The plaintiff did not seek any additional repayment, or a new judgment, against the defendant from the New York court, but only required the court to recognize a foreign money judgment based on the “summary judgment in lieu of complaint” procedure.

Once the Chinese judgment is converted to a “summary judgment” in New York, the plaintiff can use the state-permitted “Post-judgment Discovery” process to pressure the debtor and compel a third party to comply with the subpoena seeking the debtor’s bank records, financial records, real estate assets, and so on.

However, if the foreign judgment was obtained by fraud, or the cause of action on which the judgment was based is contrary to U.S. public policy, or other scenarios such as the foreign court’s failure to form an impartial tribunal, improper judicial procedures, and court decisions that violate U.S. constitutional principles including freedom of speech in the First Amendment, foreign court judgments cannot be recognized and enforced in the United States.

Therefore, plaintiffs of such cases usually articulate how their foreign judgment meets the legal requirements of the United States. For example, Shenzhen Yipiao affirms that the Chinese court judgment is the final and conclusive judgment and that China’s  civil law system is “a fair system that provides impartial tribunals and is compatible with the requirements of due process of law afforded litigants in the United States.”

So will the New York court fully recognize judgments from Chinese courts? At present, it’s still hard to say. There are currently two cases in New York State that have been adjudicated by courts.

However, Guan and Fang, the two defendants, immediately appealed, citing a number of reasons, including the U.S. State Department’s 2018 Country Reports on Human Rights Practices, which fully demonstrated that China’s legal system did not meet the U.S. due process requirements. The case is still on appeal and has not yet been closed.

In the second case, on April 30, 2021, Queens County Supreme Court refused to recognize and enforce the Beijing High Court’s judgment concerning Shanghai Yongrun Investment Management Co., Ltd. v. Kashi Galaxy Venture Capital Co., Ltd. and an individual surnamed Xu, on the ground that China’s judgment “was rendered under a system which does not provide impartial tribunals or procedures compatible with the requirements of due process of law,” and “substantial problems with the independence of the judiciary,” particularly in politically sensitive cases.

In the preamble to the judgment, Judge Arthur Engoron first quoted Churchill’s famous remark about democracy in his 1947 Veterans Day speech: “Democracy is the worst form of government except for all those other forms that have been tried from time to time.”

“After 30 years in the judicial trenches (12 as a law clerk, 18 as a judge), this Court feels roughly the same about the civil justice system in New York: it is not, by any means, perfect;  but, by and large, it strives to, and in most instances (probably the vast majority of instances) it does, produce results that are fair and just,” Engoron continued.

“The great engine, the open secret, of the American legal system is the requirement that all parties receive ‘due process.’ Legal historians trace the origin of that phrase back to Clause 39 of the Magna Carta: ‘No free man is to be arrested, or imprisoned, or disseised, or outlawed, or exiled, or in any other way ruined, nor will we go against him or send against him, except by the lawful judgment of his peers or by the law of the land.’”

Judge Engoron used seven pages, almost the length of a legal paper, to argue that China’s litigation system as a whole does not meet the requirements of due process of law in the United States.

“Chinese justice looks good on paper, but in practice leaves much to be desired,” Engoron concluded.

However, on March 10, the Supreme Court of the State of New York overturned the first-instance judgment by Queens County Supreme Court, arguing that the U.S. State Department’s 2018 and 2019 Country Human Rights Reports should not be used to assess China’s entire judicial system.

“In any event, the reports, which primarily discuss the lack of judicial independence in proceedings involving politically sensitive matters, do not utterly refute plaintiff’s allegation that the civil law system governing this breach of contract business dispute was fair,” the supreme court ruled.

It remains unknown whether the defendants have appealed to a higher court after the overturn.