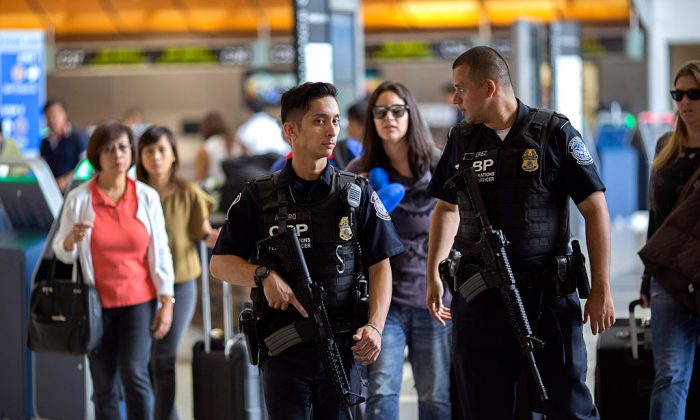 A court in California recently heard the case of two Chinese nationals who attempted to bribe a U.S. customs official when one of them was barred from entering the United States.

The case centered around an incident on May 17 when Pei Qingbin, a resident from Qingdao, a port city in eastern China’s Shandong Province, arrived at Los Angeles International Airport after a flight from his hometown.

While going through customs, Pei was subjected to further review by U.S. Customs and Border Protection (CBP) officials, after a record in the U.S. Department of Homeland Security (DHS) database revealed that Pei and his wife, during a prior visit to the United States, came to the country with the intent of giving birth to their child, but hid the true purpose of their trip from customs officials.

While inspecting Pei, CBP officials found images of an altered CBP stamp—which is used to certify lawful entry into the United States—on Pei’s cellphone, in addition to images of the wife and their child, and the child’s U.S. birth certificate and Social Security documents—evidence that the child was indeed born in the United States.

CBP officials then barred Pei from entering the United States.

While he was detained in the CBP waiting area waiting to board a flight back to China, Pei tried to bribe a CBP official surnamed Tsai, who was assigned to watch him. Pei first offered Tsai $1,000 to release him and allow him to enter the United States. Seeing that Tsai did not take the bait, Pei raised his bribe to $2,000 and then $3,000.

Then, Pei suggested that he could offer $6,000, but would need to call a friend first. Pei then suggested to Tsai that he did not mind returning to China but would like Tsai to wipe clean his immigration record—and offered a bribe of $10,000 for that.

Tsai, acting undercover under the direction of an investigative arm of DHS, took up Pei’s offer of $6,000. To convincingly carry out his undercover assignment, Tsai even told Pei to keep quiet about the bribery, or else Tsai could lose his job.

Pei then tried to ask for Tsai’s personal contact information because, he said, he had other friends that would need Tsai’s “service.”

Pei soon made phone calls to Wang Zulei—who, according to court documents, was a self-proclaimed travel document agent that assists people in obtaining Chinese visas—asking him to immediately deliver the money to the airport. After Wang appeared with the money, Tsai told Wang that he had stamped Pei’s customs declaration form with a CBP stamp. Wang then gave him an envelope filled with about $6,000 in cash.

Caught in the act, Pei and Wang were subsequently detained by nearby DHS agents.

On July 16, the two appeared for a hearing at a federal court for the Central District of California. Afterward, the court placed Pei under custody and Wang was released on bond.

According to the latest court documents, the case will begin a jury trial on Oct. 23.