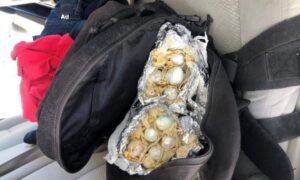 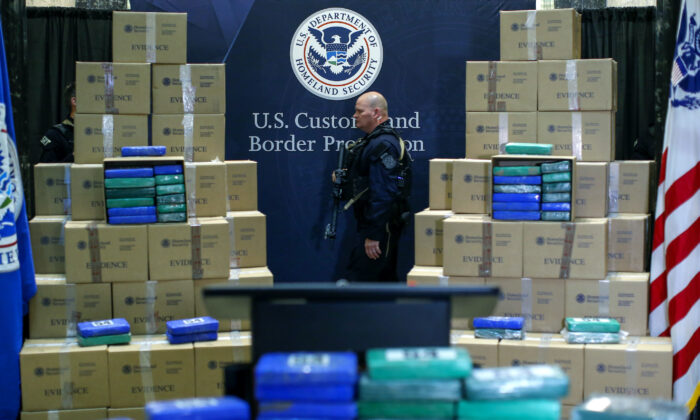 A police officer walks near cocaine seized from a cargo ship at a Philadelphia port during a news conference at the U.S. Custom House in Philadelphia, Pa., on June 21, 2019. (Eduardo Munoz Alvarez/Getty Images)
Chinese Regime

A Chinese national found guilty of a money-laundering scheme to move tens of millions in drug proceeds was sentenced to seven years in prison on Aug. 3, while his Chinese co-conspirator pleaded guilty a day earlier, the U.S. Department of Justice (DOJ) announced.

Li Xizhi, 48, who pleaded guilty to a money laundering charge on Aug. 2, was one of six Chinese nationals charged in 2020 for their involvement in a transnational money-laundering network spanning countries including Belize, China, Guatemala, Mexico, and the United States. According to a statement from the DOJ, Li “played a leadership role” in the network, which included foreign and domestic front companies.

Among the six was Liu Tao, 46, who was sentenced to seven years in prison on Aug. 3. Liu, born in China and a resident of Hong Kong, pleaded guilty in April to charges of money laundering and bribing a U.S. public official.

Li’s network laundered at least $30 million in drug proceeds, mainly from drug-trafficking activities involving cocaine, dating back to around 2008. According to an indictment (pdf), Li, who was born in China but lived mainly in Mexico and Guatemala, built close relationships with drug traffickers and drug-trafficking organizations in countries such as Columbia, Guatemala, and Mexico. He then secured “contracts” to move their drug proceeds and was paid a commission.

To facilitate the laundering of drug proceeds, Li purchased a casino in Guatemala and registered it under the alias “Francisco Ley Tan.” The casino was then used by Li and his co-conspirators in part to hold meetings with drug traffickers.

The money-laundering scheme involved the use of bank accounts—some opened under false identities—in countries including the United States and China. According to the indictment, Li used his alias to obtain bank accounts in Miami. The scheme also involved the use of accounts in China’s state-owned financial institutions, including the Agricultural Bank of China and the Industrial and Commercial Bank of China.

“These [Chinese] accounts were used to receive and transact money derived from drug sales, including the sale of cocaine, in the United States,” the indictment states.

The laundering scheme included the transportation and smuggling of cash in bulk.

One of the six Chinese nationals, ​​Li Jingyuan, 49, of San Gabriel, California, was involved in gathering cash “generated by illegal activities in the United States, including the unlawful sale of drugs,” according to the indictment. He also pleaded guilty in April.

Liu also picked up bulk drug cash, which he then deposited into bank accounts provided by Li Xizhi.

Liu’s bribery charge was connected to his attempt to obtain fraudulent U.S. passports for himself and other individuals. According to the indictment, he bribed an undercover DEA agent for about $10,000. The agent, who posed as a corrupt U.S. State Department official, told Liu that U.S. passports could be bought for $150,000 each.

Liu agreed to that amount and transferred about $10,000, including $5,000 in cryptocurrency, as a down payment to buy a passport for himself.

“The defendants laundered millions of dollars on behalf of drug traffickers through the global financial system in a manner that concealed the source and nature of the illicit funds,” said Assistant Attorney General Kenneth A. Polite Jr. of the DOJ’s Criminal Division in the statement.

Li and his co-conspirators used encrypted platforms such as WhatsApp and China’s WeChat to “discuss their illegal activities,” the indictment states.

According to the DOJ, co-conspirator Chen Jiayu, 46, of Brooklyn, New York, was sentenced to 60 months in prison over money laundering on July 20. Chen was also ordered to forfeit $2.8 million.

Another co-conspirator, Eric Yong Woo of Alhambra, California, is scheduled to be sentenced on Sept. 21, according to the DOJ. The last co-conspirator, Chen Jianxing, who lives in Belize, is waiting to be extradited to the United States following his arrest in Peru.