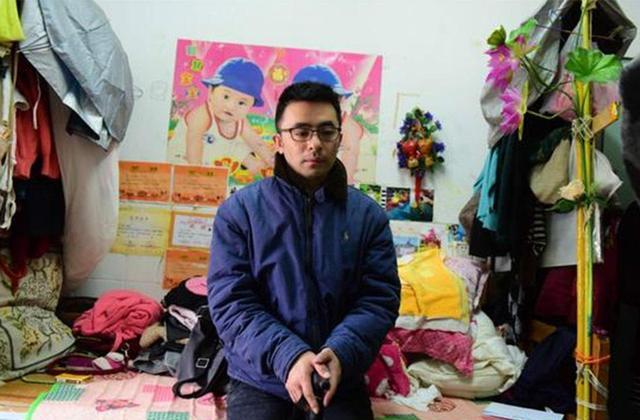 Mr. Chu in his apartment. (via Shenzhen Evening News)
China

On March 22, when Mr. Chu’s mother closed the door to the balcony while receiving a call from her second daughter, the elderly woman was talking and laughing as usual. Nothing seemed amiss until the conversation was over.

But when Chu looked for his mother, surnamed Lin, to ask her for instructions on a recipe, she was nowhere to be found, Shenzhen Evening News reported on March 26.

Only when Chu, who resides in Shenzhen of southern China, heard a thumping sound and opened the door to the balcony did he look down to see that his mother had jumped off and killed herself, he told local television reporters.

The space between apartment blocks was only about one meter wide; the thumping sound was made by Lin’s body colliding with the walls and windows on her way down.

Lin, 63, was a native of northeast China. For ten years, her son has suffered from a chronic spinal disorder that took a turn for the worst last October, but her family is too poor to afford effective treatment. Lin had committed suicide so that Chu might collect on her life insurance and pay his medical bill.

But her plan was futile, because her insurance term had expired last year.

Chu’s family of four was supported entirely by his wife, whose monthly wage was 3,000 yuan (about $450). To treat his ankylosing spondylitis, he would have had to foot a staggering 300,000 yuan. Meanwhile, his mother’s insurance, were it still active, may have been able to compensate them with 200,000 yuan.

Lin had tried to find work to help her daughter-in-law support the family, but no employer would take her on account of her advanced age. Last year she discovered  that she had life insurance that could cover her in the event of severe disease or death, but did not check its date of expiry—Nov. 27, 2015.

Before dying, Lin had brought her children two bags of dumplings—a taxing procurement given their economic hardship—and emptied the entirety of her bank account to give her son.

“I am too tired,” she wrote in a suicide note. “I am so sad that I can’t help you. Put your heart at ease, I will definitely raise the money for you.”

After sending a final text message to her daughter and answering her call, Lin opened the door to her balcony.