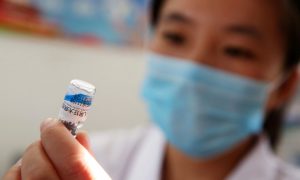 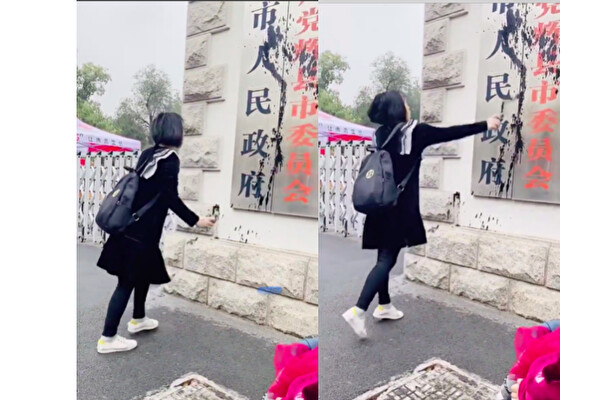 On the afternoon of Oct. 2, He Fangmei, mother of a child who was injected with a faulty vaccine, splashed ink on the door plates of her local county government to express frustration at the authorities’ refusal to hold the vaccine manufacturers accountable.

He is from Hui county, Henan Province. She was arrested by local police on suspicion of “picking quarrels and provoking trouble,” and was sentenced to administrative detention for 10 days. But, it was not enforced due to her pregnancy.

In the past decade, several pharmaceutical companies in China—and local authorities that turn a blind eye—have come under fire for administering defective vaccines on children, causing permanent health defects.

The parents of the disabled children have been petitioning government authorities to hold the manufacturers accountable and help the children get treatment and compensation. However, the parents’ concerns have been suppressed as authorities sought to stifle dissent.

In 2018, He Fangmei’s daughter took a Bio-Buper vaccine made by the Wuhan Institute of Biological Products, which caused her to be permanently disabled. In her journey to seek justice for her daughter, He Fangmei has been followed and watched by police, arrested, and imprisoned by local authorities.

Now five months pregnant with her second child, Fangmei posted a video of herself protesting on Twitter. Local police stood watch at her door 24 hours after she was released from jail and stopped her from taking her daughter to Beijing for medical treatment, she said. “Is there any value for such a government to exist?” she questioned in the video.

He Fangmei later told The Epoch Times in an interview that immediately after splashing ink, there were three uniformed police officers and one plainclothes police following her. A policeman named Zhao Zhanli came over and snatched He Fangmei’s protesting banner from her hands. He also threatened that she “is suspected of insulting the government’s door,” and demanded, “you come with me to the police station now,” according to He.

He Fangmei’s ink-splashing video on Twitter has attracted the attention and support of many netizens. Some netizens said, “It’s too much to stop people from seeking medical treatment.”

“Well done! The government doesn’t do anything. It will shirk responsibility if something happens,” another wrote.

Netizens have also expressed their concerns about her safety. One hour after the interview, The Epoch Times contacted her again, but no one answered the phone.

Public welfare activist Yang Zhanqing later posted two pictures of official notices on Twitter, showing that He Fangmei had been arrested and detained by the Huixian city police for “picking and provoking troubles.”

On the eve of China’s “National Day,” the anniversary of the Communist Party’s takeover of the country, parents of vaccine victims protested in front of the Beijing Health Commission office and shouted slogans.

Yang stated that it is now very difficult for the parents to enter Beijing and petition authorities. They also risk being arrested. Every word the parents shout in Beijing is at the cost of their freedom, Zhang said.

Wang Jing contributed to this report.