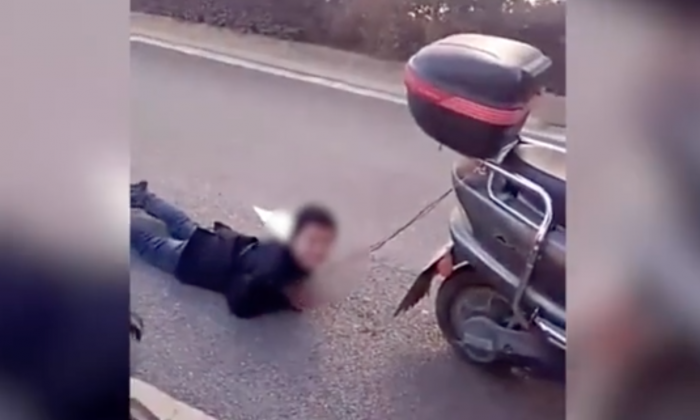 A mother in China's Yunnan Province allegedly tied her son up by the hands and dragged him behind her scooter as a punishment. (火龙果传媒工作室/Youku)
Asia & Pacific

In a video uploaded to Chinese social media, a woman appears to be dragging her son behind her on a scooter, which she says is punishment for bad behavior.

In footage captured of the cruel treatment, the mother sits on the scooter while her son, whose hands are bound in front of him, is dragged behind her on the ground, attached to the scooter by a rope tied to his hands.

The woman, who claims to be the boy’s mother, says in the video that her son had been naughty and she was teaching him a lesson.

A female voice in the video comments that not even a stepmother would do something so cruel to a child, let alone a real mother.

The woman said the mother had been doing this for several days already.

A narrator in the video says that the boy cried as the mother dragged him over the pavement, and that a bystander tried to stop the vehicle but got told off by the mother.

The narrator says the video was shot in Zhaotang, in China’s Yunnan Province.

Ludian Police released a statement saying that on Jan. 16, someone reported 2,000 yuan ($311 USD)  missing from their residence, according to a report in the Beijing News. Police said a 10-year-old boy confessed to taking the money.

According to the police report, the mother said she had tried to get the boy to understand what he did wrong, but when he didn’t learn from his mistake, she escalated the punishment.

On Wednesday, Jan. 17, the mother used ropes to tie the boy hands to motorcycle and drag him behind it, the Beijing News reported.

After an investigation, the Ludian Police said the mother realized she should not educate her child that way. They also reported the boy was unharmed.

This isn’t the first time something like this has happened in Zhaotong.

Last July, a father tied a boy who he said was his son to the back of his motorcycle then dragged him naked through the streets of the city, the South China Morning Post reports.

The boy’s crime? Reportedly stealing 100 yuan ($15 USD), spending the previous night playing outside, and failing to go to school.