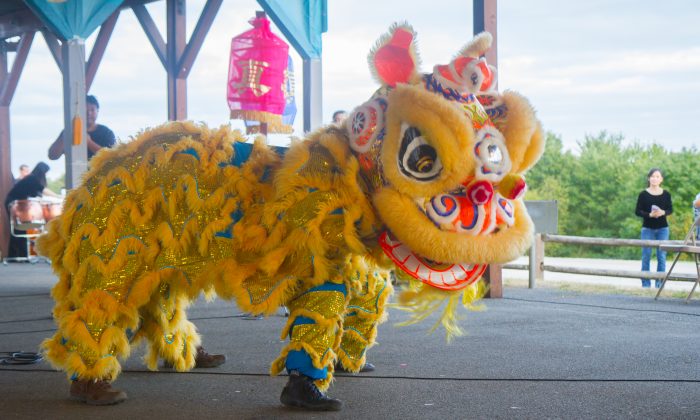 OTISVILLE—Hanfu clothing, dumplings, moon cake, and performances with traditional Chinese instruments like the erhu, a two-stringed violin, were just a few of the Chinese cultural experiences on display at the Moon Festival at Mount Hope Town Park in Otisville Sept. 17.

Guests were greeted by two heavenly maidens in flowing, pink, traditional Chinese dresses, while inside were rows of vendors selling everything from Chinese noodles to tea to clothing and acupuncture.

The Moon Festival, also called the Mid-Autumn festival, is one of the major holidays in Chinese culture. It falls on the 15th day of the 8th month in the Chinese lunar calendar, which was Sept. 15 in the Gregorian calendar this year. It celebrates the autumn harvest, and the full moon signifies completion, according to the organizers, a group of neighbors, both western and Chinese, who wanted to share the traditional Chinese holiday with the community.

“Our Chinese culture has 5,000 years of history and there’s a lot of good things that we would like to introduce to the public,” said Feng Ching, one of the organizers.

There has been a rise in the number of ethnic Chinese living in the Mount Hope-Deerpark area in the last 15 years or so, and this, they said, was a way to introduce their neighbors to the best of the culture.

“Chinese culture is so profound, you cannot include all of it in a few-hours activity, but I think that little by little, if we have more events, eventually people will understand Chinese culture more,” Ching said.

It was certainly an introduction for Nicholas Wyman of Glen Spey, whose previous experience with Chinese culture was eating at Chinese restaurants.

For Sasha Ramos, who used to live in New York City and now has a home in Middletown, this wasn’t her first exposure to Chinese celebrations, but it was her first Moon Festival.

What stood out for her was the orchestra from Fei Tian Academy, a bilingual performing arts school based in Deerpark, which has a mix of western and traditional Chinese instruments.

“The music is really special,” she said. “There’s just something so soothing [about it].”

The organizers, who hosted a Chinese New Year’s festival in February and had so many people in the Huguenot Firehouse they were almost over capacity, made sure they had a bigger venue this time. They estimate between 800 and 1,000 people showed up.

Although the festival was a celebration of the golden, harvest moon, the elusive satellite peeped out from from the clouds only after many had left.

Otherwise the festival went well, organizers said, and Mount Hope Town Supervisor Chad Volpe said he hoped they would do it again next year.

“[It was the] first annual and I think it was absolutely awesome,” he said. “The turnout was great, people seemed to have a great time, and hopefully we’ll be hosting it again next year.”