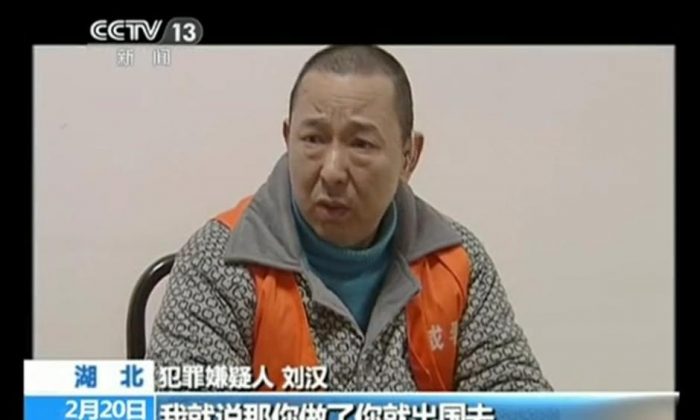 In this screenshot from a Chinese Central Television interview, Liu Han, former Chinese mining tycoon, is shown in prison garb. Liu was executed on Feb. 9, 2015 for committing multiple crimes including murder and gun-running. (Epoch Times)
China

Chinese millionaire Liu Han, his brother and three associates were executed on Feb. 9 for a series of charges, including murder and organized crime, according to state media reports. Liu reportedly had close ties to Zhou Bin, son of former security czar Zhou Yongkang.

48 year-old Liu was convicted of 13 crimes including the murders of at least eight people and gun-running. Liu was given the death penalty on May 23, 2014. Although Liu and four associates denied the charges, the court upheld the conviction and the sentence was carried out.

Liu was a mining tycoon who headed the Hanlong Group, the largest private enterprise in southwestern Sichuan Province. It was engaged in mineral extraction, energy, finance, and real estate.

According to mainland Chinese finance magazine Caixin, Liu was reported to have had business ties with Zhou Bin, son of disgraced former security chief Zhou Yongkang. A former politburo member, he was placed under state investigation for corruption last December for “severe violations of party and organizational discipline.”

However, during Liu’s trial, his ties to the Zhou family were not mentioned.