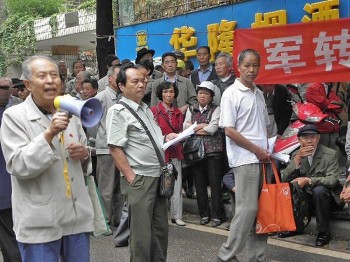 Chinese military veterans are using the anniversary of the founding of the Chinese Communist Party (CCP), July 1, to express dissatisfaction with their current benefits and status. They brought petitions seeking resolution of these issues to Party offices in Beijing, Jiangsu and Yunnan, yet in Sichuan the veterans were dispersed violently.

On the morning of June 29, about 100 retired military officers petitioned in front of the Sichuan provincial government. They asked for a dialogue with the relevant officials, but instead, several hundred policemen began to beat them. Six of them, including Mr. Liu Mingjun, were injured and forcibly taken to the police station for interrogation.

The grievances the vets presented concern inadequate medical insurance, pensions, and living and housing allowances. The veterans also asserted that they are entitled to retirement benefits commensurate with other government employees and that their status should be upgraded to cadres.

After Liu was injured, he was detained in the police station, and was not allowed to eat or seek medical attention. "A couple of them beat me up and pushed me into a car. My whole body was wounded, including my head. They pressed me on the ground to hit and kick me. They are really very vicious. I have suffered from low blood sugar, and I still feel dizzy and have ringing in my ears," he said.

A retired military officer surnamed Lan said that in recent years, many retired military officers have separated from their wives and children, and have been forced to lead a miserable life. The average divorce rate reached 40 percent. Since many of them could not afford medication, some have died while employed over the last year, while others have suffered from various illnesses.

Another similar event occurred in Kunming, Yunnan on June 28. Over 2,000 veterans marched in military cadence to the CCP’s provincial office, seeking clarification on their lack of cadre status and the accompanying low wages. They believe that the Party personnel bureau has illegally categorized them as workers instead of cadres. No officials came out to meet the vets and a large number of police were present.

In Beijing, more than 10,000 people made appeals at the petitions offices of the State Council and the National People’s Congress on June 27 despite efforts by police to keep them away, according to an earlier Epoch Times report.

Among the petitioners were about 100 retired military officers and soldiers who fought in the “Self Defense War” against Vietnam in 1979. They formed a squadron and shouted slogans, including, “Knock down the Chinese Communist Party!”