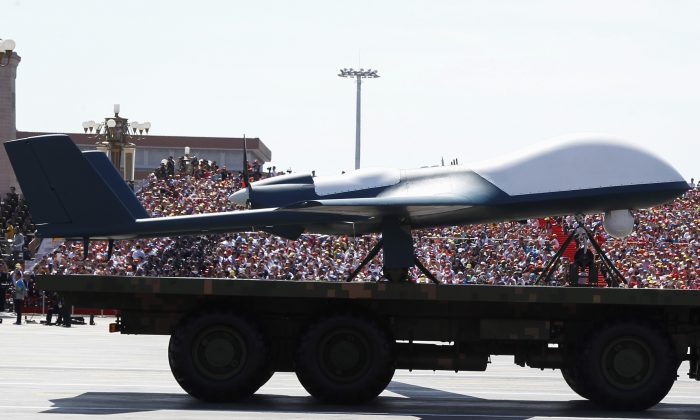 A Chinese military drone is presented during a military parade on Tiananmen Square in Beijing on Sept. 3, 2015. (Rolex Dela Pena/AFP/Getty Images)
Thinking About China

The Chinese military is unveiling a range of sophisticated military technologies, from underwater stealth explosives to use against foreign ports to drone fighters and military artificial intelligence (AI).

China’s military is testing stealthy underwater explosives for the purpose of destroying foreign ports, according to Global Times, an ultra-nationalist media outlet controlled by the Chinese Communist Party (CCP).

“If we can use stealthy ways, like underwater explosions to destroy the ports, we can kill off the enemy’s war potential,” Capt. Zhao Pengduo, the deputy director of the Naval Port Demolition Test Program, told a China Central Television (CCTV) program.

Just in case the West missed it, Global Times translated the comments and published them on Oct. 25. The testing and its publication—in English—could be an attempt to prove the credibility of China’s naval threat to the United States as tensions rise over Taiwan, the South China Sea, and Japan’s Senkaku Islands, all of which Beijing claims as its territory. The CCP thus has revealed that its intentions aren’t honorable.

Scientific sensors were placed on the small wharf prior to its destruction as part of the test. Chinese state media reported that “as the explosion took place, nearly 1,000 pieces of data were gathered, which were then analyzed to accurately evaluate how the wharf was damaged … noting that this will provide scientific support to attack hostile ports in a real war.”

“This tactic can play a significant role in many combat scenarios, including countering the U.S. naval warfare aimed at China,” a Beijing military expert told Global Times.

“Since the U.S. now understands its large vessels like aircraft carriers and large military facilities near China are vulnerable to attacks, it is scattering its forces to … smaller locations.”

The expert claimed that the scattering of the U.S. Navy would make logistics, command, and communications more difficult, presumably forcing U.S. ships to rely on numerous regional ports that are vulnerable to China’s stealthy underwater explosions. Beijing’s apparent military strategy is to force the failure of port-based logistics chains upon which the U.S. and allied navies rely.

Stealthy underwater explosions could be facilitated by AI-enabled drones. Just as concerning is a new report from Georgetown University that claims that the Chinese military could be spending more on AI than the United States.

AI will be critical to the future of air combat as well. Simulations over the past couple of years have shown that AI-enabled fighter jets often out-compete their human-only counterparts.

The South China Morning Post (SCMP) reported on Oct. 29 that China’s air force could test the world’s first two-seat stealth fighter within the next two weeks. One of the pilots would operate the plane, a variation of the J-20 Weilong Mighty Dragon, while the other would operate the AI-enabled “loyal wingman” drones that accompany the J-20 into battle.

“Experts said the variant showed China had beaten the U.S. and other competitors,” according to SCMP, which is owned by China’s Alibaba Group. Development of the J-20 variant “was an attempt to prove that the US concept of next-generation air dominance (NGAD) could be successfully applied in Chinese aircraft technology,” the report reads.

Prior news of China’s hypersonic missile development and the installation of hundreds of intercontinental ballistic missile silos in the Xinjiang region add to more recent concerns of underwater explosion tests, AI progress, and stealth fighter jet development to paint a dim picture of the CCP’s intentions and willingness to execute goals, such as the invasion of Taiwan.

U.S. lawmakers and regulators have recently responded to Beijing’s increasingly threatening behavior, including through the essential disruption of China’s theft of U.S. intellectual property that fuels the Chinese military-industrial complex. One effective way to approach this issue is by clamping down on some of China’s most important technology companies.

On Oct. 26, the Federal Communications Commission (FCC) appealed to national security considerations in the revocation of a China telecom subsidiary’s authorization to operate in the United States.

The Senate voted unanimously on Oct. 28 for legislation that prevents U.S. regulators from granting new equipment licenses to five companies designated on the FCC’s “Covered Equipment or Services List.” The companies include Huawei, ZTE, Hytera, Hikvision, and Zhejiang Dahua, all of which are considered to be security threats.

By a vote of 420–4, the House had previously approved the law. The majority is veto-proof in both congressional chambers, so President Joe Biden will likely sign the measure into law shortly.

But restrictions on Beijing’s ability to steal U.S. technology are entirely inadequate to date. The Georgetown study found that the U.S. Commerce Department only restricts 22 of the 273 firms that supply the Chinese military.

“Almost none are subject to financial sanctions,” Fedasiuk wrote on Twitter.

The United States must get much more serious about defeating Beijing’s plans to steal U.S. technology and use it to build the CCP’s economic and military strength against democracy and human rights on a global scale. More subsidies of U.S. technology, before stopping the technology leakage problem, could only make it worse.

The $250 billion U.S. Innovation and Competition Act is currently held up in the House. It includes massive technology subsidies geared for competition with China and should be revised to ensure that the CCP doesn’t thereby benefit more than America.