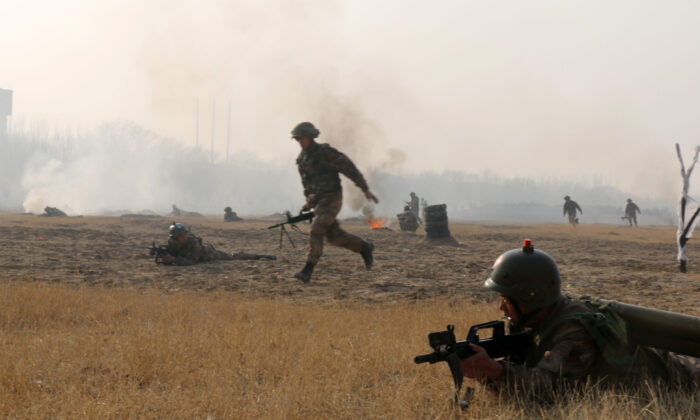 Army officers and soldiers in action during a drill on Jan. 3, 2017 in Yinchuan, Ningxia Hui region of China. (Getty Images)
Military

The Chinese regime’s military said on Oct. 11 that it carried out military drills including simulated beach landings and assaults in Fujian Province, which lies just west of Taiwan across the Taiwan Strait.

Self-ruled Taiwan has criticized Beijing’s escalated military harassment in recent weeks, which included a record show of force from the regime’s air force over the island’s air defense zone.

Also included was a video of Chinese soldiers from the 73rd Group Army storming a beach aboard single-engine dinghies, cutting through barbed wire, and digging trenches.

The 73rd Army Group is a corps-sized unit that’s predominantly motorized infantry with armor, artillery, air-defense, missile, and engineer elements. The unit has engaged in similar drills throughout the year and is believed to be China’s primary invasion force in its plans for a war with Taiwan.

The drills come at a time of heightened tensions regarding the possibility of a major war over Taiwan, which the Chinese Communist Party (CCP) claims to be part of its territory.

Over the weekend, CCP leader Xi Jinping also reiterated a vow that Taiwan would be “reunified” with the mainland, and blamed continued commitment to Taiwan’s independence as a major threat to his plan of so-called “national rejuvenation,” a goal that observers say indicate Xi’s desire to transform the regime into the world’s sole superpower by mid-century.

“Taiwan independence separatism is the biggest obstacle to achieving the reunification of the motherland, and the most serious hidden danger to national rejuvenation,” Xi said.

The comments followed a record number of incursions by the Chinese military into Taiwan’s air defense zone, as some 150 PLA aircraft have entered the area since the beginning of this month.

The intrusions drew a promise from Taiwan President Tsai Ing-wen that the island would do “whatever it takes” to defend its continued independence and democratic way of life from CCP totalitarianism.

The PLA didn’t overtly link its drills in Fujian to the ongoing escalation of tensions with Taiwan. The province would, however, likely play a central role in any PLA invasion of Taiwan because of its geographic proximity to the island and significant number of active PLA elements.

Fujian is only about 80 miles from Taiwan at the narrowest part of the Taiwan Strait, and is part of the greater Nanjing Military Region that is home to three active army groups, totaling 100,000 to 300,000 troops.