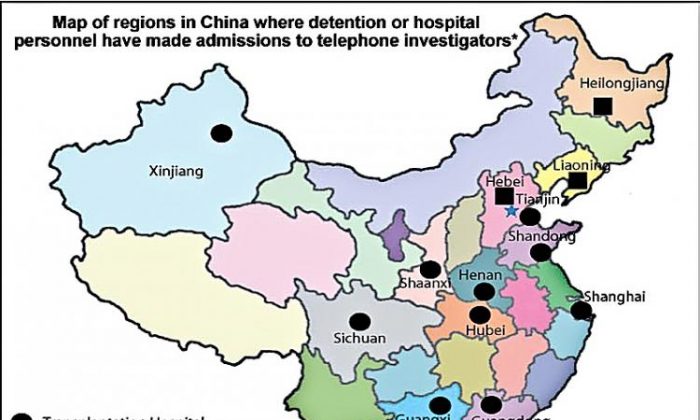 An investigative report detailing Chinese military hospitals’ involvement in forced organ harvesting has been finalized by the World Organization to Investigate the Persecution of Falun Gong (WOIPFG), a U.S.-based non-profit organization.

First drafted April 28, 2008, the report outlines evidence compiled over the past three years. It concludes that China’s military hospitals have harvested organs from Falun Gong practitioners detained in jails, labor camps and others facilities, to support China’s lucrative organ transplant business. The report says the organs are sold to patients from China and aboard.

Among the evidence compiled in the report are statistics previously published on Chinese hospital websites, recorded conversations with hospital staff, and eye witnesses’ accounts. More than 30 military hospitals and armed police hospitals from all over China were named in the report.

WOIPFG cited another investigative report, put together by Canadian MP and former Secretary of State David Kilgour and Canadian human rights attorney David Matas, which highlighted the abundance of organ sources. An Asian patient, Mr. H.X., told the two investigators about his two transplant trips to Shanghai. On his first trip in September 2003, four kidneys freshly taken from the suppliers’ bodies were transported to his hospital for cross-match testing during his two-week stay, and all four failed the test. On his second trip in March 2004, four more kidneys were tested to finally find a match. The Fuzhou General Hospital’s Dr. Tan Jianming was in charge of the operation.

“Mr. H.X.’s wife saw around 20 sheets of papers with relevant info of organ suppliers and their HLA info,” the Kilgour-Matas report says. “The doctor [Tan] picked a few from the list and put them in order … The residents [doctors] told Mr. H.X. that the organ came from an unwilling executed prisoner.”

Wait times for matching organs are typically very short in these hospitals, according to the WOIPFG report. Shanghai Changzheng Hospital, one of the largest and most well-known in China, is affiliated with the Second Military Medical University. The hospital’s website previously said the average wait time for a liver transplant is one week, but the statement has since been removed from the website.

The WOIPFG report also listed quotes from many other military hospital websites, which boasted large numbers of organ transplants. Before 1999 the number of organ transplants was close to nil, and rose steeply after the persecution of Falun Gong started.

In a statement, WOIPFG called for the “international community’s immediate action to thoroughly investigate and terminate the Chinese Communist Party’s genocidal persecution against Falun Gong practitioners.”