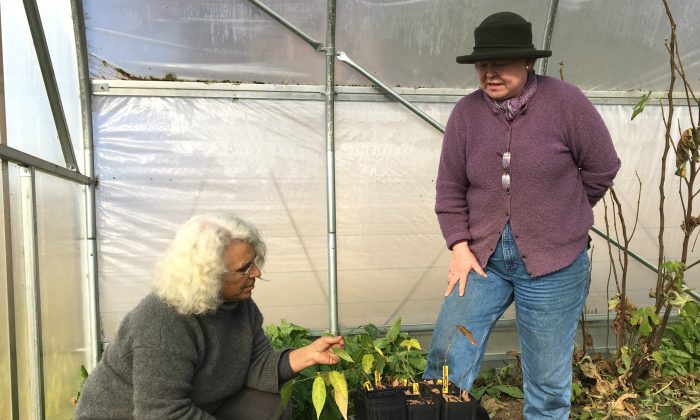 Rebekah Rice (L) and Jean Giblette examine seedlings of trees used in Chinese herbal medicine, after Giblette brought them to Rices greenhouse for the winter in Delmar, N.Y., on Dec. 7, 2015. (AP Photo/Mary Esch)
US

DELMAR, N.Y.—Expanding interest in traditional Chinese medicine in the United States is fostering a potentially lucrative new niche market for farmers who plant the varieties of herbs, flowers, and trees sought by practitioners.

While almost all practitioners still rely on imports from China, dwindling wild stands there, as well as quality and safety concerns, could drive up demand for herbs grown in the United States. Several states have set up “growing groups” to help farmers establish trial stands of the most popular plants.

“As a farmer, I love the idea of growing something no one else is growing, something that’s good for people,” said Rebekah Rice of Delmar, near Albany, who is among 30 members of a New York growing group. “This project is seriously fascinating.”

Jean Giblette, a researcher who has established New York’s group, said it could also be a moneymaker. She estimates the market for domestically grown medicinal plants to be $200 million to $300 million a year.

Traditional Chinese medicine is gaining mainstream acceptance in the United States. There are 30,000 licensed practitioners across the country—46 states issue licenses, often requiring a master’s degree and continuing education credits. In 2014, the Cleveland Clinic opened one of the first hospital-based Chinese herbal therapy clinics in the country.

If growers in the U.S. can produce a highest-quality product that is identical to species from China, without contamination from heavy metals or pesticides, I think it’s a great opportunity for farmers.
— Jamie Starkey, Chinese medicine practitioner

Jamie Starkey, a licensed practitioner of acupuncture and traditional Chinese medicine at the Cleveland Clinic’s Center for Integrative Medicine, said quality, authenticity, and purity are important concerns with herbal products.

“If growers in the U.S. can produce a highest-quality product that is identical to species from China, without contamination from heavy metals or pesticides, I think it’s a great opportunity for farmers,” Starkey said.

More than 300 plants are commonly used in traditional Chinese medicine. Giblette and Peg Schafer, an herb grower in Petaluma, California, compiled a list of marketable species for U.S. farmers. They include Angelica dahurica, a flowering perennial whose root is used to relieve pain and inflammation; Aster tataricus, a relative of garden asters said to have anti-bacterial properties; Mentha haplocalyx, a mint used for stomach ailments; and Salvia miltiorrhiza, a type of sage whose roots are used for treatment of cardiovascular diseases.

The National Institutes of Health says traditional Chinese medical techniques—which included practices such as acupuncture and Tai Chi—are primarily used as a complement to mainstream medicine. The agency cautions that some medicinal herbs can have serious side effects, and there isn’t enough rigorous scientific evidence to know whether traditional Chinese medicine works for the conditions it treats. Clinical trials are difficult because treatments involve combinations of plants customized for each patient.

Giblette, who started High Falls Foundation in New York’s Hudson Valley in 2008 to foster research and conservation of medicinal plants, said growing under conditions similar to a plant’s natural habitat is one of the keys to producing high-quality medicinal plants. The foundation will provide the plants so it can ensure the authenticity of species and market products only to licensed herbal practitioners.

The current herbs from China are not of the quality they once were, and U.S. practitioners indicate they are willing to pay a premium price for herbs grown with organic principles, locally, with high efficacy.
— Rob Glenn, chairman, Blue Ridge Center for Chinese Medicine

“The current herbs from China are not of the quality they once were, and U.S. practitioners indicate they are willing to pay a premium price for herbs grown with organic principles, locally, with high efficacy,” he said.

Using an economic development grant from the Tobacco Region Revitalization Commission, the Blue Ridge Center is enlisting local farmers to grow medicinal herbs that the center will process and sell to licensed practitioners. This year, the center planted 38 species on 35 farms.

The center sent samples from the first harvest to 26 practitioners who agreed to evaluate the quality and efficacy.

“We were super impressed by the samples we received,” said Ken Morehead, a practitioner at Oriental Health Solutions in Durham, North Carolina. “We really want to have access to clean organic herbs. I think the farmers can do well, and we can have an industry that supports the local economy, is good for the environment, and improves people’s health.”

From an economic standpoint, Glenn said the goal is to introduce a crop that could supplement a farmer’s income by as much as $15,000 a year—effectively doubling the income of farmers in the economically distressed area.

To reach that goal, a farmer would have to devote an acre to the project for eight years, Glenn said. Because some of the plants are trees or perennials that take years to grow to marketable size, it will take time to achieve maximum return on investment, he said.

The center’s initial research indicates a return-on-investment ranging from $1.69 per plant for Celosia, an annual flowering plant used for various eye maladies and bleeding, to $20 for Angelica.

“As we continue our experimentation, we will endeavor to have our farmers plant more of the high-value and high-demand plants,” Glenn said.