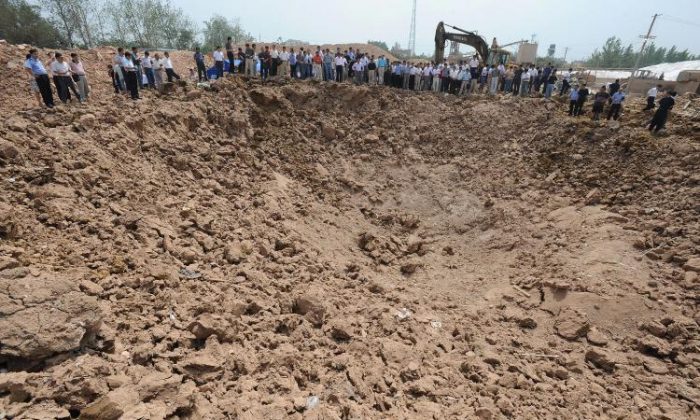 In this file photo, Chinese gather around a crater of what used to be the Jingxin Mining company which produced and processed quartz sand in Fengyang, in China's Anhui province. China is the world's largest producer of rare earth minerals. (AFP/AFP/Getty Images)
World

Turkey has disclosed that it has found a huge rare earth reserve of an estimated 694 million tons in the central Anatolia region.

It is understood to be the world’s second-largest raw earth reserve, with the biggest being an 800 million ton site in China.

According to Turkish media Turkiye, the rare earth deposit was discovered in the Beylikova district of Eskişehir.

Metin Çekiç, a member of the board of directors of the Istanbul Mineral Exporters’ Association (IMIB), said that Turkey has now found enough rare earth reserves to meet the world’s demand for 1,000 years.

The report also said that of the 17 rare earth elements known in the world, 10 are contained in the newly discovered reserve.

Rare earth elements have excellent optical and electromagnetic properties and can be used to form new materials, most notably to improve the quality and performance of other products, hence why they are nicknamed “industrial vitamins.”

Since the end of the last century when China used a lower-price strategy to outcompete MountainPass, the world’s then biggest source of rare earth, the Chinese Communist Party (CCP) has taken control of the global rare earth industry, supplying more than 90 percent of the world’s rare earth at one point. Although the supply rate fell to nearly 60 percent in 2020 it is still dominant.

China currently ranks first in the world in terms of both reserves and production. According to the United States Geological Survey (USGS), the world’s rare earth reserves were approximately 120 million tonnes in 2020, of which China had 44 million tonnes (37 percent).

However, there is no detailed resource description for the new reserve in Turkey, so it is unclear how much of the nearly 700 million tonnes of ore reserves are mineable rare earth ore.

Following the announcement of the new rare earth discovery in Turkey, CCP-controlled media such as NetEase, Sohu, and Global Times reacted cynically to the news.

In addition, China’s retaliation against Japan by halting the supply of rare earth in 2010 caused widespread concern in the international community about China’s control of rare earth supply, and countries began to build a reliable supply chain.

According to the USGS database, significant rare earth resources have been discovered in Greenland, Brazil, Canada, Vietnam, Myanmar, Laos, Norway, and several African countries since 2009. From 2010 to 2020, 261 companies in 37 countries outside of China initiated a total of 429 rare earth projects, adding between 80,000 and 100,000 tonnes of rare earth production capacity.

But according to the Global Times, China is currently the only country in the world with a complete chain of rare earth production, and this processing advantage will not be undermined by the discovery of other rare earth.

Yet, noted in a survey published in March 2021 by China’s Acta Geoscientica Sinica, China is not the only global source of rare earth smelting and separation products. The United States has now built a supply chain consisting of the Mountain Pass mine, the Mount Weld mine in Australia, and its plant in Kuantan, Malaysia, which produces nearly 60,000 tonnes of rare earth ore and 20,000 tonnes of fractionated products per year, creating an initial supply chain of rare earth resources independent of China.