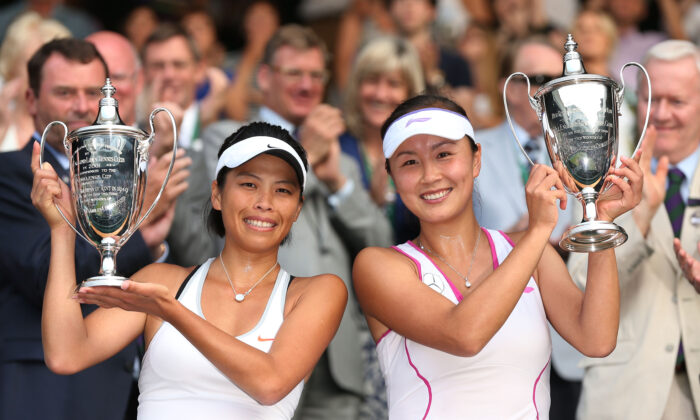 Shuai Peng (right) of China and Hsieh Su-wei (left) of Taipei smile as they pose with the Ladies' Doubles trophies on Day 12 of the Wimbledon Lawn Tennis Championships at the All England Lawn Tennis and Croquet Club in London, England, on July 6, 2013. (Clive Brunskill/Getty Images)
Thinking About China

The disappearance of Chinese tennis player Peng Shuai has triggered international concern over her whereabouts and safety. Calls for investigation over Peng’s sexual assault allegation against a retired Chinese official has been met by a delayed response from Beijing, which is questionable.

Peng, a 35-year-old Grand Slam doubles champion, accused Zhang Gaoli of sexual assault before she became his mistress. Zhang, 75, served as the vice premier of China from 2013 to 2018.

Peng posted the allegation on a Chinese social media platform on Nov. 2, and since then, she has not been seen in public. When the topic was no longer hot on the internet, her colleagues began to speak out.

The WTA called for an investigation into Peng’s allegation. ATP Chairman Andrea Gaudenzi said on Nov. 15 that the tennis authorities have been “deeply concerned” by “the immediate safety and whereabouts” of Peng.

On Nov. 17, state-run media China Global Television Network (CGTN) posted an email on its Twitter account, claiming that it was authored by Peng and addressed to WTA Chair Steve Simon. Peng allegedly refuted her claims of sexual assault.

The email, tweeted by CGTN, begins with, “Hello everyone this is Peng Shuai.” Then it goes on to say that the sexual assault allegation “is not true” and “I am not missing, nor am I unsafe.”

However, netizens soon discovered that there was something fishy about the email. They suspected that the so-called email was a screenshot of a document being edited, as there was a cursor on it, which only appears when editing text. Furthermore, the so-called email tweeted by CGTN has no sender, recipient, or address. Where did CGTN get this email? Definitely not from the recipient Steve Simon because the email appears to be at the writing or editing stage, and it has not been sent out.

In response to CGTN, Simon wrote in a statement: “The statement released today by Chinese state media concerning Peng Shuai only raises my concerns as to her safety and whereabouts. I have a hard time believing that Peng Shuai actually wrote the email we received or believes what is being attributed to her.”

Moreover, the writing style is different in this email, compared to Peng’s first blog post—perhaps they were not written by the same person.

These red flags indicate that the email may have been fabricated, most likely on a computer owned by CGTN, or CGTN was directly involved in the fabrication process. It’s not surprising that the email is fake, but why is the forgery so careless?

First, it reflects the arrogance of power. The Chinese Communist Party’s (CCP) mouthpiece lies all the time in domestic propaganda, with the help of internet censorship. Thus, it doesn’t care whether the viewers believe the content or not. The propaganda is exported abroad, but authorities forget that people outside China can challenge the contents freely.

Was there any indication of the CCP’s high-level power struggle behind Peng’s post? Some people think that it is impossible for the post to have remained on the internet for about 20 minutes, given the strict censorship controls. Thus, there must have been someone who intentionally allowed the post to stay there for a while so that it could serve as a warning to certain individuals or government departments.

Some people believe the post was written by Peng because the message felt authentic. But it is not clear if someone had edited it.

I believe the post is authentic. I think the circumstance surrounding the incident was not complex when the post was released. However, once it was released, some CCP officials might have wanted to use it for political purposes. This does not necessarily have to do with Peng’s motives.

The internal power struggles doesn’t change the nature of the CCP. No matter who loses or wins, the CCP will still do evil deeds. But the CCP’s power struggle has its own purposes.

Power Struggle Within the CCP

The CCP habitually works behind the scenes. Power struggles can sometimes open a window so that the outside world can have a rare opportunity to catch a glimpse of the CCP’s secrets.

For example, the CCP’s political turmoil in 2012 began when Wang Lijun, a police chief and deputy mayor of Chongqing city, fled to the U.S. Consulate in Chengdu, the capital city of Sichuan Province, dressed as a woman and carrying top secret government documents. This incident revealed the power struggle among the CCP’s top officials. The purging of high-ranking officials in the following years, under Xi Jinping, exposed many scandals and secrets of the CCP.

Another outcome of the power struggle is the CCP punishing its own members who have committed a lot of atrocities. For example, under Xi’s anti-corruption campaign, Zhou Yongkang, former Politburo Standing Committee member and head of security, and Li Dongsheng, the head of the notorious “610 office,” were purged and sentenced to jail. They both persecuted Falun Gong practitioners and human rights activists.

It’s possible that Peng’s case is part of a power struggle that’s aimed at taking down former CCP leader Jiang Zemin’s faction. In this scenario, Xi’s faction used Zhang Gaoli to send a warning: Jiang’s faction and his cronies can be taken down. Now that Zhang is retired, he doesn’t have the power to fight back. Zhang was promoted to the Standing Committee of the 18th Politburo by Jiang to oversee his faction’s interests. This situation shows that various CCP factions are fighting with one another over power, in anticipation of the upcoming National Congress of the CCP. Regarding Peng, their intention would be to tone down or conceal the situation once their purpose was served, in order to prevent the CCP’s image from being damaged.

Why, then, did CGTN stir up the incident when Peng’s story already started to cool down on the internet? There is no doubt that the new wave of sports and entertainment celebrities get a lot of media attention, but after CGTN’s fake email came out, it immediately went viral on global social media platforms, as CGTN is the CCP’s overseas mouthpiece, and American mainstream media also picked up this story.

Is this the original intention of CGTN? If so, then why did CGTN wait 15 days to respond to Peng’s Nov. 2 post?

Behind the scenes, it’s very possible that CGTN responded to WTA’s call for investigation of Peng’s allegation and its concerns about her safety and whereabouts.

Also, non-current members of the Standing Committee may not have such privileges of using a state apparatus to contain the spreading of the news, as domestic censorship and international countermeasures are totally different issues. The latter needs higher, even top authority. That’s also the reason the spokesperson of the Ministry of Foreign Affairs refused to answer the question about Peng at a daily press briefing.

Another possibility is that this scandal is not targeted at the current leadership, because Zhang is a member of Jiang’s faction. Under Xi, the CCP’s top officials have too many things to worry about: the U.S.-China relations, Taiwan Strait issues, the Sixth Plenary Session, and the upcoming 20th National Congress of the CCP. Peng’s post is not part of their agenda. Therefore, Xi’s faction used CGTN to spread the news as a warning to Jiang’s faction. A low-level official, or someone who has close ties with CGTN, was used to give the orders. Since the order was not from the top, CGTN did the job half-heartedly.

The last possibility is that certain high-level CCP officials thought that the incident had not received enough attention from the international community, and decided to hype it up by fabricating and sending an email through CGTN. If this is the case, it’s unclear if the move is meant to undermine the Jiang faction or the Xi faction.

But the result is probably not what the regime wanted. The CGTN’s email attracted people who were not interested in any China topic, for example, some sports fans. Now they are beginning to pay attention to human rights in China through Peng’s situation, regardless of their political affiliations. This shows a complete change in the attitude of the American public and the international community toward the CCP when compared with the NBA incident two years ago.

In October 2019, Houston Rockets general manager Daryl Morey wrote on Twitter: “Fight for freedom. Stand with Hong Kong”—a message of support for Hong Kong protesters against the extradition bill. The Chinese consulate in Houston asked for immediate action to “correct the error,” and the NBA immediately distanced itself from Morey.

Soon after, Morey posted two tweets to stress that he did not intend to offend anyone and “was merely voicing one thought, based on one interpretation, of one complicated event.” Houston Rockets star player James Harden also apologized for Morey’s tweet. “We apologize. You know, we love China, we love playing there,” he said.

This time, the WTA and many famous tennis players showed their concern and solid support for Peng. Gauging from media reports, readers’ messages, and comments on social media platforms, one can see that people sympathize with and support Peng and don’t believe in the CCP. This time, no one is on the side of the CCP. Why doesn’t the international community believe CGTN?

This is because the international environment has been changing over the past few years. But the CCP has not changed. It has never fulfilled its own promises and it lies all the time. It has always been this way. But Western countries are starting to realize the true nature of the CCP as its corruption is gradually being exposed.

The political landscape in China will soon change.

A poll released by Pew Research Center in 2020 showed a sharp decline in the number of people who view the CCP positively. The CCP can only blame itself. CGTN’s bad reputation also adds to the poll result. CGTN was sued by victims and human rights organizations around the world for its involvement in the CCP’s forced television confession. Its broadcasting license was revoked by Ofcom of the United Kingdom.

On Nov. 20, a journalist of a “China state-affiliated media” posted “three recent photos” of Peng, but this has fueled more concerns because the CCP has already obtained Peng’s personal photos, which is by no means a good sign. The United Nations and the White House have expressed their concern over Peng’s safety.

I would not be surprised if Peng showed up on TV talking about her “happy” life. It would be another type of TV confession that we have seen many times. But I think it’s strange that the CCP continues to use CGTN, which no longer has any credibility, as its propaganda tool.

Regardless of various factors, reasons, and motivations behind this incident, the result is that more people are seeing the true nature of the CCP.