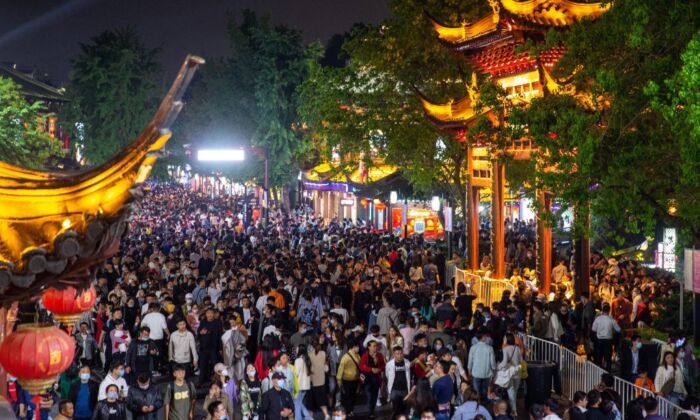 Official data shows that the number of new confirmed cases of COVID-19 in mainland China hit a low level amid a public holiday earlier this month, regardless of the resurgent tourists flooding the territory. One China expert suspects officials manipulated the data to lead public opinion.

May 1, known as May Day or Chinese Labour Day, marks the first day of a five-day holiday. According to state-run media Xinhua, a total of 230 million domestic tourists traveled during the break—a higher number than the pre-pandemic tourism data.

China’s Ministry of Culture and Tourism reported on the same day that no reported cases of CCP (Chinese Communist Party) virus had spread through the system; Xinhua also reported that China has ruled out medium and high-risk areas nationwide.

Zhong Yuan, a U.S.-based China current affairs commentator, doubted the reports reflected the truth and authorities should be aware of the consequences of the holiday mass gathering.

On May 9, China State Council released the speech Premier Li Keqiang gave at the fourth work conference on clean governance on April 26, in which he stressed: “seek truth from facts, release information openly and transparently.”

Although the conference was held five days before May Day, Li’s full speech, including his comments on the pandemic, was not published until two weeks later.

“[It] seemingly revealed a harbinger of the spread of the epidemic,” Zhong wrote in a Chinese-language Epoch Times’ column article, “The Chinese Communist Party’s (CCP) media is trying to exaggerate the epidemic in neighboring countries, so it should be ready to again blame nations outside the country for the epidemic, which would not be concealed in mainland China.”

On May 8, state media posted messages made by the regime’s top health authority three days ago, titled “Risk of Importation of Mutated Strains Cannot Be Ignored,” stating that “the current epidemic prevention and control situation is still serious and complicated.”

Center for Disease Control and Prevention (CDC) of China also suggested a 14-day self-isolation after returning from a trip. Wu Zunyou, a chief epidemiologist at the Chinese CDC, warned the public of asymptomatic infection.

Zhong said that the changed tone would lay the groundwork for a post-holiday wave of cases.

The official data on new cases returned after the holiday ended.

On May 11, the Chinese National Health Commission released 14 new confirmed cases and 25 asymptomatic cases nationwide of CCP virus, commonly known as the novel coronavirus, all of which it claims to have come from abroad.

New cases of infections include 4 in Shanghai municipality and Sichuan Province, 2 in Fujian Province, and 1 each in Hunan, Guangdong, Chongqing, and Shaanxi provinces.