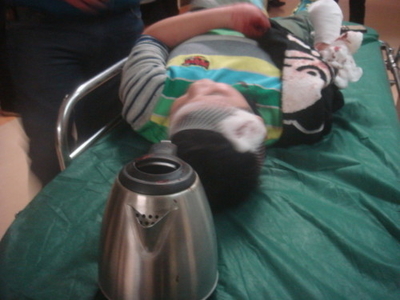 A 10-year-old boy in Shenyang City had his right palm chopped off by his mother’s boyfriend, who then allegedly boiled it up in an electric pot. (Photo from Internet)
China

A ten-year-old boy in China had his hand amputated by doctors after his mother’s boyfriend sliced off his right palm and then allegedly boiled it up in an electric cooker. The palm could not be stitched back on because of the permanent damage it sustained.

According to the Liaoshen Evening News, the incident took place in a guest room on the 6th floor of a hotel in Shenyang City, in Liaoning Province early in the morning on Oct. 22.

The boy’s 38-year-old mother, named Wang booked into the hotel with her young son. They were accompanied by a 30-year-old man, also named Wang, and his 8-year-old daughter. After a heated dispute between the two adults about money, the man lashed out against the boy and sliced his right palm off with a Swiss army knife.

The boy’s mother was not present when the incident happened.

A hotel guest who stayed on the same floor that night described the quarrel he heard, “There was a loud cry of a boy, yelling ‘Papa, No.’” He added, “I sensed that there was a fight. People were moving around rapidly. It sounded as though a man was beating someone.”

After he committed the atrocity, the man sent the boy to the Fengtian Hospital associated with Shenyang Medical College for emergency treatment. According to the doctor, the boy was conscious at the time of arrival and he stayed calm and cooperated well during treatment. “However, the wrist joint of his right arm was completely dissected. It would appear a sharp object caused the injury,” added the doctor.

The doctor also said the chopped off palm had been put into boiling water. The tissue of the palm has turned pale and swollen. “The palm could not be stitched back on due to the severe tissue damage.”

Translated by Leo Chen. Written in English by Christine Ford.