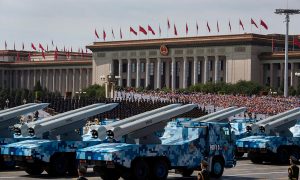 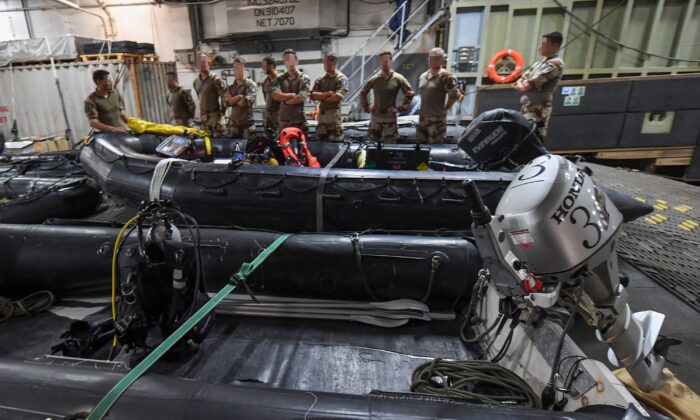 French divers aboard Britain's RFA Cardigan Bay landing ship in the Gulf waters off Bahrain stand next to a rigid-hull inflatable boat during the International Maritime Exercise, on Nov. 5, 2019. (KARIM SAHIB/AFP via Getty Images)
China-US News

A Chinese man has admitted to being part of a scheme to smuggle inflatable military boats from the United States to China.

Ge Songtao, 50, pleaded guilty in a Jacksonville federal court on Nov. 2 to conspiring to submit false information to fraudulently export maritime raiding craft and engines, and attempting to fraudulently export that equipment in violation of federal law, the U.S. Justice Department said in a statement. He faces up to 15 years in prison. A sentencing hearing has not been set.

Ge, the chairman of a Chinese company called Shanghai Breeze Technology Co., in 2018 became interested in buying U.S.-made rubber combat raiding crafts equipped with engines that can run on gasoline, diesel fuel, or jet fuel, prosecutors said. These vessels and multi-fuel engines are used by the U.S. military and can be launched from a submarine or dropped by an aircraft. No comparable engine is made in China.

As part of the scheme masterminded by Ge, his U.S.-based employee Yang Yang, also a co-defendant, placed an order in 2019 with a California-based manufacturer to purchase seven combat rubber raiding crafts with these multi-fuel engines. When the manufacturer suggested the cheaper gasoline-fueled engines, Yang insisted on the military-model multifuel engines, prosecutors said.

Yang also lied to the manufacturer, telling them that her customer was based in Hong Kong rather than Shanghai over fears that a U.S. company would be less likely to sell to a mainland Chinese company, the department said.

Ge facilitated the purchase by arranging wire transfers to a separate company in Hong Kong, which then transferred more than $110,000 to the U.S. manufacturer. He also coordinated plans to send an employee to Hong Kong to collect the raiding craft and engines and then send it to mainland China.

Yang and another co-conspirator, Zheng Yan, have previously pleaded guilty in connection to the scheme. The remaining co-defendant is Yang’s husband, Yang Fan, a U.S. Navy Lieutenant who was based at Naval Air Station Jacksonville. The husband and wife are both naturalized U.S. citizens. Yang Fan’s trial is scheduled for next year.