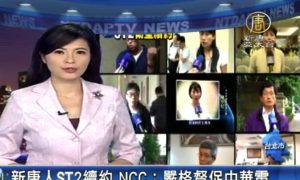 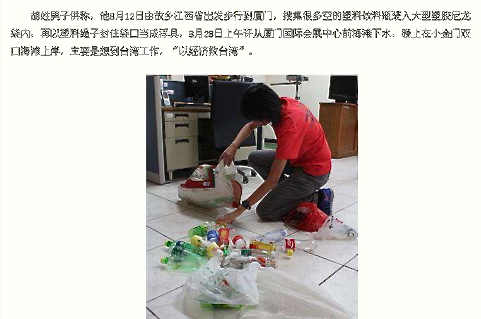 Screenshot showing Hu Xiao in 2013 with a floating device made by filling a bag with empty bottles to help him swim to Taiwan. Hu has now made his sixth unsuccessful attempt to flee across the Taiwan Strait from mainland China. (Screenshot via The Epoch Times)
China

A middle-aged Chinese man has tried for the sixth time to escape mainland China by sea, this time by swimming four hours to reach a Taiwanese island.

Hu Xiao, 42, swam from the Chinese city of Xiamen to the island of Small Jinmen late at night on May 24, according to the coast guards who spotted him.

He was planning to take a boat to Jinmen and then a flight to Taiwan, but the guards caught him, and brought him in for questioning, after they searched his backpack and found wet clothes and 400 yuan ($65).

During one of his previous escape attempts, Hu said he was trying to flee after the Communist Party prevented him from organizing a political party in China, according to Want China Times. He said the public security in China often persecuted him, and he wished Taiwan would accommodate him.

He explained that he wanted to meet Ma Ying-jeou, the Taiwanese president, and borrow money from him to start a democratic movement in China, Want reported.

Hu has been trying to smuggle himself across the border since 2003, when he jumped off a boat and swam to Dadan Island. He was imprisoned once before for his attempts, but when he was released he continued trying to reach Taiwan.

In 2012, Hu filled a bag with empty bottles and used it as a floating device to swim to Jinmen County.

Although his sixth and latest attempt was no more successful than the others, Hu said he would keep trying.

One of the guards said he shook his head when he saw Hu again, according to the China Times, adding that he thought Hu should be featured in the Guinness Book of World Records.

Several netizens commented on Hu’s latest struggle for freedom. An Internet user on Sina Weibo said: “Where there’s a will, there’s a way.”

Another wrote on Yahoo: “If he swam across the Taiwan Strait 30 years ago, he would have been honored as an anti-communist martyr and received a lot of awards. Nowadays, people may consider him crazy.”

A third blogged: “A free and democratic country like Taiwan should accommodate him or extradite him to the United States. Didn’t the government just pass political refugee regulations? Mr. Hu qualifies as a political refugee.”