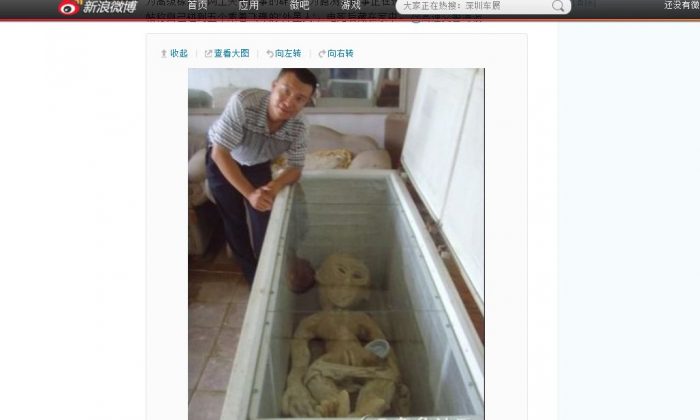 A screenshot of Weibo shows the purported "alien."
Beyond Science

A Chinese man who claimed he found an electrocuted alien and kept it in his freezer for months admitted it was a hoax. He said he captured the creature after he spotted UFOs flying in the sky.

The man, identified as Mr. Li, posted photos of himself standing next to a green, typical-looking alien, causing an uproar on Chinese social media websites. Many said it was a fake from the get-go.

Li, who is from Shandong Province, said he spotted UFOs flying over the Yellow River before one of them fell down from the sky, reported the South China Morning Post, citing local Chinese language media.

He said he kept the creature in his freezer for three months after it was killed by an electric fence. Li said he got DNA tests, proving it was not from Earth.

However, police said that the alien was actually made out of high-grade rubber. Li then admitted the whole thing was fake after authorities investigated him.

Police said he purchased $150 in rubber and other materials from local farmers to construct the alien.

“The alien purported electrocuted and discovered by a man in Binzhou is a high quality imitation,” said Jinan police officer, who was not named, according to a translation provided by the West Australian paper.