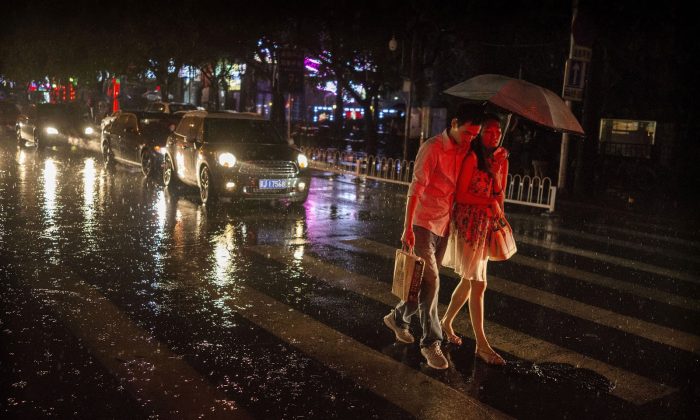 A Chinese couple walk together under an umbrella on a rainy evening on September 4, 2014 in Beijing, China. (Photo by Kevin Frayer/Getty Images)
China

When Mr. Liu, a barber from central China, sought to marry his girlfriend, the woman’s family gave him ten days to gather 100,000 yuan (about $15,000) to pay their requested bride price.

Liu, 21, works in Beijing and is Hubei Province. Despite his best efforts, he was unable to meet the 100,000-yuan mark. Not wanting borrow money from his parents, Liu went to his girlfriend’s parents at their home in Henan Province to propose engagement with the money he gathered from his own savings, as reported by the Dahe Daily on March 27.

The woman’s father, seeing that his prospective son-in-law did not produce the sum he had demanded, flew into a rage and had Liu get into his car. He then took Liu about 50 kilometers (about 30 miles) along the S81 Shangzhou highway and then abandoned the young man by the roadside.

Adding insult to injury, the parents confiscated their daughter’s phone and forbade the two from meeting.

It’s only been two years since Liu first began work, so his savings were sufficient only to gather several tens of thousands of yuan before visiting his girlfriend’s family.

Liu was eventually discovered by police in the evening and taken back to Beijing. “I went happily but returned in dejection,” he told a Henan traffic officer.

In recent decades, the draconian one-child-policy coupled with a traditional preference for sons has led to a massive gender gap. As Chinese men outnumber women by tens of millions, many parents are demanding ever more of the men looking to marry their daughters.

Not only is the modern Chinese groom expected to pay a bride price that can shoot into the hundreds of thousands of yuan or more, but his in-laws-to-be may demand that he own a car and a home before tying the knot.

This February, a widely-circulated hoax told of a middle-class Shanghai woman who supposedly visited her boyfriend’s impoverished family in rural Jiangxi to celebrate the Chinese lunar new year, only to break up with him at the scene.

Though the woman later admitted that she fabricated the story, the incident went viral on Chinese social media with netizens using the narrative to highlight glaring  nationwide socioeconomic hardship and discrimination against the rural poor.