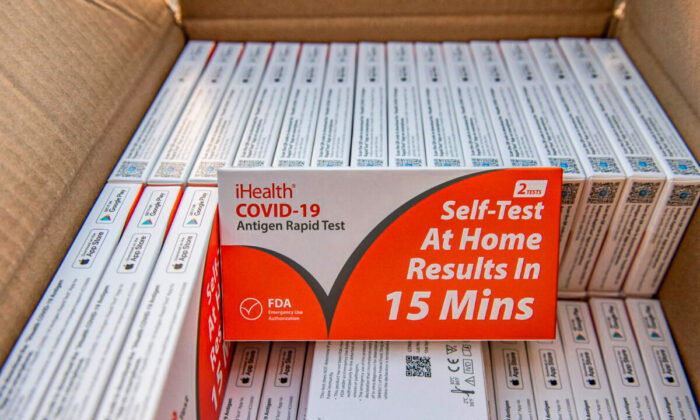 A Chinese-owned company that secured a nearly $2-billion contract with the U.S. government to supply COVID-19 self-test kits has sought to give its brand a further boost—by marketing at the Super Bowl.

From Feb. 5 to Feb. 12, iHealth Labs, a California-based subsidiary of Chinese medical device maker Andon Health, handed out 120,000 test kits to visitors at a pre-Super Bowl event at the LA Convention Center. On game night, it ran advertising featured on LED panels and in branded openings on the stadium’s video board during quarter-time breaks, according to the company.

With these kits—a bright orange box labeled with the fine print “made in China”—“fans can test themselves before gathering to watch the big game,” read a press release from the company on Monday.

The National Football League required attendees aged 5 years or older of the Super Bowl LVI, held at Los Angeles’ SoFi Stadium on Sunday, to present a vaccination card or show proof that they are virus-free, in the form of a negative PCR test within 48 hours of the game or a negative rapid antigen test from within 24 hours of the event.

iHealth Labs has emerged as a major contract winner in the Biden administration’s push to distribute 1 billion free at-home test kits to Americans.

Over the last month, it has secured federal contracts worth $1.8 billion to supply 354 million of such kits, accounting for about a third of the total White House rollout. That is on top of the state orders it has received; The company on Monday said it is also working with 20 state governments and other organizations in an effort to “make at-home testing more accessible.”

The combined orders from the New York State Department of Health and the state of Massachusetts during December and January alone carry a value of at least $333 million, Andon’s filings have shown.

iHealth has now hired another 16,000 manufacturing hands and expanded its daily production capacity to over 10 million to meet the U.S. demands, the company said.

The Super Bowl advertising campaign is a sign that iHealth’s ambition doesn’t stop just there.

“Testing remains an important tool in the fight against COVID-19, but this country is facing a severe testing shortage,” Jack Feng, partner and chief operating officer at the lab, said in the press release. “Our company’s goal is to bring COVID-19 tests to every American family in a timely manner.”

What is left unsaid is iHealth’s ties with China that are now attracting increasing scrutiny among some GOP lawmakers.

For Sen. Roger Marshall (R-Kan.), the fact that Chinese-made COVID tests were openly promoted at America’s largest sporting events says a lot about “just how reliant our country is on medical supplies from China.”

“Unfortunately, minimal actions have been taken to bring this manufacturing back to the United States and instead the Biden administration continues to send taxpayer money to China for millions of COVID tests,” the senator, who co-sponsored the bill No Taxpayer Dollars for Communist China COVID Tests Act (S.3565), told The Epoch Times.

“We should be investing in American manufacturing and creating jobs at home instead of continuing to fund the CCP, particularly when their obstruction to uncover the origins of this virus’ outbreak is ongoing,” said the senator.

Disruptions caused by the pandemic have elevated supply chain security to a bipartisan issue, with politicians from both sides of the aisle warning the United States cannot be dependent on China for critical supplies, on economic and security grounds.

Republicans, however, believe that their Democratic counterparts are not doing enough.

On Feb. 2, Sen. Rick Scott (R-Fla.), the bill’s lead sponsor, asked for unanimous consent on the Senate floor to pass the act. The move was blocked by Senate Democrats.

A Focus on US Market

iHealth Labs was founded in 2010 in Mountain View, California, co-owned by the Tianjin-based Andon Health and Chinese smartphone maker Xiaomi, which holds a 70 percent and 20 percent stake respectively. Xiaomi, which was taken off a U.S. trade blacklist last May, was flagged in Lithuania in September for its built-in censorship features.

The pandemic has been a boon for Andon, which had previously suffered losses for several years in a row. Its shares skyrocketed by as much as 14 times since obtaining approval from the Food and Drug Administration to sell self-test kits in the United States.

Despite its reception among various levels of U.S. governments, Andon has yet to get authorization to sell the test kits in China. During an exchange with investors on Feb. 9, Andon sidestepped multiple questions about whether it has made sales outside of the United States, saying that its main focus, for now, is on the U.S. market.

The Epoch Times has reached out to Andon and iHealth Labs for comment.

iHealth Labs has not responded to The Epoch Times’ previous questions about its connection with Andon Health, which is not specified on its website. The lab has delivered over 21.1 million test kits for its federal contract as of Feb. 7, according to Andon’s filings.

Chinese regulators have recently summoned Andon’s executives over incomplete reports by iHealth about its ability to detect Omicron, the company said on Monday.