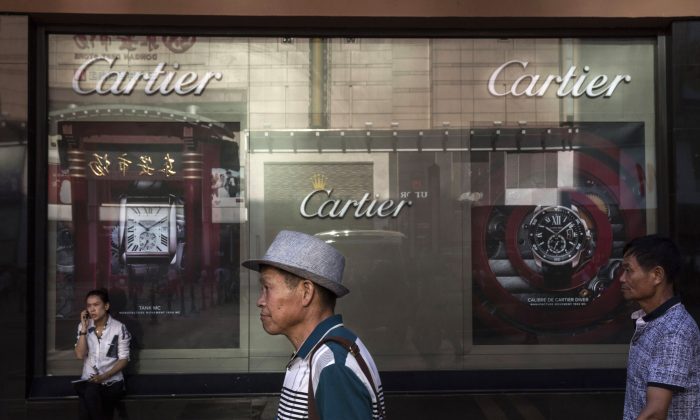 E-commerce sales a growth driver in 2017
By Fan Yu

Luxury shopping is back in vogue in China. Sales growth increased year-over-year for the first time since growth stalled after Chinese communist leader Xi Jinping began its anti-corruption campaign in 2013.

Today, much of the sales growth is coming from within China, with consumers eschewing overseas shopping trips to make their purchases domestically and online.

Luxury goods sales growth had historically been strong in China. The market expanded 19 percent annually from 2007 through 2014, according to consultancy Bain & Co. “But since 2014, China has seen a more modest performance,” Bain said in its 2016 Luxury Goods Market Study.

During 2013 and 2014, luxury sales were hampered by Xi’s anti-corruption campaigns. That was followed by 2015’s stock market crash which further sapped consumer spending power. “However, in 2016, at constant exchange rates, the market grew 4%, the first sign of a revitalization in three years.”

Kering Group, which operates Gucci and YSL brands, said on Feb. 10 that 2016 same-store sales increase of 11 percent in Asia ex-Japan, which was mostly led by a rebound in China. LVMH, which owns brands such as Louis Vuitton, Bulgari, and Hennessy, also highlighted positive momentum going forward in its fourth quarter earnings call with investors. Hugo Boss Group’s Mainland China same-store sales also increased close to 20 percent during 2016, adjusted for currency.

That’s good news to the luxury goods sector—from Swiss watches to high fashion and expensive cognac—for which Chinese consumers make up around 30 percent of all global sales. In a note to investors, analysts at investment firm Exane BNP Paribas expects growth to continue to trend upwards during 2017, with Swatch Group, Richemont SA, and Burberry the companies most likely to gain.

The growth during the second half of 2016 was led by middle-class consumers, a segment that retailers and luxury brands aim to court going forward. Middle-class sales will be especially important as sales in the super high-end bracket could be volatile this year leading up to the 19th National Congress of the Communist Party in the autumn.

Positive contribution is also expected to come from a platform that has been underutilized by luxury brands in the past—e-commerce.

But that is quickly changing, according to a joint study by Exane BNP Paribas and ContactLab. Luxury brands are increasing their presence online and on mobile across a variety of platforms, including standalone websites and storefronts on popular Chinese e-commerce portals such as Tmall, Secoo.com, and JD.com. This is a departure from luxury sales strategy in the West, where most of such sales still originate from physical stores and white-glove customer service is a large driver of purchase decision.

Increased personalization and localization has helped some brands in China.

Montblanc and Chanel are two luxury brands that set up stores within the social networking hub WeChat, to take advantage of Chinese consumers’ affinity for mobile shopping. Burberry is also one of a handful of brands that offer localized website content, such as partnerships with Chinese celebrities and region-exclusive promotions.

There are some headwinds facing luxury retailers, such as a weak yuan and Beijing’s crackdown on overseas spending. These factors will help increase sales domestically at the expense of overseas purchases.

The growth during the second half of 2016 was led by middle-class consumers.

Last year’s so-called parcel tax enacted by the Finance Ministry has already put a dent in online overseas purchases of luxury goods. The tax, similar to import duties, is levied on all consumer online purchases shipped directly to China. At the same time, Beijing also cut actual import duties on imported goods such as clothing and cosmetics to drive down domestic prices and repatriate overseas Chinese consumers spending.

These efforts—along with recent terrorist attacked in France and Germany—have largely kept Chinese consumers home in the second half of 2016.

Pricing decisions by luxury retailers also contributed to this trend. Luxury goods maker Richemont—which owns Cartier, Van Cleef & Arpels, and Dunhill—and Chanel were two of the first companies to normalized prices globally, setting the same price on a single product across all markets before effects of local currencies and taxes.

This trend served to narrow the price difference on the same item between China and abroad—a principle reason why many Chinese consumers previously made purchases outside of China.

Woman Pretends to Sell Luxury Goods From the US, Is Actually Still in China