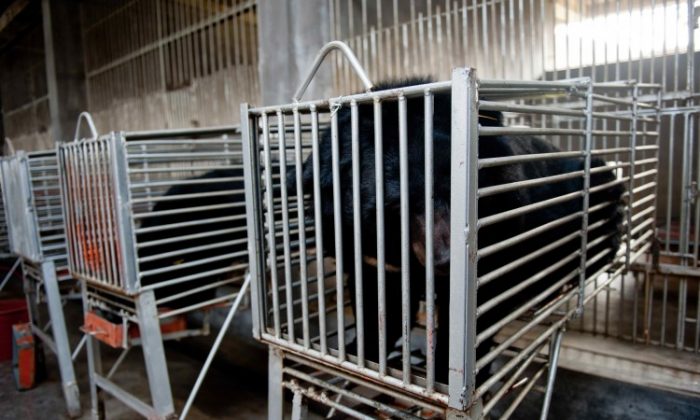 The bears in their cages as they are prepared to have their biles drained at Guizhentang's controversial bear bile farms in Hui'an, southeast China's Fujian Province on Feb. 22, 2012.. (STR/AFP/Getty Images)
China

A Chinese company, in the business of extracting bile from live bears, is seeking an initial public offering (IPO) to raise operating funds and increase the production of bear bile. Bile, extracted from live bears for use in traditional Chinese medicine, is a lucrative business in China. It is also highly controversial.

Fujian Guizhentang Pharmaceutical was listed by China’s Securities Regulatory Commission’s in its Feb. 1 IPO announcements. Guizhentang, the largest bear bile farm in southern China, drew strong opposition from an animal rights group and from concerned Chinese citizens because the bile extraction causes pain to the bears.

“We believe, a company whose main work is to extract bile from live bears should not be allowed to offer stocks to the public,” Animals Asia Foundation (AAF) said on its website on Feb. 14.

To dispel criticism against it, Guizhentang held the first of two media events on Feb. 22, inviting members of the press to witness bile extraction from a live bear. It also said its doors are always open to the public to observe their operations.

On its website Guizhentang also said they were using a new “tubeless drainage” method, extracting bear bile in 5-8 seconds without causing pain to the bears.

“We can say that opposing us is to oppose the country,” Qiu said.

The Chinese government has not made any official statement regarding the controversy, but the Chinese Medicine Association (CMA) under the State Administration of Traditional Chinese Medicine supports live bear bile extraction and has even raised it to the level of protecting the development of Chinese medicine.

Fang Shuting, the chairman of CMA was quoted in a Feb. 23 report by thefirst.cn as saying: “Bile extraction is like using a water faucet–natural, painless. The bear can go out and play afterwards. I don’t think the procedure is abnormal, it may even be enjoyable.”

According to a 21st Century Business Herald report on Feb. 22, CMA sent out a media alert to Chinese media last November, accusing AAF of being supported by western interest groups to suppress ethnic Chinese medicine and that if the bear farming industry were crushed, many other emergency medicines would also disappear.

Zhang Xiaohai, AAF’s director of External Affairs China, responded with a statement saying that all their operating income is published on their official English website, anyone can take a look.

Qin Xiaona, the president of Beijing Prevention of Cruelty to Animals Association told The Epoch Times that the comments by CMA are irresponsible, and their use of Cultural Revolution style language to discredit a foreign animal protection organization would make them lose credibility abroad and in China.

People’s Daily, in a commentary on Feb. 24, praised Guizhentang’s media event as an opportunity to openly present the bear bile extraction procedure.

After the media event and extraction demonstration, a Central People’s Broadcasting Station said, “The black bear was quietly eating during the whole procedure and didn’t show any sign of pain.”

Despite the endorsements and assurances from the regime’s mouthpiece media, netizens commented negatively about Guizhentang and the live bile extraction practice.

After Guizhentang launched its official Weibo social networking site on Feb. 23, tens of thousands of users, including some celebrities, responded with: “Get out of here!”

A 15 minute-long video, entitled “Moon Bear,” uploaded and widely spread on the Internet by Chinese netizens, has exposed the cruelty of bile extraction from live bears in China and dark side of this industry.

“Moon Bear” was made by Xion Gjunhui, Tu Qiao, and Chen Yuan, three independent producers. It depicts shots of crying bears and of the wounds inflicted by the bile extraction procedure.

Tu, the director of the video, told Guangzhou Daily that she learned from a report in early 2008 about the cruelty of taking bile from live bears. This prompted her to make the documentary. The team spent four years shooting live footage of how bile is extracted from bears at 11 bear farms in Jilin, Liaoning, Sichuan, and other provinces.

Responding to the comment made by the CMA chairman, that bears looked quite comfortable while their bile was being extracted, Tu said from what she saw, the so-called painless bile extraction was not so.

“Actually, there are always ulcers and inflammation in the wounds on the bears,” she said.

A bear farmer in Yanji City, Jilin Province said in the video that because the wounds always inflame, they have to inject the bears with penicillin and feed them anti-inflammatory drugs every day.

On April 19, 2010 the AAF staff visited a bear farm in Wendeng City, Shandong Province. They checked the health of 10 bears, which were used for bile extraction. They found that the cuts were seriously infected. Bile mixed with pus, blood, and other body fluid was leaking from the wounds, according to a report on the AAF website.

Only North Korea and China have legalized bile extraction from live bears. Bear bile powder in China is used in traditional Chinese medicine, health care products and is even traded as a commodity, with bear farmers, bear farms, and pharmaceutical companies forming a supply chain.

China learned the technique of extracting bile from live bears from North Korea in 1984. Since then, this has become a new way for Chinese farmers to become rich. A civil servant in Ziyang County, Sichuan Province raised more than 200 bears in the 1980s. The bear farm became a demonstration farm for the government to promote the practice, according to a Feb. 24 Southern Weekly report.

In the early 1990s, under the tacit approval and promotion of some local governments, over 480 bear farms operated in China.

As for the financial returns of China’s bear bile industry, Chen Jyh-hong, general manager of Guizhentang, told Yangcheng Evening News that a normal bear has 140 ml bile extracted twice a day on average. About seven to nine ml of bear bile can produce 1 gram of bear bile powder. The market price for 1 gram is 118 yuan (US$19). Guizhentang produces more than 2,000 kg bear bile power a year.

Guizhentang’s current gross annual income is about 100-200 million yuan (US$16-32 million). It is the largest bear farm in southern China, raising more than 400 black bears. By becoming a listed company, Guizhentang hopes to attract more investment money to achieve the goal of producing 4,000 kg bear bile powder a year and raising 1,200 caged bears.

According to a research report released by Capital Securities at the end of 2011, there are over 10,000 domestic and wild bears in China, with the total production of bear bile powder being 30-35 tons per year.