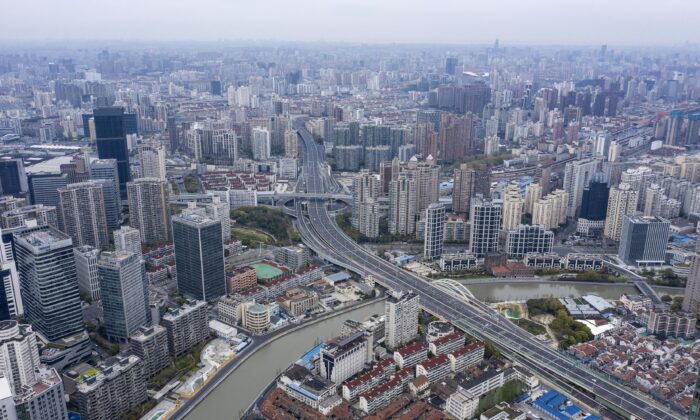 Empty roads during a phased lockdown due to COVID-19 in Shanghai, China, on Apr. 5, 2022. (Qilai Shen/Bloomberg via Getty Images)
Chinese Regime

In a recent economics symposium, Chinese Premier Li Keqiang emphasized the need to stabilize the economy and revealed that China’s current economic situation is “very challenging.” But on June 29, Chinese Communist Party leader Xi Jinping reiterated the “zero-COVID” policy and called the policy important in affecting economic development and advancement. The clash between Xi and Li is once again in the spotlight.

On July 7, Li convened an economic seminar in Fujian Province with key officials from the provincial governments of Shanghai, Jiangsu, Zhejiang, and Guangdong.

At the meeting, Li said that China’s economy has undergone a very unusual experience since the start of this year, “but looking forward, our economy is recovering, a very big task.” He further adds, “but the foundations for recovery are not stable and a lot of efforts are needed to stabilize the economy.”

Li said that the five provinces and cities along the southwest coast account for more than a third of China’s GDP, and nearly 40 percent of total fiscal revenue. He demands these cities and provinces to continue “stabilizing the economy’s anchor” and “further breaking through the blockages in the industrial and supply chain and promote economic mechanisms to normal as soon as possible.”

He further said that these particular areas’ economies are more energetic and should help main market players, especially small and medium-sized enterprises and individual industrial and commercial households. He emphasized that 70 percent of Chinese migrant workers work in these 5 cities and provinces so “we must do everything to stabilize employment of local and migrant workers.”

The developed coastal regions are more integrated with the world economy through international trade on the Yangtze River Delta—the eastern coastal region centered around Shanghai and the Pearl River Delta in southern Guangdong province—accounting for nearly 60 percent of China’s trades, said Li. He said it is important to speed up the level of collection and distribution of items in ports and steady foreign trade and investment.

Xi previously emphasized the need to adhere to the “dynamic zero-COVID” policies and said that he would rather sacrifice economic development to a certain degree to implement this policy. He also said that if one calculates the total losses and gains, this “prevention measure is the most economical and effective.”

The dispute between the Chinese Communist Party’s coronavirus responses has become public. Li Keqing never mentions the “dynamic zero-COVID” approach in public speeches while Xi continues to emphasize the need for “dynamic zero-COVID,” even at the cost of the economy.

Chinese current affairs commentator Lu Tianming told The Epoch Times that China’s economy is now in a very bad state, especially this year as all metrics are declining. The main reason is that under the “dynamic zero-COVID” policy, extreme closure measures lead to poor logistics, sluggish demand, and declining exports; which disrupt industrial chains and local enterprises that can not get foreign trade orders, eventually forming a vicious circle.

“In China, the premier of the State Council is responsible for economic issues,” said Lu, “but Li does not approve the dynamic zero-COVID policy, so now he is unwilling to take responsibility for the continuous economic decline caused by this policy and this is why he never mentions dynamic zero-COVID in public. He wants to stabilize the economy, employment and opening up, but this precisely contradicts the policy Xi wants, thus creating a conflict.”

Lu also said that Xi sees the zero-COVID policy as his political achievement and has tied himself to that policy and cannot give it up.

“Giving up now is basically admitting that his policy and decisions are wrong, which will give his political rivals a chance to attack him, so he has no other way but to keep going down this path.”

“There will be a redistribution of power before the 20th National Congress of the Chinese Communist Party and now the Beidaihe Conference is about to take place, so this is a critical moment on whether Xi will be reelected.”

“[Xi] was previously criticized by the Party on [supporting] the Russian invasion of Ukraine, so the last chance he has is the so-called epidemic control, and this naturally clashes and conflicts with Li’s approach. Xi is more concerned with creating a favorable political situation than he is with the current economic issues.”

“In short, Li and Xi form a natural opposition,” concludes Lu. “It is impossible for Li to support Xi’s extreme zero-COVID policy and let the economy collapse. Their current clash is impossible to reconcile and no one can take a step back.”

Li said the five provinces and cities along the southeast coast are significant contributors to China’s economy, most small enterprises and farmers cluster there and closure measures lead to surging employment. “When firms’ earnings and profit growth are not good, tax revenue will also drop sharply. The Chinese Communist Party’s treasury is already quite empty and Li mentioned that provinces and cities cannot rely on the central government during previous meetings, suggesting that the central treasury is also quite empty. So from Li’s perspective, China’s economy has reached a very dangerous state,” Lu said.

China’s economy has been on a steep decline since Xi’s zero-COVID policy was implemented, and it is clear that Xi and Li clash on epidemic prevention and economic issues.

On May 25, Li convened an urgent meeting with about 100,000 Chinese Communist Party officials at all levels, emphasizing the need to “stabilize the macroeconomic metrics.” Li did not mention the zero-COVID policy at the meeting and publicly acknowledged that China’s economy is slipping out of a reasonable range.

On the same day, the Chinese Communist Party’s mouthpiece People’s Daily published an article titled “China’s Economic Development Prospects Will Be Brighter,” claiming that under Xi’s leadership, China has made major achievements in dealing with the Ukraine crisis and COVID containment measures.

But previously on May 23, Li admitted there are increasing risks that China’s economy will decline and deployed 33 measures to stabilize the economy.

On May 18, in Xi’s address to the Conference of the 70th Anniversary of CCP’s Global Trade and Investment Promotion Summit, he said that the epidemic also caused globalization to go backward, but did not mention China’s economic decline.

On the same day, Xi mentioned in his address to the opening ceremony of the 73rd World Health Assembly that “it is necessary to strengthen the coordination of international macroeconomic policies and maintain the stability and smoothness of global industrial and supply chain, in order to restore [the] global economy.” But he did not mention the downward pressure China’s economy faces and Xi pledged to provide $2 billion in international aid within two years to support developing economies in responding to the epidemic.