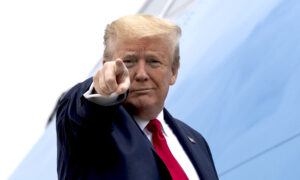 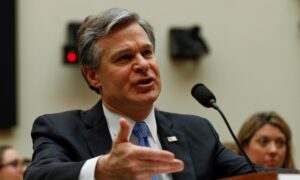 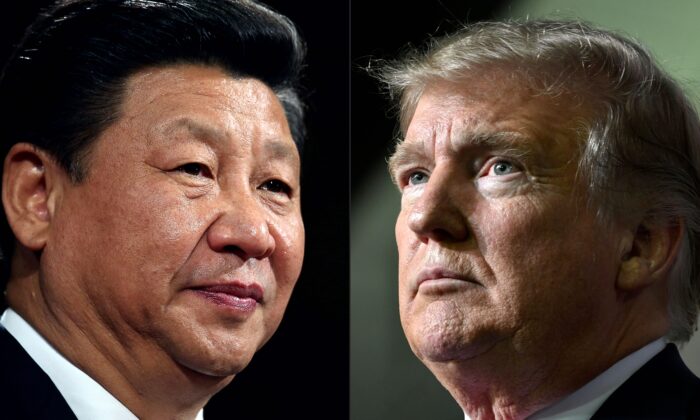 This combination of pictures created on May 14, 2020, shows recent portraits of CCP leader Xi Jinping and President Donald Trump. (Dan Kitwood and Nicholas Kamm/AFP via Getty Images)
Thinking About China

In the past month, the United States has taken a series of harsh measures against China, which Beijing could hardly counter effectively. However, it wasn’t until the closure of the Chinese consulate in Houston that Beijing finally realized that the deterioration of U.S.–China relations is now irreversible.

The Chinese people whose greatest desire was to immigrate to the United States or send their children to the United States to study also realized that escalating tensions between the countries have put an end to their dreams. Apparently in China these days, lots of complaints and bitterness are being directed against the Chinese regime’s policymakers.

There’s a Chinese saying about how a person’s character determines his fate. Likewise, the character of state leaders determines the fate of the country.

While it’s been two years since the U.S.–China trade war started, the real deterioration of bilateral relations occurred only recently. By tracing the root cause, we can see that Xi made two wrong moves on key issues, and these two mistakes have led to additional missteps—like a chain reaction.

Beijing Thought Trade War Was Only With Trump

Xi’s first mistake was to attempt to interfere with the U.S. elections. That wasn’t an impromptu idea of Beijing’s top leaders, but a decision based on careful planning.

The authors studied the local impact of two lists of retaliatory tariffs proposed by China, going as detailed as the county level. “The Chinese tariff lists seem optimally designed to especially agitate President Trump’s red-state base,” the report stated. “After all, of the 2,742 counties with employment in the industries potentially impacted by the current Chinese tariffs, 2,247 (82 percent) of those counties voted for Trump in 2016, while just 439 (18 percent) supported Clinton.”

Data from the U.S. Department of Agriculture clearly showed that tariff increases on pork and soy products alone would have a huge impact on the red states in the Midwest. During the 2016 U.S. presidential election, among the top ten soy- and pork-exporting states, eight voted for President Trump. Those eight states were Indiana, Iowa, Kansas, Missouri, Nebraska, North Carolina, Ohio (a major swing state), and Oklahoma. (Illinois and Minnesota voted for Hillary Clinton.)

Although we don’t know the motives behind the Brookings Institution’s release of such a report, it indeed provided a strong basis for Beijing to come up with its “waiting for favorable change” strategy. In addition, the pro-China elites in U.S. political, business, academic, and media circles would certainly tell Beijing that, as long as Trump loses reelection, U.S.–China relations will continue along the original track.

Democrat politicians frequently gave speeches to curry favor with China. Democratic Party presidential candidate Joe Biden, before he secured the nomination, once said that China was not a competitor, but a partner. On Aug. 5, Biden publicly stated in an interview with National Public Radio that, if elected, he would reverse the Trump administration’s tariffs on Chinese imports, explaining that in his opinion, this is equivalent to imposing tariffs on U.S. companies and consumers. In an Aug. 7 interview with CNN on election interference, House Speaker Nancy Pelosi clearly stated, “the Chinese … prefer Biden.”

All these made Beijing’s top leaders come to the conclusion that the trade war is only the personal preference of Trump, who is hostile toward China. They believe that when the White House changes occupants, U.S.–China relations will return to the state they were in before Trump.

However, Xi’s judgment was based solely on the information and suggestions provided by pro-Beijing forces in the United States, as well as Chinese think tanks’ analysis of U.S. media reports. In other words, Xi is not clear about the undercurrent of American politics—the silent majority, which is deliberately ignored and suppressed by the Democratic Party and the mainstream media.

As a result, the Chinese regime made two wrong moves: one was to intervene in the U.S. presidential election, and the other was to deliberately conceal the severity of the coronavirus pandemic.

China Uses Various Methods to Interfere With US Elections

In addition to hurting the economy of pro-Trump states, Beijing also intervened in the U.S. election in other ways.

The U.S. Senate Intelligence Committee has been investigating the threat of China’s interference in the U.S. election for several months, and has accelerated the pace of its investigation, with the 2020 election rapidly approaching.

On July 28, the committee held a hearing on this issue. Several U.S. intelligence officials issued warnings about China’s improvement in its ability to interfere in American politics. Some of the main concerns were the following: China is advancing its ability to interfere in U.S. local electoral systems and to influence members of Congress engaging in China policies; China is trying to disrupt private communications among U.S. politicians and all relevant candidates; and China has demonstrated the technical ability to establish political propaganda networks on American social media platforms, some of which have gone to the point of disseminating false information.

U.S. Secretary of State Mike Pompeo announced at a press conference on Aug. 5 that “the State Department’s Rewards for Justice program is offering a reward of up to $10 million for information leading to the identification or location of any person who, acting at the direction or under the control of a foreign government, interferes with U.S. elections by engaging in certain criminal cyber activities.”

Deliberately Concealing the Pandemic, Economic Stagnation in the US

There are numerous analyses tracking the spread of the coronavirus (CCP virus) pandemic around the world. From the perspective of the United States, the main concerns are:

China concealed information about the outbreak and its severity, and even convinced Trump that it was controllable. Xi was able to convince Trump because the latter had always believed that he had a good personal relationship with Xi.

Chinese state-run media gloated about the severity of the pandemic in the United States, thinking it could destroy the U.S. economy and help the Democratic Party win the 2020 election.

Statistics show that the U.S. economy fell 4.8 percent in the first quarter, which was the first negative growth since the first quarter of 2014. It was also the largest decline since the 8.4 percent decline during the global financial crisis in the fourth quarter of 2008. According to the U.S. Department of Commerce, this report does not fully reflect the impact of the pandemic on the U.S. economy, implying that the actual economic decline could be worse.

In an exclusive interview with the Fox News program “Sunday Morning Futures” on May 10, White House trade adviser Peter Navarro stated that Trump “built the most powerful and beautiful economy in the world in three years,” but, “the Chinese Communist Party took it down in 60 days.”

Americans value human lives most, and a strong U.S. economy would have been the strongest guarantee for Trump’s success in the 2020 election. When China deliberately concealed the severity of the pandemic, it sparked intense indignation from the American public and made Trump furious.

Why did China decide to interfere in U.S. internal political affairs, especially the presidential election?

In short, there are two reasons:

One, interfering in other countries’ internal affairs is the CCP’s political tradition.

By exporting revolutions to the world, the CCP supports political opposition forces and helps them overthrow their ruling parties. This was a political tradition formed as early as during the Mao Zedong era. It is particularly evident in Southeast Asian countries, where Beijing exploited overseas Chinese organizations, schools, and consortia to achieve its agendas. These actions triggered anti-Chinese campaigns in Southeast Asian countries several decades ago.

Second, as early as the 1950s, Mao was very wary of the “peaceful evolution” approach proposed by the United States and countered it with a series of strategic policies.

To make a long story short, in the 1950s, U.S. Secretary of State John Foster Dulles formally proposed a “peaceful evolution” strategy to target the Soviet Union. He pointed out that “liberation [of people in socialist countries] can be achieved through means other than war.” He expressed satisfaction with the “liberalization-demanding forces” that had emerged in some socialist countries, and placed his hope on the third and fourth generations within socialist countries.

Mao scoffed at Dulles’ theory. Since then, the CCP has paid full attention to every attempt and move toward “peaceful evolution” from Western countries. China’s economic reform movement in the 1980s does not mean the CCP has ever slacked off in this respect. The only difference is that the CCP stopped using the term “Cold War.” Instead, it frequently accuses the United States and other countries of inciting “color revolutions” (in reference to uprisings in Ukraine and the Arab Spring) instead.

At the same time, the United States’ internal politics has undergone profound changes after the Cold War. Leftists have been infiltrating the education sector for a long time and almost succeeded in “color revolution” within the United States itself. In this process, what role did China’s all-encompassing penetration into the United States play? It has been going on for decades, but Americans have just begun to look into it.

To summarize, I would like to emphasize three main points.

One: The ancient Chinese general and military strategist Sun Tzu said in his famous book “The Art of War,” “If you know the enemy and know yourself, you need not fear the result of a hundred battles.”

Two: In terms of systemic defense capabilities, China has built a strong defense system, and oftentimes acts overly defensive, while the United States is like a courtyard with no fences, making itself vulnerable from all sides.

Three: It has been a fairly easy job for China to penetrate into the United States and intervene in American politics, as there was virtually no counterattack from the United States. Therefore, China did not even bother to draw a bottom line for itself.

Why is it that Beijing dares to treat the United States with contempt? It is because Chinese leaders believe that with the Democratic Party controlling the House of Representatives, Trump won’t be able to get things done efficiently and carry out his China policies.

Now that these two moves have proven to be wrong, what is the biggest challenge the CCP is facing? The CCP is placing all its hopes on the Democratic Party and Democratic presidential candidate; however, I believe the Democrats could only win in preelection polls. They have no chance to win in the actual election.