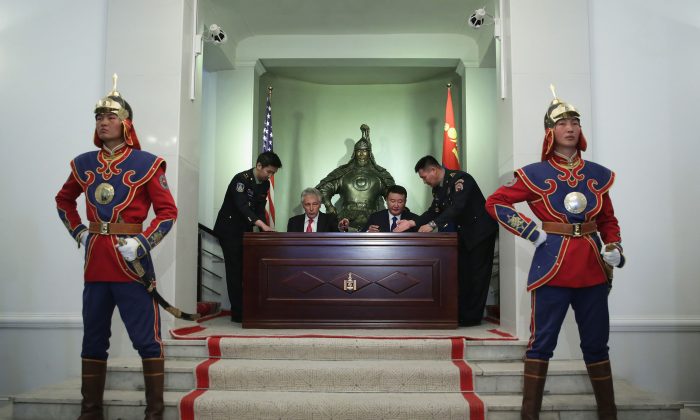 US Secretary of Defense Chuck Hagel (L) and Mongolian Defense Minister Dashdemberal Bat-Erdene (R) participate in a signing ceremony of a joint vision statement at the Mongolian Ministry of Defense on April 10, 2014, in Ulaanbaatar, Mongolia. Mongolia has in recent years sought closer ties and cooperation in security matters with the United States. (Alex Wong/Getty Images)
China

Chinese Communist Party head Xi Jinping is visiting Mongolia on Aug. 21 and 22, his first since assuming office two years ago, also the visit from a Chinese regime leader in over a decade. Analysts predict trade and security discussions to top the agenda.

In light of China’s recent territorial disputes with countries to its south and east, i.e. Japan, Korea and India, Xi may seek closer collaboration with its northern neighbor to strengthen its influence in the region.

Xi’s visit has been in the works for several months. Mongolian President Tsakhiagiin Elbegdorj traveled to China in May for the Conference on Interaction and Confidence-Building Measures in Asia (CICA) summit in Shanghai. While in China, Elbegdorj met with Xi Jinping and invited him to visit Mongolia. In June, Chinese Foreign Minister Wang Yi traveled to Mongolia, and arrangements for Xi’s visit were presumed to be high on the agenda.

China has good reasons to be interested in Mongolia. They share a long border and Mongolia exports much of its coal and copper to China. The China Coal Industry Association’s vice president Lu Yaohua predicts China will import around 300 million tons of coal this year, 1/10 of which will come from Mongolia. According to Info Mongolia, three Mongolian coal-mining companies recently became signatories to a memorandum of understanding ensuring the export of 1 billion tons of coal to Shenhua Energy Group of China in the next 20 years.

China has been Mongolia’s largest investor and trading partner for the past decade. Bilateral trade has soared to US$6 billion in 2013 from just US$120 million in 1994 and makes up more than half of Mongolia’s total foreign trade.

Growing US interest may have also nudged China into forging closer ties. With U.S. Department of Defense assistance and cooperation, Mongolia and the U.S. jointly hosted “Khan Quest 06,” a peace-keeping exercise involving troops from Mongolia, the United States, and 5 Asian-Pacific nations, in the summer of 2006 and “Khan Quest 07” a year later.

However, Bat-Erdene ruled out the possibility of hosting U.S. bases, which currently exist in Japan and South Korea.
When Mongolian president Elbegdorj met with Chinese president Xi Jinping in May, Xi mentioned his hope that China and Mongolia could move beyond economics, increasing the number of political and military exchanges, which is seen by some as China’s response to the “joint vision” statement from one month earlier.

Mongolia has also reached out to East Asia. On the 40th anniversary of establishing bilateral diplomatic relations, Mongolia’s President Tsakhia Elbegdorj and Japan’s Prime Minister Shinzo Abe met in Tokyo on July 22, 2014, to sign a Joint Statement on affirming the final roadmap toward instituting an Economic Partnership Agreement (EPA).

In 2012, Mongolia passed the Strategic Entities Foreign Investment Law, though later amended, it was aimed at preventing Chinese state-owned company Chalco from taking majority ownership of a Mongolian coal miner.

China and Mongolia signed a border treaty in 1962. After the Sino-Soviet split, Mongolia aligned itself with the Soviet Union and as a result, bilateral ties between China and Mongolia remained tense until after the cold war. Mongolia has since emerged as a parliamentary democracy and the two countries have had mostly normalized relations over the past 20 years.

Ulan Bator has long sought membership in the Asia-Pacific Economic Cooperation (APEC), and as this year’s host of the APEC summit, China has the power to further Mongolia’s bid with a high-level invitation. India’s Prime Minister Narendra Modi has already received such an invitation; Mongolia is likely hoping to snag one as well. Xi Jinping has already pledged to support Mongolia in joining APEC.