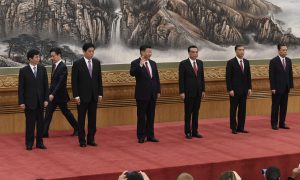 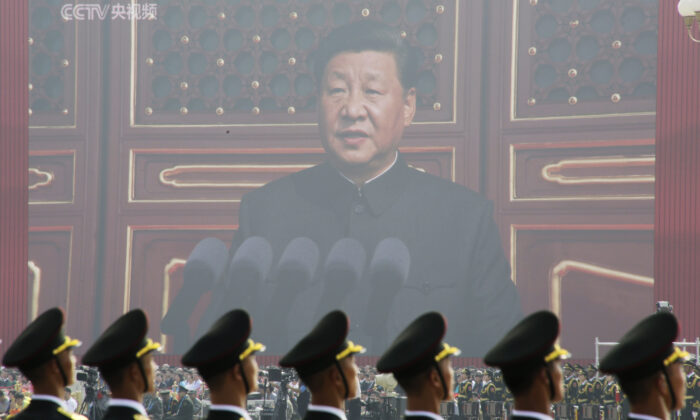 ldiers of the People's Liberation Army are seen before a giant screen as Chinese leader Xi Jinping speaks at the military parade marking the 70th founding anniversary of People's Republic of China, on its National Day in Beijing on Oct. 1, 2019. (Jason Lee/Reuters)
Analysis

April 4, 2021, Easter Day, was the same day as the Ching Ming Festival in China, also known as Tomb Sweeping Day, the day when the Chinese honor ancestors and families gather to pay respect to the dead. On this day, the Chinese regime quietly opened the grave of former Chinese Communist Party (CCP) Chairman Mao Zedong’s wife Jiang Qing, but blocked that of former General Secretary Zhao Ziyang, who stepped down because of his opposition to the 1989 Tiananmen Square Massacre. This opening of one and closing of another released an important political signal.

On April 4, Chinese writer Gao Falin tweeted: “At this moment, it is the morning of April 4 in China. I received a post: Tomb-sweeping Day today. Strange things in Beijing—there are many people paying homage to Jiang Qing. The passage to Ziyang’s grave has been guarded and no one is allowed to approach it.”

The next day, Cai Xia, a former professor of the Communist Party School currently in exile in the United States, reposted this tweet and explained: “People are not allowed to pay homage to the grave of Zhao Ziyang, and the grave of Jiang Qing is open to the public. This tells clearly who the CCP authorities admire and fear.”

Jiang Qing, formerly known as Li Yunhe, Mao Zedong’s last wife, was Mao’s vanguard in launching the Cultural Revolution. With her special status, Jiang Qing had been at the forefront since Mao launched the Cultural Revolution in 1966. She incited civil strife and persecuted dissidents. On many occasions, she played the role of Mao’s spokesperson.

After Mao’s death in 1976, Jiang Qing was arrested as a member of the Gang of Four and sentenced to death with a suspended sentence. In 1991, she committed suicide in Beijing Qincheng Prison. Since then, “Jiang Qing” has been taboo for the CCP.

Since the era of Deng Xiaoping, the CCP has held a negative attitude toward the Cultural Revolution. People have not been allowed to visit Jiang Qing’s tomb. Now the CCP has opened the site Jiang Qing’s grave to the public, which is considered to be a strong signal that Xi Jinping will return to the Mao era.

Jiang Qing was also an important promoter of revolutionary operas during the Cultural Revolution. Revolutionary operas, or model operas, are “reformed” traditional Chinese Peking operas with modern musical elements. The contents were all “red” plays that promote the CCP. In that era, all traditional Chinese operas were forbidden. Jiang Qing used model operas to change traditional art and made it a weapon for persecuting dissidents.

In July this year, the CCP’s theatrical performances celebrating the centenary of the founding of the party will once again stage those red model operas. In this regard, NTD current affairs commentator Tang Jingyuan believes that Xi Jinping is launching a soft cultural revolution. He said, “Xi’s promotion of the model operas marks that he has launched a campaign to purge the ideological and literary circles from now until he completes his reelection.”

Zhao Ziyang, one of the general secretaries of the CCP in Deng Xiaoping’s era, was an important promoter of political reforms. Because his proposals were different from Deng’s economic reforms, Deng called him a liberal and refused to accept him.

During the 1989 student movement, Zhao was ousted because he sympathized with the students, opposed repression, and exposed his conflict with Deng to the international community. Zhao was placed under house arrest until his death in 2005. After Zhao’s death, his ashes were kept at his Beijing residence until his families were allowed to bury him with his wife on Oct. 18, 2019. His wife, Liang Boqi, died in 2013.

Because Zhao Ziyang’s reform proposals won the hearts of the people, a large number of people go to Zhao’s former residence to mourn each year on the anniversary of his death. It is considered a sensitive time, and the CCP always sends a large number of police officers to block the road. In this regard, Li Yanming, a current affairs commentator on the China issue in the United States, believes that Zhao represents public opinion to a certain extent and poses a threat to the CCP.

According to a tweet by Chinese independent journalist Gao Yu, the CCP has notified Zhao’s family to move out of his Beijing residence. Gao Yu posted relevant pictures on Twitter and left a message saying: “Today is Ching Ming, packed boxes are in every room of this residence which Ziyang’s family has been using for 32 years. Is this the last Ching Ming in this courtyard?”

Xi Returns to the Mao System for Centralization

Xi is the second party leader since Mao Zedong to hold the power of the party, government, and military. In 2017, in the 19th National Congress of the Communist Party of China, “Xi Jinping Thought on Socialism with Chinese Characteristics for a New Era” was written into the party constitution, making Xi the second party leader with an ideological system in the history of the CCP. He was dubbed “Xi Zedong.”

Chen Daoyin, a Shanghai-based political scholar, believes that although Xi Jinping Thought was written into the party constitution, the long qualifier shows that his actual power has not reached the height of Mao’s.

Li Yanming indicated that if Xi Jinping wants to completely retain power, in addition to continuously attacking opposition forces in the party through his campaign of anti-corruption, he must also firmly control the nation’s ideology, and Mao Zedong’s high-handed and centralized rule is the best model.

In this regard, Li Yanming commented: “Xi Jinping must abandon Deng Xiaoping’s reform ideas if he wants to return to the Mao era. Economic development will help the CCP gain support from the people, but the CCP must not make political concessions. Borrowing what Xi said at the end of 2018, it is, ‘We must resolutely reform what should and can be changed, we must resolutely not reform what shouldn’t and can’t be changed.’”

In fact, Xi Jinping’s plan to return to the Mao era is already in progress. For example, on Sept. 15 2020, the General Office of the Central Committee of the CCP issued “Opinions on Strengthening the United Front Work of the Private Economy in the New Era,” requiring private enterprises to always be “politically sensible,” encouraging private enterprises to participate in “mixed ownership reforms,” accept the united front, and actively participate in major strategies, including participation in the Belt and Road initiative.

As early as Sept. 20, 2019, the officials of Hangzhou, where large Chinese companies gathered, announced that they would deploy 100 government officials to 100 companies including Alibaba, Hikvision Digital Tech, Geely Auto, and Wahaha Group. They would become the first batch of Government Affairs Representatives in 100 key companies.

Although Xi Jinping has adopted various methods to prepare for a full return to the Mao era, whether he can be reelected at the 20th National Congress of the CCP next year is still a big question. NTD’s current affairs commentator Tang Jingyuan believes that if Xi wants to completely abolish Deng Xiaoping’s line, it is tantamount to cutting off the idea of “taking turns to be the leader” of the powerful families of the CCP. What’s facing him will be a frantic counterattack from many political opponents.