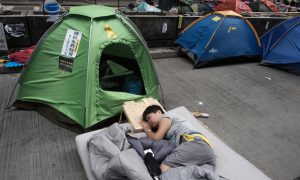 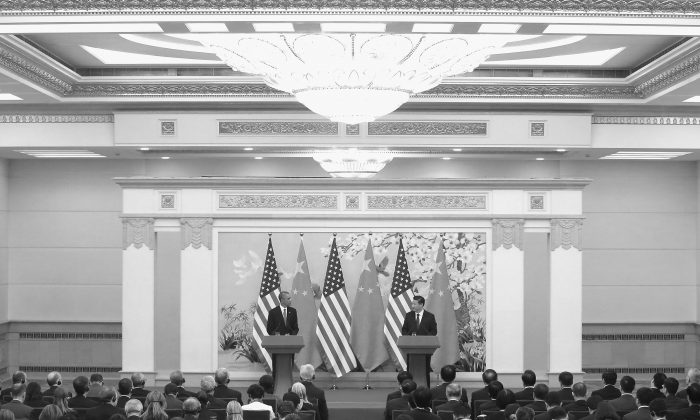 HONG KONG—Xi Jinping, the leader of the Chinese Communist Party, has for the last six weeks been relatively quiet about the pro-democracy students and activists that have flooded streets in Hong Kong, calling for free and open elections.

He departed from that quiet on Wednesday, saying that the occupy movement in Hong Kong is an “illegal incident.”

“We resolutely support the government of the Special Administrative Region dealing with the matter according to law, protecting Hong Kong’s social stability, and safeguarding the safety of the Hong Kong people and their property,” he said in a joint press conference with President Barack Obama, held after the APEC meetings in Beijing on Nov. 12.

“During our meeting, I expressed to President Obama that Hong Kong’s occupy movement is an illegal incident,” he said.

Obama also had a chance to speak about Hong Kong during the press conference, and made the remark that “I was unequivocal in saying to President Xi that the United States had no involvement in fostering the protests that took place there.”

He added that “These issues are ultimately for the people of Hong Kong and people of China to decide.”

However, Obama said that the United States will continue to defend the right for people to express themselves, and hoped that Hong Kong’s elections are “transparent and fair and reflective of the opinion of the people there.”

Speculation has been rife in Hong Kong and in the press over the last few days that the police would begin clearing protesters off some, or perhaps all, of the roads they have occupied. These include major arteries that pass near to the government headquarters, and Nathan Road, the main thoroughfare that runs through Mong Kok, a bustling shopping area.

Xi’s remarks were neither conciliatory nor particularly hard line, and indicated, again, that the central government would not be stepping in to directly take charge of affairs in Hong Kong and violently end the protest movement.

Xi also said the business interests of Chinese and international companies and personnel in Hong Kong should be protected, and that law and order, and public safety, in Hong Kong must be maintained. The reference to public safety could be read to indicate that a violent crackdown is unlikely.

The occupation, which calls itself the Umbrella Movement (or “Revolution,” according to some activists), has been compared to the Tiananmen Square student protests of 1989, and is seen in some quarters as the most serious and open challenge to Communist Party legitimacy since then.

Communist Party propaganda often emphasizes how the regime, which is not elected, rules China legitimately because it is the sole organization suited to do so. Party leaders are thus extremely sensitive about criticism, particularly from foreign governments, of the Party’s treatment or abuse of the Chinese people, and their denial of rights, such as freedom of expression, that are enjoyed elsewhere.

“Hong Kong affairs are entirely in the realm of China’s internal politics,” Xi Jinping said. “Foreign countries should by no means interfere.”

A decision by the Hong Kong High Court on Nov. 10, two days before the Obama-Xi press conference, has occasioned discussion in Hong Kong about the relevance of the rule of law to the conduct of the pro-democracy protesters.

The court reaffirmed previous orders that the police were empowered to remove the pro-democracy protesters from their encampments on the city’s streets.

At a press conference on Nov. 11 responding to the court decision, Alan Leong Kah-kit, member of the Hong Kong Legislative Council, leader of the Civic Party, and a senior lawyer said: “The rule of law is to use law to act justly, and to love mercy. Of course, if the court has already issued an order, the order should be respected, and people who are influenced should obey the order. But, I want to point out again: if the rule of law is simply that the government makes the law and citizens abide the law, the law will become a tool for domination.”

Hong Kong Legislative Council member and lawyer Albert Ho Chun-yan said at the press conference: “The government has the greatest responsibility for undermining the rule of law, because the government has no will and no law enforcement with [legitimate] authority. The underlying reason is clear: the whole system of governance makes people feel that it can’t go on.”