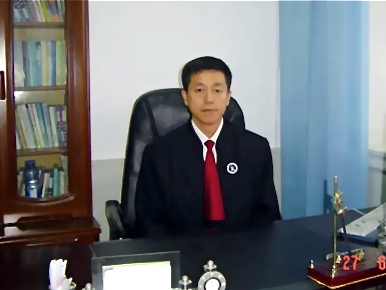 Wei Liangyue, shown in a photo before his illegal abduction and detention by the Chinese authorities (Photo provided by a source in China)
China

Wei Liangyue is an influential Chinese lawyer who has fervently fought many legal battles for victims of the Chinese regime, including Falun Gong practitioners and those being illegally detained by the authorities. On May 25, Wei was abducted by police and has not been seen by his family since. This article details the injustice and hardships that Wei has suffered at the hands of the Chinese regime since 2008, because he has continued to fight against their unjust deeds.

Wei Liangyue is among China’s first generation of lawyers, having practiced law since 1988, and is considered to be a very influential figure in China. He has passionately defended many disadvantaged groups over many years, including victims of illegal detention and cases involving Falun Gong practitioners.

In 2009, during the annual inspection of lawyers’ licenses, the Heilongjiang Provincial Department of Justice—under orders from the 610 Office—threatened not to renew the licenses of the other lawyers in Wei’s law firm if he did not resign his position as director. Wei had no choice but to resign.

On May 25, 2012, Wei called his wife and told her he was abducted by 20 police officers from the National Security Division in Nangang District, Harbin City and was going to be sent to a reeducation camp for issues related to Falun Gong.

Wei did not tell his wife where the camp was located so she enlisted the help of three attorneys and desperately searched for her husband’s whereabouts at various government departments. The police finally sent a notice to Wei’s family two days later stating that Wei had been handed over to the 610 Office in Nangang District.

Wei’s detention did not follow any known legal procedures. Later, an official of the 610 Office, named Zhang, spoke to Du and confirmed that Wei was in a reeducation camp but said that he could not tell her any further details. According to Du, the official told her, “In the name of the government, we will ensure your husband’s safety.”

Du told The Epoch Times, “I was told that the district secretary accompanied my husband 24 hours a day and took good care of him. They lived in a room with two beds under very good conditions. I requested the police to follow legal procedures, but they said the orders from their superiors followed no legal procedures. Obviously, they would have no legal procedures for something that is illegal. They told me that my husband’s return would depend on the progress of his ‘reeducation’.”

Under significant public pressure and following repeated requests from Wei’s family members, the police finally allowed Wei to make a phone call to his mother on the evening of June 5. Du said, “He called my mother-in-law, but no caller’s phone number was shown. My husband told his mother, ‘I did not break any law. I am all right. Don’t worry, Mom. Don’t cry.’ Perhaps it was because he was under surveillance, but he did not tell us his whereabouts, nor did he know when he could come back. But I still hope that my husband will return as soon as possible.”