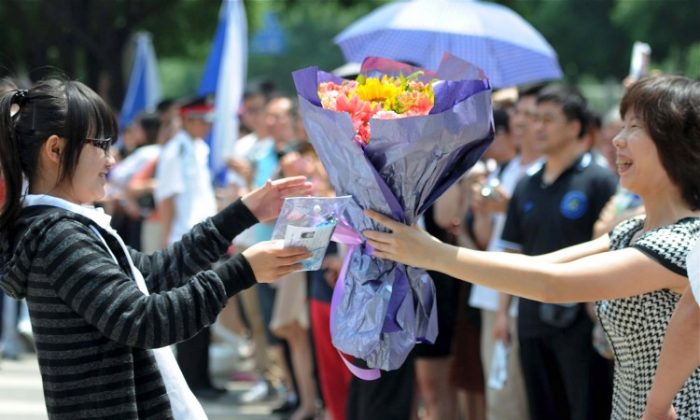 A mother greets her daughter who finished the first day of difficult college entrance exams, or "gaokao," in Beijing. Current policies make it more difficult for students born in rural provinces to enter prominent universities, even if their parents work and live in an urban area. (STR/AFP/GettyImages)
China

Imagine that you were born in Nebraska and your parents moved to New York City when you were young. At age 18, it’s time for the national test to enter university. But unlike your friends who grew up in New York, you have to travel back to Nebraska to take the test—and because of that you’ll need a much higher grade to get into a top university.

Chinese society thus is strictly divided into rural and urban by a system called hukou, or household registration, and it extends across generational lines.

Eight lawyers across China recently submitted a joint letter challenging a key part of the system, urging the Chinese Ministry of Education to change what they described as its discriminatory policies which limit students living in rural provinces from opportunities to attend top universities.

Since China adopted economic reform in the 1980s, a large number of low skill jobs have been created in urban areas. Now approximately 220 million farmers, constituting nearly one-sixth of China’s entire population, have migrated into urban areas but do not receive any of the social benefits that those with urban hukous receive, even though they live there.

A result of this policy is that the Ministry of Education does not permit children of migrant workers to take the college entrance exams, or gaokao, in the cities.

Although the lawyers demanded that the Ministry abandon its two-tiered gaokao policies, the core problem lies in discrimination by universities. Top universities in cities like Beijing and Shanghai admit a significantly smaller quota of students from rural provinces like Shandong, Sichuan, Henan, and Hebei, according to China News Service.

Chang Boyang, a lawyer from Henan Province who is one of the leaders in this movement told China News Service: “Many acclaimed universities in Beijing have admission policies that discriminate against students from certain areas in the country. It has also been common for prestigious universities in other cities to have similar admission policies.”

Xiong Wei, director of a legislative research center in Beijing, commented on Sina Weibo, a popular Twitter-like service in China, that parents are increasingly angered by the government’s failure to amend the law, while their children’s lives are “destroyed.” He writes: “Many parents are going crazy, calling, appealing, and protesting, and they are not even afraid of the police suppression.”

Wang Peng, a prominent civil rights lawyer, agrees that the regime has not moved to fix the issue and the hukou system has affected children across China. He wrote on his Weibo page: “I want to ask: will these children love their country? What reason do they have to love their country? Some leaders exploit laborers’ low wages, enjoy their taxes, and at the same time discriminate against their children. This is creating a seed of tomorrow’s social conflict!”