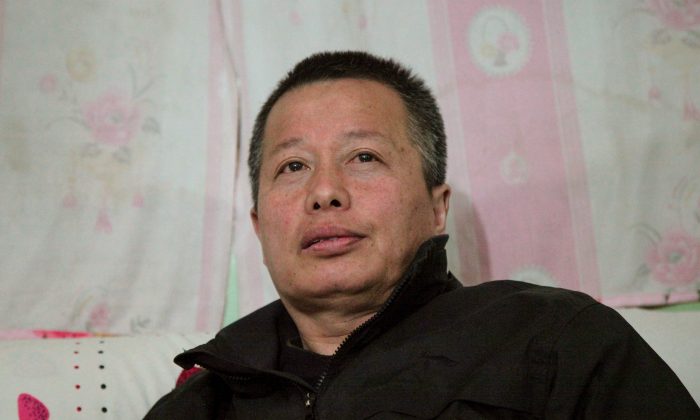 The Chinese human rights lawyer Gao Zhisheng, still under the watchful eye of Chinese security forces in a remote part of China, has penned a letter announcing that he has smuggled two book manuscripts from China that will be published next year.

Gao also wrote, somewhat nebulously, about an attempt to put the Chinese Communist Party on trial for crimes against humanity toward the end of 2017. The details of what he termed the “special tribunal” are unclear, and in the letter he directed readers to the forthcoming books.

Gao was one of China’s most promising lawyers, according to a Ministry of Justice award in 2001. But when he began taking on sensitive political cases, in particular those of practitioners of Falun Gong who had been persecuted and tortured by Party security forces, Gao himself became a target and had his career, then body, ruined.

After traveling to various parts of China to conduct his own study of the persecution of the practice—a traditional discipline of self-cultivation that involves meditative exercises and moral teachings—Gao wrote three open letters to the leadership of the Communist Party, condemning the campaign against Falun Gong.

The practice has been persecuted since 1999, under the orders of then-Party leader Jiang Zemin, who took the campaign as a personal crusade.

Gao openly renounced his Communist Party membership, and participated in a nationwide hunger strike. After his law firm was shut down and his license to practice law was canceled, and he still did not cease his advocacy on behalf of persecuted Falun Gong adherents, Gao was directly targeted by security forces.

The righteous fury and literary flair of Gao’s new open letter belies what had previously been thought of his condition.

“Don’t you talk about torture by the Communist Party yet, because we will give you a comprehensive lesson now!” Gao reports one of his tormentors saying, during a nearly two-month stint in custody. “You are correct, we torture Falun Gong. Everything is right. The 12 courses we’re going to give to you were practiced on the Falun Gong, to tell you the truth.”

During that 2007 episode, Gao had cigarettes held to his eyes, toothpicks inserted into his genitals, and his face beaten with high-voltage electric batons.

After a brief release he was taken back into custody, where he remained until a year ago. He was detained and tortured in military bunkers and black sites used by the secretive internal security bureau, before being formally sent to jail for three years. Experts widely considered the charges—violating the terms of his probation from an earlier sentence for his legal activism—to be made up.

Since his release in August 2014 Gao has been under house arrest in the far western province of Xinjiang. His wife, Geng He, and their two children fled China in 2009 and live in California. The recent letter is the most that has been heard from Gao since his release.

Its righteous fury and literary flair, typical of his previous writings, belies what had previously been thought of his condition: an old dissident, mentally and physically broken, bereft of the will to continue challenging the Chinese Communist Party—or as he prefers to call them, the “gang of bandits.”

With reporting by Gao Ling.

Yesterday, when I was looking through the old cabinet my mother left, I came across the book “Lawyer Gao Zhisheng’s Collected Works.” I sat down and read in one sitting the three letters I wrote to the Chinese communist bandit leaders. Only after having gone through the same torturous experience myself do I now know how catastrophic, deeply disturbing, and shocking it is.

Wei Xiuling, a Falun Gong practitioner from Shandong Province, was “killed,” resuscitated, and then finally killed again. Reading her story again, the misery is simply suffocating. Reading how her lower half was naked when she died, I start quaking again in my heart. Or the story of how when Liu Boyang and his mother Wang Shouhui from Changchun were both tortured to death, they could hear each other’s blood-curdling cries.

It’s been a decade since I wrote these investigation notes, but the murderers are still “leading comrades,” still strutting around with their heads high and their bellies out, long having forgotten about the bloody debt that will follow them forever. This is the achievement of China Central Television, Global Times, Liberation Army Daily, and other wicked media have wrought, going about their shameful work numbing the Chinese people. The words I wrote to Hu Jintao and Wen Jiabao in the end failed to awaken the numbed souls of this world, and the sinister regime continues its crafty, evil conduct, the same as it always has.

Right around me there are still shameless agents of the regime, hanging about day and night, earnestly carrying out the wishes of their master of forever keeping China in a dark, intoxicating dream. This is what United Nations General-Secretary Ban Ki-moon, who attended the Party’s military parade recently, doesn’t see, and doesn’t want to see.

Ban Ki-moon, Russian leader Vladimir Putin, and Korean leader Park Geun-hye are like visitors from other planets, turning a deaf ear to the human rights disaster in China going on around them. They don’t react in the least when the thugs who invited them carry out a brutal crackdown on expression, thought, freedom of belief, or when they thwart constitutional development, education reform, health reform, judicial independence, or derail attempts to spread universal civilized values. Their numbness to all this should be exposed.

This is all a disgrace to the civilized world.
— Gao Zhisheng, Chinese human rights lawyer

The dark, criminal elements of the Communist Party have sprung forth again around China, disappearing, torturing, and extracting confessions from hundreds of human rights lawyers. The campaign is another open crime against humanity, another evil for the historical record, just like the Tiananmen June 4 massacre, or the persecution of Falun Gong, or the brutal, continuous practice of demolishing the homes of ordinary people and evicting them.

This is all a disgrace to the civilized world. I don’t know what Ban Ki-moon is thinking inside when he does business with these people who blatantly commit crimes against humanity. During the military parade of this gang of bandits, petitioners and dissidents around the country were suppressed and put under strict control; restaurants in Beijing demanded to see their diners’ identification cards; 10 days before the parade, the post office ceased all package deliveries. All of this was done to make a Potemkin Village for the likes of Ban Ki-moon, to give the gang of scoundrels with guilty consciences a chance to congratulate each other.

I can now make public that in mid-August I successfully delivered overseas two manuscripts: One is titled “China Stands Up in 2017”; the other is not yet named—both will be available within a year. There is much worth reading in those books, so I won’t say more about them today.

I want to solemnly assure you all that all the crimes against humanity taking place in China today will without exception be judged. At the end of 2017, a special tribunal will be set up for this—the details of this are described in the forthcoming books.

After reading the three open letters, I felt the natural urge to pen the above notes to memorialize the noble martyrs who have passed away—they’re the glory and the last energy of our nation, evidence that our people still have promise and grandeur. Commemorating their lives is proof that our consciences have not been entirely destroyed.