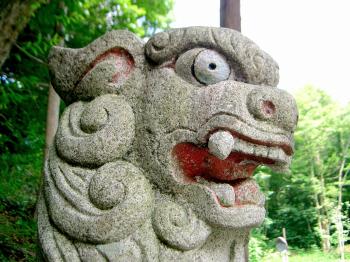 POET'S MEAL? The consumption of ten stone lions seems like a ridiculous subject for a poem, but this work has a linguistic, rather than semantic goal. (Public domain source)
China

The Lion-Eating Poet in the Stone Den

The Chinese language. This ancient linguistic heritage has a rich and diverse tonal expression that makes it quite different than the languages of the West. Including Mandarin, Cantonese and other dialects, more than a billion people speak some derivation of this time-honored tongue.

As in all tonal languages, in Chinese one syllable can be pronounced in several distinct ways, with each pronunciation having radically different meanings. While this aspect can be confusing for those new to this form of expression, for individuals who have mastered it, Chinese presents linguistic possibilities unachievable in other languages, offering an unparalleled opportunity for articulation.
Consider a poem written by Chinese linguist Yuen Ren Chao that describes the bizarre tale of a lion-eating poet. Yuen’s homophonic masterwork performs a most impressive manipulation of tonal gymnastics, revealing a story that—if reproduced phonetically with English letters—would only require the constant repetition of a single word: shi.

Although the perversion of the Chinese language over the years may create a bit of incoherence in the reading of the poem, any moderately-trained reader can still easily enjoy its ingenuity.

In a stone den was a poet named Shi, who loved to eat lions, and had resolved to eat ten.
He often went to the market to hunt for lions.
At exactly ten o’clock, ten lions had just arrived at the market.
At that moment, Shi had just arrived at the market too.
Seeing those lions, he shot them with his arrows.
He brought the corpses of the ten lions to the stone den.
The stone den was damp, so he had his servant clean it.
After the stone den was cleaned, he tried to eat those ten lions.
When he ate, he realized the corpses were in fact ten stone lions.
Try to explain this matter.

Using 92 Chinese characters, this poem seems innocent enough, save for the strange narrative it conveys:

While the ideas expressed in this poem are ridiculous at best, Westerners can most appreciate this work when it is produced in Pinyin, a form of Romanized writing where every character is converted into one syllable and where every tone is expressed by using four distinct accents used by the Chinese language and its derivatives:

Almost like a game, “The Lion Eating Poet in the Stone Den” manages to describe the complete tale of a daring writer, using only the word “shi.” Yet how could merely four tones of one word produce such a complete narrative?

A language like English, of course, has homophones too (words that sound alike but have different meanings)—like “flower” and “flour,” “meet” and “meat.” But sounds are limited to at most two or three concepts. In Mandarin Chinese, a falling, rising, dipping or even tone can vastly change the meaning of a spoken syllable. Add the variable of context into the mix, and the possible meanings for a single syllable becomes disturbingly vast.

Within the poem, concepts such as “stone”, “eat”, “ten”, “promise” and “time” have the same tone of pronunciation, while others like “lair” or “story”, are in a different tone. However, the poem loses its original pronunciation if the written characters are read in dialects other than Mandarin, such as Cantonese, Taiwanese or Hakka.

Tonal languages can be found all over the world, and some have even greater tonal variations than those found in Chinese. The apparent confusion caused by the repetition of the same syllable over and over again disappears when one considers that in the mother tongue of the Orient, the context within each phrase says a lot about the meaning itself.

You can find the enunciation of the complete poem at http://videodownloader.net/especial/shi.mp3. If it doesn’t elicit surprise, then this phonetic rarity should be capable, at least, of producing a smile.