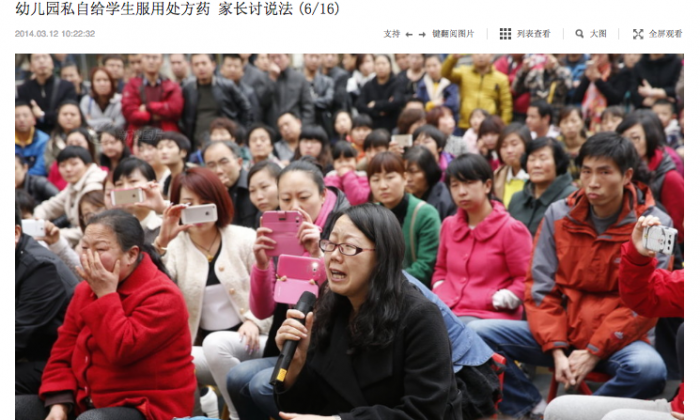 A parent explains the symptoms his child suffered, during a meeting on March 11 hosted by the Xi'an City government staff in charge of the investigation of two local kindergartens. (Screenshot/Sina.com)
China

Chinese Kindergartners Force Fed Drugs to Keep Them in School

Two exclusive kindergartens in China struck upon a bold idea to boost their businesses a few years ago: feed medication to the children to prevent them from getting sick, which will increase their attendance. More days in school means more pay for the kindergartens.

At least that’s what parents of the children have recently concluded, after being puzzled at reports that their children were being fed drugs they didn’t understand. At no point were parents informed, they say.

They became aware of what was going on when the plan backfired, and the children began coming home with constipation, sweating, vaginal discharges, swollen genitals, leg pains, and dizziness.

In protest, hundreds of furious parents blocked the roads in front of the two kindergartens—the Fengyun Kindergarten and the Hongji New City Kindergarten—in Xi’an City of Shaanxi Province on March 11 and 12.

Both facilities belong to the Shaanxi Soong Ching Ling Foundation, a welfare organization, according to the state-run Beijing News.

The kindergartens were reported to have systematically provided to the children doses of Moroxydine Hydrochloride, an antiviral prescriptive medicine produced in China, Beijing News says. There are more than 1,400 children in the two schools, most of them aged between two and six.

The administering of drugs took place several times a week, parents said, and persisted for at least three years.

“The medicine makes you comfortable,” “it’s nutritious,” and “you’ll never get sick after eating this medicine,” the teachers would say.

A daughter once told her mother that she’ll never get a cold because “we ate medicine that protects us from cold.”

After being bailed up by angry parents, the principal of Fengyun Kindergarten, Zhao Baoying, said that he fed the children drugs to prevent viral influenza and ensure attendance, according to the Xinmin Weekly. He only did it for a three months, he pleaded.

The kindergartens refused to publish the full medication records though.

Police were on March 12 said to be looking into the matter.

One Mr. Wang, a representative of the parents, said they found two receipts, one which showed an order of 10,000 pills of Moroxydine Hydrochloride in March of this year. But couldn’t find the pills, leading to the suspicion that they’d already been consumed by the kindergartners.

Parents pay around 1,130 yuan ($184) a month, which is considered expensive for the area, for the privilege of sending their children to these private kindergartens. Mr. Wang’s monthly income, for example, is less than 3,000 per month, he told Xinmin Weekly.

If a child is absent for a day, then the money for that day is returned; half a months’ tuition is returned if the child misses more than 10 days in any month.

The Moroxydine Hydrochloride tablets are cheap: only 1.5 yuan (25 cents) for a bottle of 100. Children only need a tenth of a pill per dose. The local Children’s Hospital in Xi’an stopped using the drug, though, because of the side effects, and because it was clinically unproven, according to Xinming Weekly.

Parents said they were outraged by the idea that the schools had drugged their children with this sort of medication to make money.

“No matter whether the children were healthy or not, they were forced to take the medicine,” Mr. Wang said. “When the children took sick leave, the kindergarten was very worried and called to ask what illnesses and symptoms they had.”

He added that originally, “we parents were moved by the kindergarten’s care for the kids.”

After the drug revelations, though: “Now when we think about it, it’s not normal.”

The two kindergartens are both run by the Shaanxi-based Soong Ching Ling foundation, a private non-profit welfare institution that says it aims to improve education and health outcomes for youth.

The foundation, named after the second wife of Sun Yat-sen, the revolutionary, has branches around China. Its leaders are often retired high-level Chinese Communist Party officials.

This is not the first scandal related to the foundation. The branch in Henan Province had previously used donations from the public for business use, including real estate speculation and loan-sharking, according the Southern Metropolis Daily in September 2011.

“In China, welfare is just business, the most profitable business!” wroter Zhou Xiaoyun, a reporter at Southern Metropolis Daily, in his blog on March 13.

“This is the sad current situation of China’s welfare. The Shaanxi Soong Ching Ling Foundation seriously breached its duty. It’s only a microcosm of China’s public welfare chaos!”