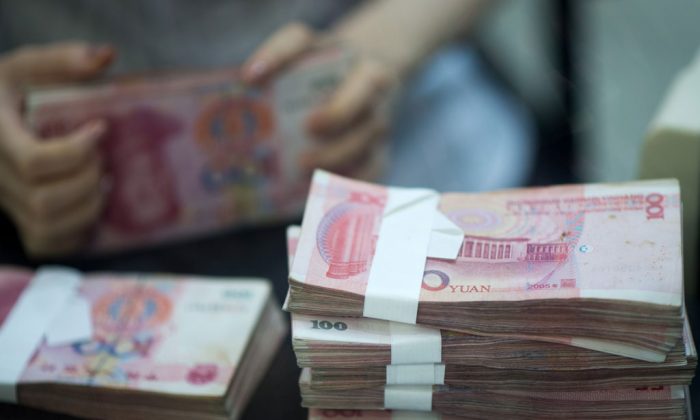 In this file photo, a worker counts currency in a bank in Shanghai, China. There have been a string of failures by private lending firms in China, leaving those who had invested their savings in the companies protesting to get their money back. (Johannes Eisele/AFP/Getty Images)
China

Private lending firms in China have been going bankrupt one after another. The bankruptcies have prompted mass protests by thousands of people who have lost their savings or are now victims of fraud. Many of the firms had been taking advantage of lax or ineffective government regulations to siphon off the cash.

On Jan. 11, several thousand people gathered in Xi’an, capital of western China’s Shaanxi Province, to protest their losses at the hands of the lending companies. Hundreds of police, backed up with dozens of vehicles, monitored them.

“I heard the money ended up in America. It’ll be very difficult to get it back.”
— Ms. Li, Investor in Da Ren Financial Consulting Company

Bad investments and the general downturn of the Chinese economy have made it impossible for many to collect interest, or in some cases even to retrieve their principal, according to media reports in mainland China.

Managers, seeing the writing on the wall, have made off with whatever funds they could pilfer from their drying-up businesses. Of around 260 lending firms registered in Shaanxi Province, 60 have been implicated in fraud

“There are many small-scale investment firms that offer monthly interest rates of 2 percent [24 percent annually]. After receiving money from investors, the firm reinvests it in other industries. Because those industries are also going under, everyone is definitely quite worried,” Han said.

The protesters, mostly those who had employed the services of the now-bankrupt companies, held up signage emblazoned with slogans such as “Severe punishment for fraud, return our hard-earned cash” or “Arrest runway managers, return the money to the people.”

Protesters called for the firms to be put under official investigation.

“All the money has dried up,” Zhu told NTD Television. “Whether or not it can be salvaged will be announced at a press conference within the next two days. You’ll find out then.”

According to mainland Chinese reports, dozens of Shaanxi’s private lending firms were unable to fulfill their interest payments, and 20 investment firms went bankrupt, bringing customers losses of about 1 billion yuan.

The lending crunch in Shaanxi is only a cross-section of a situation that has been unfolding through China since last year. According to previous Epoch Times reports, the Chinese private lending industry boomed in 2013, with over 4000 financial firms set up in Sichuan Province alone. Many firms then went bankrupt starting in mid-2014. And it’s only picking up speed.

Finance and investment companies in Suining City, Sichuan Province are among those that suffered recent downturns. According to reports, some went bankrupt while the managers of others cut their losses and fled.

The customers who placed their trust in those firms reacted strongly. On Dec. 26, a mob of disgruntled investors in Suining blocked off a bridge and a critical avenue in the city center. Police arrested several people and cleared the area, but protesters regrouped and marched at the offices of city authorities.

Ms. Li, who had invested in the poorly functioning Da Ren Financial Consulting Company, was one of the protestors. She said the firm had ignored its customers, which led to the protests.

“We gathered to block off traffic on the roads and bridges,” Li told an Epoch Times reporter. “We want the government to step in and mediate. We investors were very emotional, and police arrested three people. We demand that the government release them.”

Two city officials came to mediate, Ms. Li said. “We went to the city government, and the officials told us that Da Ren was ‘in the middle of cleaning up its assets’ and that we should wait for their response. They didn’t promise anything though.”

The same day, over a thousand Suining residents besieged the offices of Da Ren to demand compensation. “Over there it was just chaos. Everybody was worked up and got into fights with the employees,” Ms. Li said.

According to Li, matters were “very troublesome” with disputes involving another finance company, Huishenghang, which had held about 10 billion yuan (1.6 billion dollars) of its clients’ savings.

“I heard the money ended up in America,” Li said. “It’ll be very difficult to get it back.”