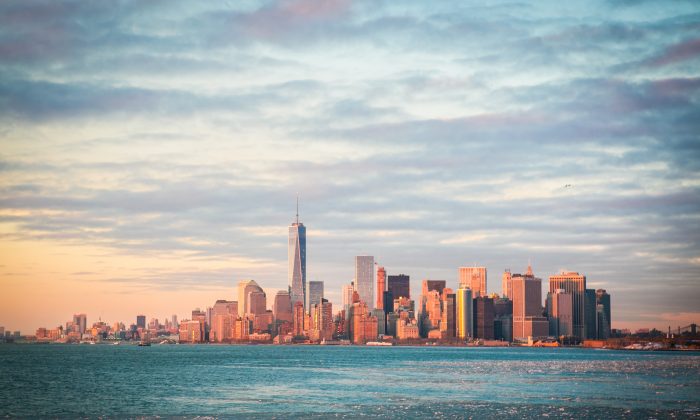 The One World Trade Center towers over the other buildings of the Manhattan skyline viewed from the New York Harbor during sunset on Feb. 10, 2015. (Benjamin Chasteen/Epoch Times)
Business & Economy

New York in particular has become a favorite place for Chinese investors to stash their cash.

“We are at the beginning of a very exciting period in our relationship between Chinese buyers, real estate agents, and developers in New York City,” said Shaun Osher, CEO of CORE, Manhattan’s leading real estate broker.

Chinese homebuyers in the past had chosen urban West Coast areas, such as Los Angeles, San Francisco, and Seattle, because of a strong Hong Kong ex-pat population. Now they are moving to the East Coast and Texas, according to the Asian Real Estate Association of America (AREAA).

“New York is a safe haven. There is an opportunity to expand your wealth here. You can look at all the trends historically from September 11 to the financial recession. Investors know, over time, we have sustained their assets and the values have continued to expand,” said Forbes at a Nov.2 AREAA conference.

“The numbers are staggering,” said Nikki Field, broker and global adviser at Sotheby’s. “New York is a luxury brand. People started hearing and learning that there were great opportunities here, particularly for wealth preservation. You sell your property when you want and at the price you want.”

Chinese investors bought $28.6 billion in American residences last year, according to National Association of Realtors (NAR). They are No. 1, accounting for 28 percent of all foreign purchases.

The homes they acquired tended to be on the luxury side; the average house in the United States sold for $255,600, but Chinese buyers spent on average $831,800 for their American homes.

Although Chinese enjoy high returns in the New York real estate market, they are long-term buyers and prefer to keep their properties, said Field.

So far, the top properties for Chinese investors in the United States have been hotels and office spaces, as well as luxury residential.

There are multiple reasons for Chinese nationals to move to the United States. Some want to get their money out of China because of increasing anti-corruption probes. Five years ago the main motive was fear of the future.

“There was the fear of the unknown in China. They wanted to get out for security and safety,” said Michael Kercheval, president and CEO emeritus of International Council of Shopping Centers.

Today, said Kercheval, more are “also looking for quality of life, quality of air, as well as diversification of investments.”

To expand its political and economic influence abroad, China relaxed guidelines on outbound investment for institutional investors. Many affluent Chinese have taken advantage of this and diverted their wealth away from China to politically stable countries like the United Kingdom, the United States, and Australia.

With the stock market crash in China that began in June 2015, Chinese investments in the U.S. residential real estate market have soared. And New York has gained the lion’s share in recent months.

Higher education is the main driver for Chinese investment in New York real estate, according to Diane Ramirez, CEO of Halstead Property. Many parents buy properties around universities for their children.

In addition to housing, Chinese investors are also looking for commercial estate in areas that are attractive to Chinese immigrants. So they chase properties like shopping centers and golf courses in the areas where other Asian immigrants live, said Ramirez.

Flushing, the commercial center of Queens in New York City and the most popular destination for Asian immigrants, has become very popular for both residential and commercial real estate buyers.

“Although prices in Flushing are lower than Manhattan and Brooklyn, they are still expensive by historical standards,” according to Michael Meyer, president of F&T Group.

Meyer’s company is working on a billion dollar project in Flushing with Rockefeller Group. The project includes luxury residential and office condominiums. “The trend is all of Flushing will start to come up. I think there will be more developments for residential as well as hotels because of that,” said Meyer.

For the near future, experts do not foresee a significant price drop in the New York real estate market. Especially for the lower end properties, the scarce inventory will continue to drive up the prices.

One of the challenges that all buyers face in New York City is the scarcity of inventory. Around 62 percent of the market is rental and the majority of the properties for sale is co-op. “There are very few condos available for sale in New York City, so one needs to make a quick decision when buying a property,” said Shaun Osher.

New York City is the top residential market in the world and many international buyers are competing for the limited supply, said Osher.

Another challenge for property buyers is a shortage of good schools in the city. “We do not have enough great schools,” said Forbes.

So there is a development opportunity for that. Developers are buying air rights of pre-existing schools and building brand new schools. “That is a big trend happening in New York City and we will see that for the next decade,” said Forbes.