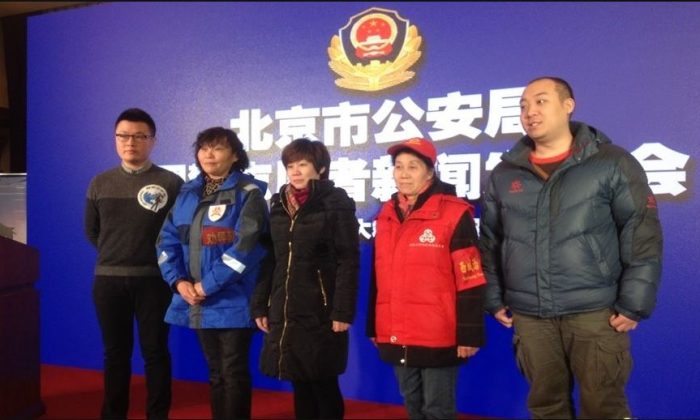 From left to right, representatives from a variety of Party-affiliated voluntary groups: the “Online Police Volunteers,” the “Fengtai Persuasion Team,” “Haidian Mobile Friends,” “Xicheng Moms” and “Chaoyang People” pose for a photo at a news conference at the Beijing Public Security Bureau on Jan. 13, 2016. (www.usachinapress.com)
China

In the name of “maintaining social security,” the Chinese regime spends billions of dollars to bolster its security apparatus every year. However, despite this exorbitant expenditure, the authorities in Beijing still don’t think its residents are adequately safe from supposedly dangerous ideologies.

Established in 2014, the 3,000-member strong Online Police Volunteers is comprised of mainly youngsters—80 percent were born after the 1980s—and people from all walks of life, according to People’s Net, the online version of state mouthpiece People’s Daily. Volunteers are responsible for scouring the Chinese Internet for “criminal leads,” assisting the police with Internet censorship and cybersecurity, and reporting Internet users who “spread rumors.”

Citizen volunteers serve as the Chinese Communist Party’s eyes and ears on the ground, monitoring and spying on their fellow citizens. Chinese Internet users and observers suggest that, far from stabilizing society, the presence of these informants only generates friction between the Chinese people and the communist regime.

Many Chinese Internet users reacted angrily to the unveiling of the Online Police Volunteers on Sina Weibo, a popular microblogging website.

The new volunteer security group “will soon themselves become the targets of social harmony and stability,” wrote Internet user “Adil—–” in a post. Other Internet users likened the group to “criminal accomplices,” “Nazi thugs,” and even “modern-day Red Guards.”

The Red Guards were impressionable Chinese youth in the 1960s mobilized by Mao Zedong to attack “counterrevolutionaries”—the Communist Party’s political enemies—and destroy traditional Chinese culture during the tumultuous decade of the Cultural Revolution.

The strong online reaction can in part be explained by a recently enacted Chinese legislation that targets the so-called “spreading of rumors.” As of Nov. 1, 2015, those found guilty of rumor mongering face up to seven years in prison.

The establishing of informant groups is an attempt by the Chinese authorities to get the “masses to struggle against each other,” said Xu Lin, a human rights activist from the southern Chinese city of Guangzhou, to international broadcaster Radio Free Asia (RFA). He adds that the Chinese authorities wouldn’t be able to effectively intimidate the millions of Chinese netizens with their relatively scant volunteer online citizen police.

But the mere presence of citizen informants definitely deepens the rift between the regime and the people, Chinese blogger Ye Du told RFA in an interview.

“It’s like having a sword of Damocles hanging overhead—anyone can be reported anytime.”