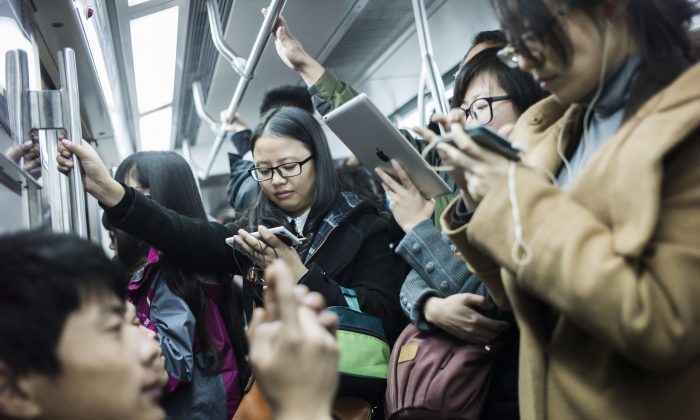 Commuters watch movies on their mobile phones and tablets in a metro car in Beijing, Nov. 17, 2014. (Fred Dufour/AFP/Getty Images)
China

Should Netflix stay out of the fray?
By Fan Yu

Beijing and Shanghai may lie almost 1,000 miles apart, but their metro riders share one thing in common. Each morning, commuters hunch over smartphones or tablets to watch the latest Chinese or Korean TV drama or Hollywood movies downloaded from the Internet.

Chances are, those videos are downloaded or streamed for free—via legal means or pirated.

But that may be set to change.

China’s online video market is expected to reach RMB 36.8 billion (US$5.8 billion) in 2015, a 50 percent increase from 2014, according to iResearch, a Chinese Internet consultancy. Around RMB 15.2 billion of that figure comes from online video advertising, with the remainder consisting of subscriptions and purchases.

While that’s seems high, online video is still a small portion of the RMB 209 billion (US$32.9 billion) Chinese Internet users expect to spend in overall online entertainment, which includes music and games.

This fragmented environment cemented China’s reputation as a market where copyrights go to die.

The gap is apparent when taken into context with how users spend their time online. As of June 2015, Chinese Internet users spent 33 percent of their time on the Web on online videos. That’s by far the biggest chunk of time spent on online entertainment activities—social networking was 10.6 percent, and online gaming was only 5.9 percent. The remainder was spent on nonentertainment online activities.

In other words, revenues from online videos aren’t commensurate with usage demand. China has more than 650 million Internet users, and monetizing the online video market has become an arms race among domestic Internet giants.

The question is, how to convince millions of Chinese Web users to pay for content?

Media and entertainment giants view China as the new frontier. And in many ways, it’s still akin to the Wild Wild West.

This fragmented, free-for-all environment encouraged the rampant piracy that has plagued the Chinese entertainment industry in recent decades, and cemented China’s reputation as a market where copyrights go to die.

There are new sheriffs in town. The impending culture shift is led by the “BAT,” China’s big three Internet giants of Baidu, Alibaba, and Tencent.

Their strategy is to create online platforms with libraries of high-quality and desirable content in high definition, able to be streamed or downloaded on-the-go. With a compelling product, they—and Hollywood studios—hope some users would move from illegal sites to these paid platforms. The services will be promoted alongside the Internet giants’ existing products—think Taobao, WeChat, and QQ—which already dominate the social lives of Chinese Internet users.

“The generation of users born post 1990 understands the value of content. They are cash-rich, but time-poor. They are willing to pay for the convenience of accessing quality without having to go through the complications of finding illegal content,” Yang Xianghua, senior VP of iQIYI, said in an interview with Variety magazine.

Alibaba, which runs e-retailer Taobao and its namesake Internet wholesaler website, is spending billions on this effort. On Nov. 6, Alibaba agreed to pay around US$4.4 billion to purchase the remaining stake of Youku Tudou it doesn’t already own. Youku—a Chinese cross between YouTube and Hulu—hosts a number of well-known video bloggers, has a huge user base, and can drive traffic to Alibaba’s more lucrative online video ventures.

One service standing to benefit is Tmall Box Office, a streaming service launched by Alibaba earlier this year. Similar to Netflix, it requires monthly or annual subscriptions and offers a mix of Chinese and foreign movies and TV shows. Payments (around US$6 for the monthly plan) can be conveniently made via—you guessed it—Alipay, the company’s online payment service.

Taking a page out of Netflix’s playbook, Alibaba is also turning itself into a movie studio. Hong Kong-based Alibaba Pictures was launched in March 2015 to produce Chinese-language TV shows and movies. It also invests in large-scale Hollywood productions—in June Alibaba signed a deal to invest an undisclosed amount in the next “Mission: Impossible” film. Last year the company obtained rights from Lionsgate to broadcast and stream movies such as “The Twilight Saga” and TV shows such as “Mad Men” and “Weeds” in China.

For Hollywood studios, China has long been a flawed market. Studios frequently face off against Beijing’s censorship police, which demands content alterations before release. Even after films are approved, box-office receipts are the only material form of revenues for studios. DVD and Blu-ray sales are virtually nonexistent due to rampant piracy.

To make up for this gap, U.S. studios see digital distribution as a potential new revenue stream in China. Timing will largely follow the U.S. distribution model. For example, MGM’s latest Bond film “Spectre” will be distributed online after its theatrical run, according to Tencent.

Competition among Chinese Internet giants is heating up just as Netflix mulls entering the market. The California-based streaming giant has contemplated a China expansion for years, but rumors are heating up recently. Last month, QQ.com reported that Netflix is nearing a deal with real estate developer Wang Jianlin’s Wanda Group to launch a China service.

Netflix will face intense pressures should it decide to enter China. Besides obvious competition from existing service providers, there will be a slew of regulatory and censorship issues to work through.

Few foreign businesses operate freely in China, especially in a politically sensitive sector such as media. The Communist Party has restrictive censorship guidelines in place, and Netflix would need to apply for dozens of licenses to operate in China. A large portion of Netflix’s existing library, especially past films, will be ineligible to be shown in China. The last Bond film, “Skyfall,” faced a two-month delay in its 2012 China theatrical release due to censorship issues.

Netflix also needs a local partner—reportedly Wanda Group—to gain a foothold, even with the necessary licenses and self-censorship in place. Portions of its revenues and technologies would likely be passed to its Chinese partner, putting at risk some of Netflix’s most closely guarded technologies such as the Cinematch prediction algorithm.

Beijing puts up operational and legal obstacles—directly or indirectly—against Western businesses competing with Chinese domestic rivals. One only needs to look at the arbitrary and heavy-handed fines against foreign companies in the automotive, consumer products, and technology sectors.

A stunted Netflix taking on the BAT in an unfavorable business environment is not a winning formula. Just look around Silicon Valley: none of its neighbors—Google, YouTube, Facebook, or Twitter—offer regular services in China. Indeed, in every case they have been excluded, as domestic rivals nurtured by the state take market share.