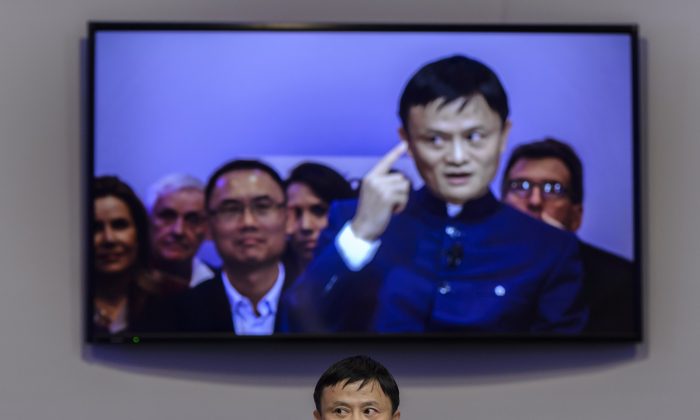 In January, the SAIC singled out Alibaba’s online platform Taobao for selling counterfeit goods and listed the company’s wrongdoings in a White Paper. Taobao responded by lodging a complaint.

In China, it is rare to see a corporation in direct conflict with a powerful government agency. Outside commentators believe this may mean Chinese Communist Party leader Xi Jinping’s anti-corruption campaign has extended to the business community.

Xi’s campaign has already purged many supporters of former Party leader Jiang Zemin. Some of Alibaba’s shareholders have backgrounds with the Jiang faction.

Yahoo recently announced its plan to spin off its stake in Alibaba into a new company. Between that and its clash with the SAIC, Alibaba’s stock value evaporated about US $11 billion overnight on Jan. 28.

Alibaba’s founder Jack Ma’s status as the richest man in mainland China has also been shaken, and his net worth has shrunk to about $19.5 billion.

On Jan. 23, the SAIC released a report stating that less than 37.25 percent of tested Taobao goods were authentic, the lowest compared to other web platforms.

On Jan. 27, Taobao published an open letter quarrelling with the SAIC, accusing SAIC director Liu Hongliang of “procedural misconduct during the supervision process” and “black whistle-blowing.” On the same day, China’s Ministry of Commerce issued a notice supporting SAIC’s crackdown on fake goods.

SAIC responded to Taobao emphasizing that SAIC will continue to strengthen its network supervision in the future.

Taobao then issued a statement that the company is filing a formal complaint against Liu. Jack Ma also stated that the fake goods problem was not caused by Taobao.

According to mainland Chinese financial website Caixin, Tmall has joined the latest round of the battle by complaining about the SAIC’s sampling procedure.

On Jan. 29, the three stores published an open letter questioning the SAIC’s results and asking for a detailed explanation of the sampling.

The Wall Street Journal quoted Hong Kong-based Arete Research analyst Muzhi Li, who said that the government’s publicizing this fight with Alibaba is rare, punishes the company, and indicates a risk to shareholders.

“The government is determined to further escalate this case,” Li told the Journal.

This is not the first time Ma has been caught in a fake goods controversy. In early 2011, Alibaba’s e-commerce site Alibaba Net was exposed for fraud scandal.

In addition to high-risk investment warnings, the media has also reported extensively on the close relationship between Alibaba and the Jiang faction princelings.

This is not the first time Ma has been caught in a fake goods controversy.

On July 21, 2014, the New York Times published an article titled “Alibaba’s I.P.O. Could Be a Bonanza for the Scions of Chinese Leaders.”

According to the article, the four Chinese companies investing in Alibaba have had executives who are sons or grandsons of former or current Politburo Standing Committee members, the most elite group of Party leaders. These include Jiang’s grandson Alvin Jiang Zhicheng and current Politburo member Liu Yunshan’s son Liu Lefei.

The Internet industry is known to have been under the control of the Jiang faction. However, Jiang’s son Jiang Mianheng, a telecommunications magnate, was dismissed from his position as president of the Chinese Academy of Sciences Shanghai Branch on Jan. 8.

Since then, there have been great changes in the business and political environment in China and Hong Kong.

After Xi Jinping took office in 2013, his anti-corruption campaign has extended to the economic field and other interest groups including Jiang’s family. It is suspected that his actions may cause a re-shuffle in these groups and the economic field.

International investors and the financial community are now closely monitoring and evaluating the business prospects of companies that have close ties with the Jiang faction, including the political risks they face.

Jack Ma lives in the shadow of the Jiang faction.

Zheng added that the SAIC’s taking aim at Alibaba is not a simple government action. “It is likely to be Xi Jinping’s signal to clean up the Jiang faction, but it also means Alibaba’s background supporters in the Jiang faction have been weakened,” he said.

Radio France Internationale (RFI) commented that Xi’s anti-corruption campaign probably would not be confined to internal government officials, but would extend to the business community.

Some observers believe that Ma has been accused of colluding with princelings of the Jiang faction, having political ambitions, and holding key information that could be a major threat to national security. Sooner or later, they believe, Ma will become a target for being taken down.