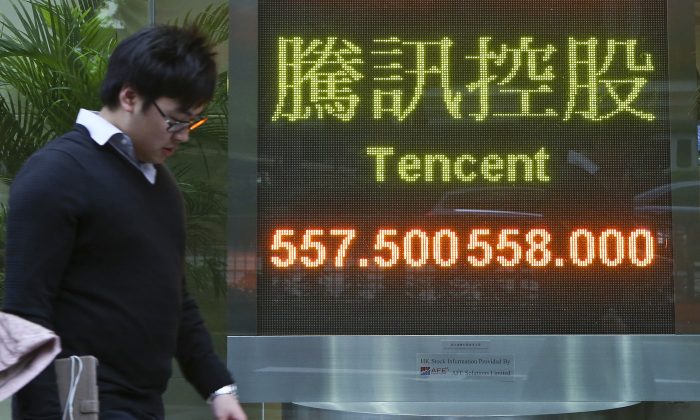 Internet company Tencent Holdings Limited: Shares fell back by 0.69 per cent at end of trading on June 12, 2014 due to false news. (Epoch Times)
China

Later, however, the report was found to be nothing but a made-up story.

Industry insiders have called for authorities to investigate this case of disseminating false information with the intent to manipulate the market.

On June 11, Hong Kong media reported that Tencent’s investment fund would pay more than double on the premium for acquiring SMI. This caused SMI’s share price to jump by HK$0.38 (US$0.05) or 56.7 percent, pushing HK $200 million (US$25.8 million) in trade in half a day and hitting a nine-year high.

That same afternoon, SMI’s stock was suddenly suspended with the price at HK$1.05 (US$0.14). In the evening, the company clarified that there had been no official approach from Tencent’s investment fund.

SMI said the suspension was due to a rights issue and would remain in place until the statement of the rights issue was announced.

Tencent was also involved in an earlier suspected takeover rumor. On June 4, mainland Chinese media reported Tencent’s partial takeover offer for CLS Holdings, which stimulated CLS’s shares to climb 17.4 percent that day with a turnover of more than HK$1 billion (US$129 million). However, CLS announced that it was not aware of any reason for such an increase.

That afternoon, however, CLS chairman Lau Ting had posted information on the WeChat mobile messaging service about the rumors related to Tencent’s acquisition of CLS and about the considerably increased holdings of company stock. Lau was questioned for leaking inside information.

Sources told the Epoch Times that it only took Tencent two years as a private IT company to become China’s Internet leader, thanks to support from the faction of former Chinese Communist Party (CCP) leader Jiang Zemin. Some companies involved in Tencent’s acquisition have known ties with the Jiang faction.

For example, reports have disclosed that major SMI shareholder Qin Hui has been relying on Jiang and his son and earned a profit of more than 200 million yuan (US$32.1 million) in a Beijing nightclub. Another SMI shareholder, Albert Yeung, was accused of being close to Jiang’s supporters Zeng Qinghong and Zhou Yongkang, with his newspaper Hong Kong Daily News using propaganda to attack the persecuted spiritual practice Falun Gong in Hong Kong.

Tencent was involved earlier in share trading with ChinaVision Media Group Limited, whose chairman Dong Ping has been observed to have close connections with Zeng Qinghong’s brother, Zeng Qinghuai.