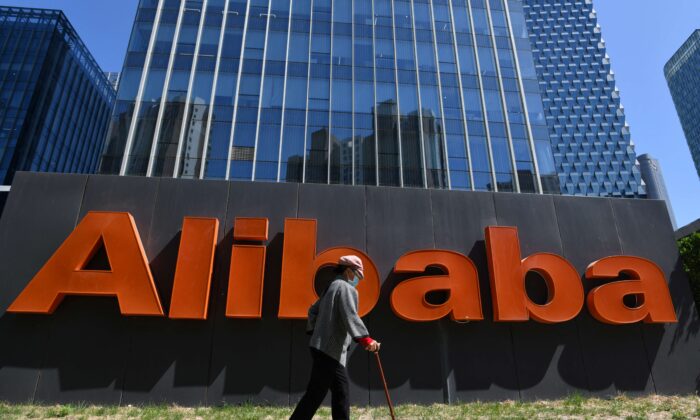 A woman walks past an Alibaba sign outside the company's office in Beijing on April 13, 2021. (Greg Baker/AFP via Getty Images)
US-China Relations

Shares of Chinese e-commerce giant Alibaba (NYSE: BABA) tumbled 10 percent on July 29 after the U.S. Securities and Exchange Commission (SEC) added the firm to a list of companies that could face delisting.

The U.S.-listed Chinese company is among the more than 150 companies named by the SEC that could be booted from U.S. exchanges if American regulators are unable to inspect financial audits for three years in a row.

The firms were identified under the requirements of the Holding Foreign Companies Accountable Act (HFCAA), signed into law in late 2020, that gives Chinese companies until early 2024 to comply with U.S. auditing requirements. The law was passed in response to Beijing’s long-running refusal to allow U.S. regulators to access audit papers of its accounting firms, citing state secrecy. U.S. Congress is currently considering a bill that would accelerate the deadline under HFCAA to 2023.

Alibaba has until Aug. 19 to provide evidence disputing its addition to the SEC list compiled under the HFCAA, the SEC said.

The Chinese e-commerce giant made a blockbuster debut on the New York Stock Exchange in 2014 with the biggest initial public offering at the time. The company also has a secondary listing in Hong Kong.

On Tuesday, Alibaba announced that it would seek a primary listing in Hong Kong, joining other Chinese companies that have sought to shield themselves from heightened regulatory pressure in the United States.

American regulators have been negotiating with their Chinese counterparts on achieving compliance with the HFCAA, but the SEC chair recently expressed uncertainly about the prospect of reaching a deal with Beijing.

In a July 19 interview with Bloomberg, SEC Chair Gary Gensler said the authorities in China are the ones who will ultimately decide whether to allow American regulators to review their full audit reports.

“I just really don’t know right now,” Gensler said, referring to the potential of reaching an agreement. “It’s going to be choices made by the authorities there.”

The HFCAA was enacted in 2020 in the hopes of protecting American investors from fraudulent activities by Chinese companies that are not subject to U.S. audit requirements.

The legislation came off the back of a high-profile accounting scandal involving China-based start-up Luckin Coffee. The company in late 2020 agreed to pay the SEC a $180 million penalty to settle fraud charges for “intentionally and materially” overstating its 2019 revenue and understating a net loss. Earlier that year, the beverage brand said an internal investigation found that its chief operating officer had falsified 2019 sales by about $310 million, prompting Nasdaq to delist the company.

The Epoch Times has reached out to Alibaba for comment.