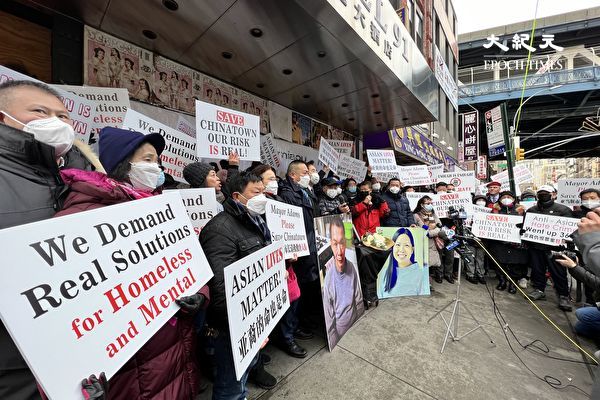 Residents of Manhattan Chinatown gathered in front of the homeless shelter at 91 East Broadway to mourn the deaths of two Chinese randomly attacked and killed by homeless suspects, and oppose the city government’s plan to build a new homeless shelter in central Chinatown. (Hannah Cai/The Epoch Times)
NY News

NEW YORK—Hundreds of people from the Chinatown neighborhood in Manhattan, New York, gathered in front of the homeless shelter at 91 East Broadway to mourn the deaths of two Chinese who were randomly attacked and killed by homeless suspects.

Michelle Alyssa Go, 40, was killed last Saturday when Simon Martial, a homeless man, pushed her onto the subway tracks. In another incident, 61-year-old Yao Pan Ma was beaten while picking up garbage in East Harlem on the evening of April 23, 2021. He later died of serious injuries. Footage from surveillance cameras showed that the attacker kicked him on the head repeatedly at least six times after he was knocked down to the ground.

In addition to two large photos of the victims, a blank photo frame was prominently displayed at the rally.

“We put a frame here to symbolize that the next victim could be anyone,” Jacky Wong, a member of the rally organizer Concerned Citizens of East Broadway Association Inc, said at the event. “The Chinese have never been so worried and fearful. We have no choice but to take to the streets to protest.”

According to New York police, anti-Asian hate crimes surged 361 percent in NYC in 2021, and some of the crimes involved mentally distressed attackers.

“The mentally distressed individuals need help like compassion. But the government failed to create a real solution to address the homelessness and mental health crisis in New York City,” he said.

Wong said that Chinatown is a senior town, and many elderly residents here have families who live outside of Manhattan.

“During the pandemic, many seniors are afraid of going out of their neighborhood because they didn’t want to get harassed. Now they don’t even feel safe in their own neighborhood,” he said.

“Our risk is very real. The city cannot continue to turn a blind eye on the life-threatening risk our seniors are facing,” he said. “We have a very humble request. We are asking all the policymakers, including our mayor … to tell us how we can live. We just don’t want to die.”

Fan Sui Yam, 55, recalled that at around 8 a.m. on June 7, 2021, she was attacked by a homeless African American woman at the exit of the City Hall subway.

“She started punching me so hard in the stomach, said racial words, and ran in the other direction. She is about 5 feet 9, about 200 pounds, and very strong. I was scared and overwhelmed,” Fan said. “I don’t speak English, so I don’t dare to call the police, feeling loneliness, I went home with pain, nowhere to complain.”

She still had a severe stomach ache on the third day, and could not go to work on the fourth and fifth day after the incident.

“I was thinking if I was older I might not survive,” she said. “I’m now afraid of taking the subway and bus, I’m living in fear.”

She said she wanted to tell the new mayor, Eric Adams, that “the Chinatown community is living in fear.”

“Do something. Help us fight the Asian hate crime. Asian lives matter,” she said.

Local resident Chen Kaiming, whose father was beaten by a homeless man two years ago, also spoke at the vigil.

Chen’s father was sitting on a bench on East Broadway, a block from the rally site. A homeless man passed by and wanted to sit on the bench. Chen’s father politely made room for him. However, a few minutes after the homeless man sat down, he suddenly got up and punched the elder Chen in the face without any provocation.

“The vicious attack knocked my father unconscious, and his lower bone of his left eye was fractured and his entire face was covered in blood. Fortunately, a police officer called an ambulance, which brought my dad to the hospital for emergency treatment,” Chen Kaiming said.

“At the time of the attack, my father was 86 years old, and it was the most fearful and painful day in his life. From that day on, he lived in constant fear of being attacked every time he goes on to the street, so much so that he could not personally be here today to share his story.”

The third victim pointed out that the high crime rate is not only a neighborhood safety problem, but will also hurt Chinatown’s economy.

“We already had five shelters,” he said. The “Department of Homeless Services is bringing danger to the neighborhood.”

“I am very angry. I’m sad because we lost Michelle and Mr. Ma … They offend nobody,” Yu said. He said that the city government did not take care of the people who have mentally issues and allowed them to wander around.

Yating Chu, president of PLACE NYC, an education advocacy group, said she was “tired of elected officials coming to these events.”

“The policies that I hear that they support are not ones that are going to make us safer in the city. That’s the problem,” she told The Epoch Times.

“We can have you here giving us thoughts and prayers,” but “the reality is, you support policies that are putting our community in danger,” she said. “Building another homeless shelter here in Chinatown, in front of where we are standing, it’s another assault to the injury to our community,” she said.

Chu urged the officials to keep the mentally ill off the streets.

“I live around here. These are the streets that I walk around when I’m doing my grocery shopping. I really don’t want to be encountering unstable people that need to be off the streets. And I’m asking our elected officials to really have a plan, help these people, help keep our streets safe, and get them off the streets,” she said.

“They are attacking Asians. You know why? That is jealousy, envious of their success.,” he told The Epoch Times. “They  [Asians] are doing well in school, doing well in business. We saw this happen to Jews before, it’s happening to Asians now,” he said.

“We should learn from history. If we don’t stop it now. It’ll just get worse and worse,” he said.

Other than Manhattan Borough President Mark Levine, no other elected officials were present at the rally.