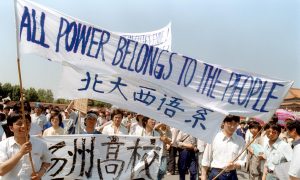 For Chinese, the Tiananmen Square Massacre Is Still Too Taboo to Talk About
0
Share Now
TelegramFacebookTweetEmailTellMeWeReddit
Copy Link 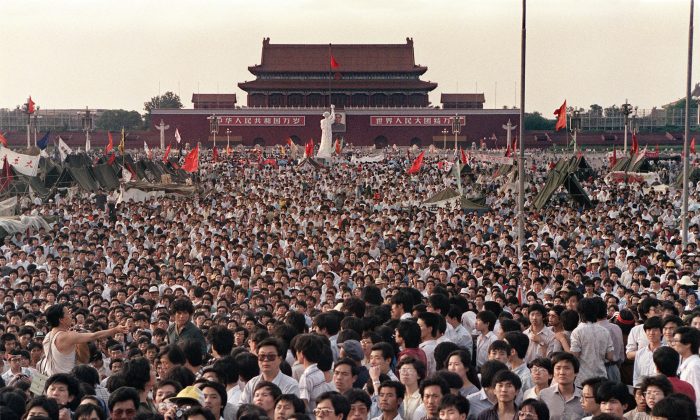 This file photo taken on June 2, 1989 shows hundreds of thousands of Chinese gathering around a 10-metre replica of the Statue of Liberty (C), called the Goddess of Democracy, in Tiananmen Square. (Catherine Henriette/AFP/Getty Images)
China

To get out the censored story of bloodshed in China to visiting Chinese in South Korea, China democracy activists tried a new method—the flash mob.

About 10 members from the China Democracy Party and the Federation for a Democratic China—activist groups formed by overseas Chinese residing in South Korea—gathered at the commercial district of Myeong-dong in Seoul, the nation’s capital, on May 31, according to nonprofit broadcaster Radio Free Asia (RFI).

After handling out leaflets bearing information about the massacre in Tiananmen Square to Chinese tourists, the Chinese activists quickly dispersed.

The group’s leader, Pu Chengxiu, told RFI that they resorted to flash mob tactics to get their message out to avoid arrest and deportation—none of the activists who participated in the activity have legal residency status in Korea.

Also, while South Korea is a democracy that allows strikes and protests, the police are known to be tough in dealing with overseas Chinese, according to RFI. Hence, the China democracy movement in Korea is relatively low key as compared to other places.

Distributing leaflets on Tiananmen flash-mob style may seem like a small and seemingly insignificant deed, but the activists carry out the gesture with a sincere heart, RFI reports.

“We will not forget those heroes who were killed, the hardship of the Tiananmen Mothers, and those who have worked for the freedom and democracy in China for the past 26 years,” said Pu.

On June 4, 1989, the Chinese Communist Party launched a crackdown on the tens of thousands of students who gathered on Tiananmen Square to ask for democratic reforms. There is no official figure of those killed by troops, armored vehicles and tanks of the People’s Liberation Army.

Since the events of that day, the Party has practically wiped June 4 from the collective memory of mainland Chinese through whitewashing history and censoring all references to it on the Chinese Internet.

The Tiananmen Square massacre is still remembered at annual commemoration events organized by overseas Chinese. In Hong Kong, the only Chinese territory where Tiananmen events won’t be suppressed, the yearly candlelight vigil at Victoria Park often draws crowds in the tens of thousands.